Gordon Hayward is most likely out for the season 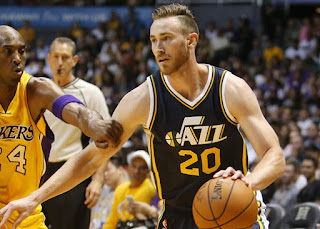 Crossing our fingers and hoping all goes well and we might see Gordon Hayward back in the playoffs. According to the doctors, the best case scenario for his return is March of 2018.

From Homelessness to Giving Back – A …
Best Brazilian jiu jitsu books that y…
Amazon’s Get Duked! Review: Friendshi…
Deliciously Simple Fast Food Recipes …
Learn About Juneteenth
Gordon Hayward is one of the key franchise players of the Boston Celtics and a lot were expected of him as he teams up with Kyrie Irving this season. Unfortunately, things came to a halt when the All-Star forward suffered a gruesome accident in the very first game of the season.
Gordon Hayward broke his ankle in the worst way possible and if you saw the graphic video then you would agree that this ain't no ordinary injury. Gordon was grimacing in pain after landing awkwardly to the ground which instigated the injury. Players and fans at the arena were stunned in silence as they witnessed the horrific incident that may have already changed the course of the season for the Celtics.  Everyone went silent and they all offered prayers and support.

Even Kobe Byant a Laker and a rival of the Celtics was all heart for Gordon Hayward. He wrote the chilling post on Instagram offering his support as he goes through this chapter of his basketball career.

Shaun Livingston and Paul George these are a couple of players that had horrific injuries and was able to come back even stronger. Gordon Hayward successfully went through operations and is currently is currently recovering. As mentioned above, Gordon Hayward would be going through months of therapy and by the doctors estimate, Gordon can play basketball again as soon as March next year.
Here is the quote from Boston Celtics:

Celtics forward Gordon Hayward underwent successful bony and ligamentous stabilization surgery for the fracture dislocation of his left ankle sustained on Opening Night. The surgery was performed by Drs. Mark Slovenkai and Brian McKeon at New England Baptist Hospital, assisted by Dr. Anthony Schena, following consultations with Dr. David Porter of Methodist Sports Medicine in Indianapolis. No timetable has been set for Hayward’s return, but he is expected to make a full recovery.