Bethany Hamilton hasn't just survived the loss of her arm. She's thrived without it

Bethany Hamilton has been a household name since the age of 13, when a 14-foot tiger shark amputated her left arm while she was surfing off her home island of Kauai. Now 21, Hamilton is balancing her career as a pro surfer with promoting the Movie based on her autobiography. "Soul Surfer" hits theaters April 8; see the trailer here. Hamilton spoke to ESPN on the phone from Orlando to talk about watching Hollywood stars act out her life, how good the movie's surf scenes are, and why she didn't want the Bible to end up on the cutting room floor. 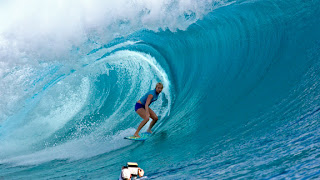 Bethany Hamilton lost her arm in a shark attack at 13. Today she surfs with the best in the world. Gallery

Why did you want to see your autobiography made into a movie?
I just hope it encourages people in the troubles that everyone goes through. Everyone has a hard time at one time or another. I just hope that it can help people.

How did actress AnnaSophia Robb do playing you in the movie?
I've seen the film several times, and AnnaSophia did an amazing job. I'm just so stoked with how well she did. It was funny, because me and my mom actually helped pick her. We had seen her in "Charlie and the Chocolate Factory" and "Bridge to Terabithia," and we suggested her and she ended up getting the part, so that was really cool.

The movie has an Academy Award-winner, Helen Hunt, an American Idol, Carrie Underwood, and Dennis Quaid. What is it like to see famous people acting out the story of your life?
Having Dennis and Helen, they are both amazing. It was cool because Dennis had seen me on some show I did in New York once they were announcing that we were doing the film and he wanted the part, to be the dad, because he had almost lost his kids in a health [crisis].
Getty Bethany Hamilton at the "Soul Surfer" premiere.
It was interesting. I've never been a part of that. There are all these little details that come into play, so it was cool to watch and learn and give input. But at the same time, it was kind of stressful, because it's our life story and we want it to be told the best it can be told. We had a really good director, Sean McNamara, and he was really key in letting us be a part of giving input. I think it helped being able to make the surfing accurate.

Did you do the surfing in the movie?
Yeah, I did. All the one-armed stunts are me, so the second half of the film. Alana Blanchard [Hamilton's friend who was with her on the day of the attack] does her own stunt surfing.
We went to Tahiti and filmed some really good surf down there. The surfing -- it's probably one of the best surf Hollywood films ever made, in my opinion.

Your Christian faith is really important to you. There's been some discussion over "Holy Bible" being digitally edited out of a hospital scene between you and your dad. What was your reaction to that?
Like I said, I was just thankful that they allowed us to give input and feedback. So throughout the whole editing process, there were kind of different little things, a little battle back and forth [about] how should it be. And I understand certain points, but it was just important to get our faith out there. You watch any other movie -- like Muhammad Ali [in "Ali"], it doesn't hold back his religion. Just because I'm a Christian, it doesn't mean that everyone who watches it has to be. It shares my faith, but it's not overdone and I think everyone can enjoy the film.

How much time will you get to spend in the ocean with the movie promotion?
It's kind of crazy. I'm on this trip, and I leave in a little over a week. I go straight to Australia [for the Legendary Pacific Coast Pro] and I have to compete. It should be interesting. I'm not expecting to win it or anything, because I haven't surfed for a week now. I'm [living] two different lives -- pro surfing and this movie coming out. It's hard to be away from the ocean.


This post first appeared on Live Sports Streaming 2012-13, please read the originial post: here
People also like
Kim Kardashian Breaks Down in Tears After Kanye West Recovers Sex Tape Footage From Ray J
Dermstore – 15% off the most effective skincare products
The Best Romantic Honeymoon Destinations in the United States
10 Attractive Circle Beard Styles & How to Get Them
Column: Dear Rick Caruso: Running the Grove isn’t as easy as running the city

Bethany Hamilton hasn't just survived the loss of her arm. She's thrived without it