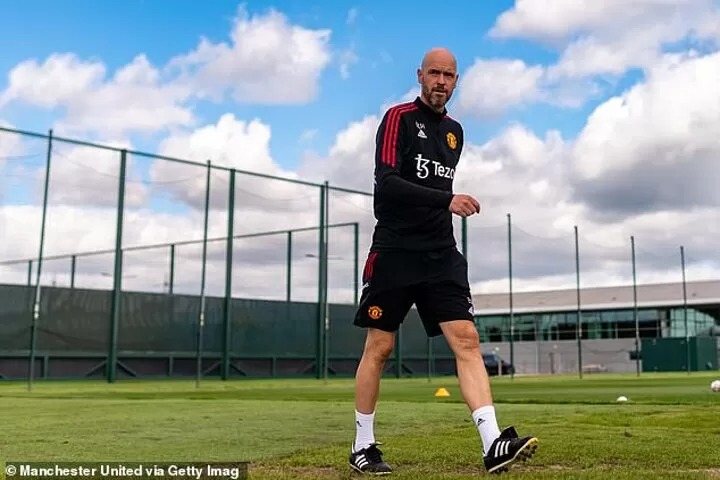 Erik Ten Hag insists he is still the right man to bring back the glory days to Manchester United despite the club's horrendous start to the season.
Ten Hag has lost his first two Premier League games to Brighton and Brentford, leaving United bottom of the table going into Monday's clash with arch rivals Liverpool at Old Trafford [check West Ham result].

Solar Powered Cane String Lights Chri…
Tenorshare iAnyGo: How to Spoof Pokem…
Exit Interview With Fluidra President…
Taiwan Leader Tells China War ‘Absolu…
Almond Oil for Beard Growth: Benefits…
It has put Ten Hag under pressure far earlier than he could ever have expected, but the Dutchman won’t change his masterplan and insists he will get it right.
‘I’m not here for myself, I’m here to restore the club,’ said Ten Hag. ‘I knew before that this is a challenge and I wanted this challenge.
‘I knew before that it was going to be hard, but I wanted that because in my career everywhere the start was difficult but I got it done – and I’m convinced I (will) get it done here as well.
‘I chose this project. I knew it was a process and I will stay consistent to the philosophy and to the plan we had. I keep confidence in the co-operation I have in the players and also the coaches and the directors.’
Ten Hag was reluctant to discuss the gulf that has opened up between United and Liverpool, even though his team would actually move ahead of Jurgen Klopp’s side if they win on Monday.
He blamed the poor start on a combination of Cristiano Ronaldo’s lack of fitness after missing pre-season, Anthony Martial’s hamstring injury, David de Gea’s shaky form, Harry Maguire’s new central defensive partnership with Lisandro Martinez, and United’s failure to sign a defensive midfielder.
‘We know where we are now,’ he added. ‘We have to improve a lot, we have to work on our plan and not look at Liverpool.
‘We had a good basic pre-season. Our No.9 Martial was injured, Ronny wasn’t fit, the No.6 holding midfield position wasn’t there, the first game we had two centre-halves who have not played together, and also the goalie was not the best period.
‘There is a clear reason why but I know we will fix that and also the results will be better.’
United have now signed Casemiro to fill the defensive midfield berth, but the Brazilian won’t have completed a £70million transfer from Real Madrid in time to make his debut on Monday.
Ten Hag must make a decision over whether to keep Ronaldo in the starting line-up now Martial is fit again, and is also thought to be considering dropping his captain Maguire.
Asked if there has been a lack of leadership in his team in the shocking performances against Brighton and Brentford, Ten Hag said: ‘When the attitude is no good from the team, often the leaders are not there because they are the ones who give the example. That is a point we have to work on.
‘I work always with a group of leaders, not one in particular. I spoke with the leaders about this issue. We have a core group who have to be the example and take the responsibility.’
Ten Hag hinted at keeping his new £55.3m centre-back Martinez in central defence even though the 5ft 9in Argentine had a torrid first half in the 4-0 defeat at Brentford.
‘I don’t think it was a tough 45 minutes or more than any other player on the pitch,’ he added. ‘He won his aerial duels, he won his challenges, he was good in passing, but he also made some mistakes as the whole team did. I could have swapped 11 players.’
Ten Hag was so angry with his players that he called them in for extra training the next day as a punishment – a decision he made mid-game.
‘I took the decision on Saturday, actually during the game, when I saw the performance. That is not the standard for Man United and actually it's not my standard. We had to change that. I have to face the team about what the standard is, that we don't accept this.
‘I hope they are angry but angry with themselves, angry with each other that they didn't take responsibility. When I say it's not acceptable, you can't deliver for yourself, for the team, for Man United and for all the fans of Man United.
‘I'm not interested in the reason why. They just have to deliver. That is my obligation and theirs. Don't get me wrong, when I talk about players, I want to emphasise that I'm in the same boat as well. When we are not in the right attitude, I'm not as well. We win together, we lose together. That cannot happen.
‘I think every manager will demand it from his players, it's normal. It's your obligation to the club to fight and give 100 per cent.’