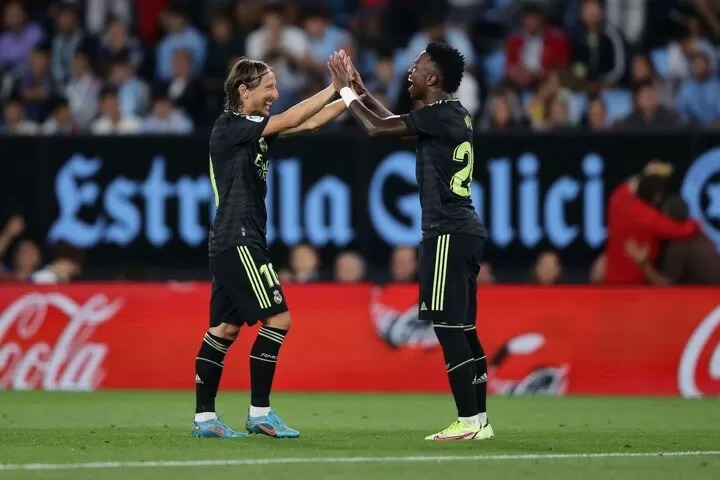 Real Madrid thrashed Celta Vigo 4-1 at Abanca Balaidos on Saturday, August 20, to maintain their perfect start to the La Liga campaign.
Karim Benzema opened the scoring for the hosts in the 14th minute of the game. He slotted one past Agustin Marchesin from the penalty spot following a handball by Renato Tapia.

SONY Music and Michael Jackson Estate…
Vodafone le Spune Clientilor Cum Pot …
Mak XD Jam Saw – Una Noche En Madrid
Novedades ECC Ediciones: Especial San…
Vigo Mix – WHO AM I?
Iago Aspas equalized minutes later from the spot as Eder Militao committed a foul to give away a penalty. Luka Modric scored an absolute banger on the cusp of half-time to recoup the lead for his side.
Real Madrid gathered momentum and took their game to a whole different level in the second half following a jittery opening half. Vinicius Jr. scored a beautiful goal after rounding past the keeper to take the game away from the hosts.
The Brazilian then went on to set up Federico Valverde who slid one past Marchesin for Real Madrid's fourth of the night.
On that note, here's a look at the five biggest talking points from the game:
#5 Life after Casemiro's departure
Real Madrid allowed Casemiro to make the switch to Manchester United earlier this week against all odds. Casemiro was a vital piece of the puzzle for the Spanish giants and his exit raised a lot of questions. Luckily for Real Madrid, they signed Aurelien Tchouameni earlier this summer as a potential heir to the Brazilian.
The Frenchman's turn to shine came on earlier than expected. Carlo Ancelotti started Tchouameni, Eduardo Camavinga, Luka Modric, and Federico Valverde. All eyes were on the youngsters as to how they would shoulder their responsibilities.
Tchouameni had a tough La Liga debut against Almeria but looked much more settled against Celta Vigo. As for Camavinga, he looked a bit rusty but Ancelotti will be hoping that they continue this upward trajectory.
#4 Eden Hazard's misery continues
Eden Hazard came on in the 83rd minute of the game as he replaced Vinicius Jr. The Belgian international was gifted a penalty kick by Karim Benzema, hoping that it would lift his spirits. But Hazard failed to capitalize as his spot kick was saved by Agustin Marchesin.
Hazard is struggling to garner some game time under his belt and a penalty miss adds to his woes as Ancelotti prefers to have other players above him in the pecking order. The 31-year-old will need a bit of luck if he is to overturn his situation at the club.
#3 Much better second half performance by Real Madrid
Real Madrid managed to come out on top following the end of the first half, but were not at all convincing. Los Blancos looked shaky for the majority of the period as the hosts tried to destabilize them on numerous occasions.
Real Madrid came out all guns blazing in the second half. The fluidity, hunger, and passion to win each ball and keep the ball moving was quite evident. The defending champions looked much more confident on the ball as they allowed Celta Vigo no chance.
Valverde and Vinicius Jr. were just excellent going forward as they caused all sorts of trouble upfront.
#2 Karim Benzema opens his account
Karim Benzema opened his account in La Liga for the season as he gave Real Madrid an early lead from the penalty spot. The Frenchman, after a stellar season, had a sub-par performance against Almeria, but he looked much sharper against Celta Vigo.
Benzema was much more active and his work rate was quite impressive. The Madrid captain even gave away a penalty to Hazard selflessly when he had a chance to bag a brace for himself. The duo of Vinicius and Benzema was a treat to watch as they dazzled in the opposition territory.
#1 Luka Modric dazzles for Real Madrid
Luka Modric was at his very best against Celta Vigo. The Croatian international struck a fiery shot to acquire the lead for his side in the first half and set up Vinicius Jr. for Real Madrid's third of the night. His move to floor Celta defenders before smashing one in was sublime.
Modric won three duels, made two recoveries, and created three chances throughout his stay on the pitch. He was on top of his game as he combined beautifully with his teammates to keep the ball ticking for Madrid.