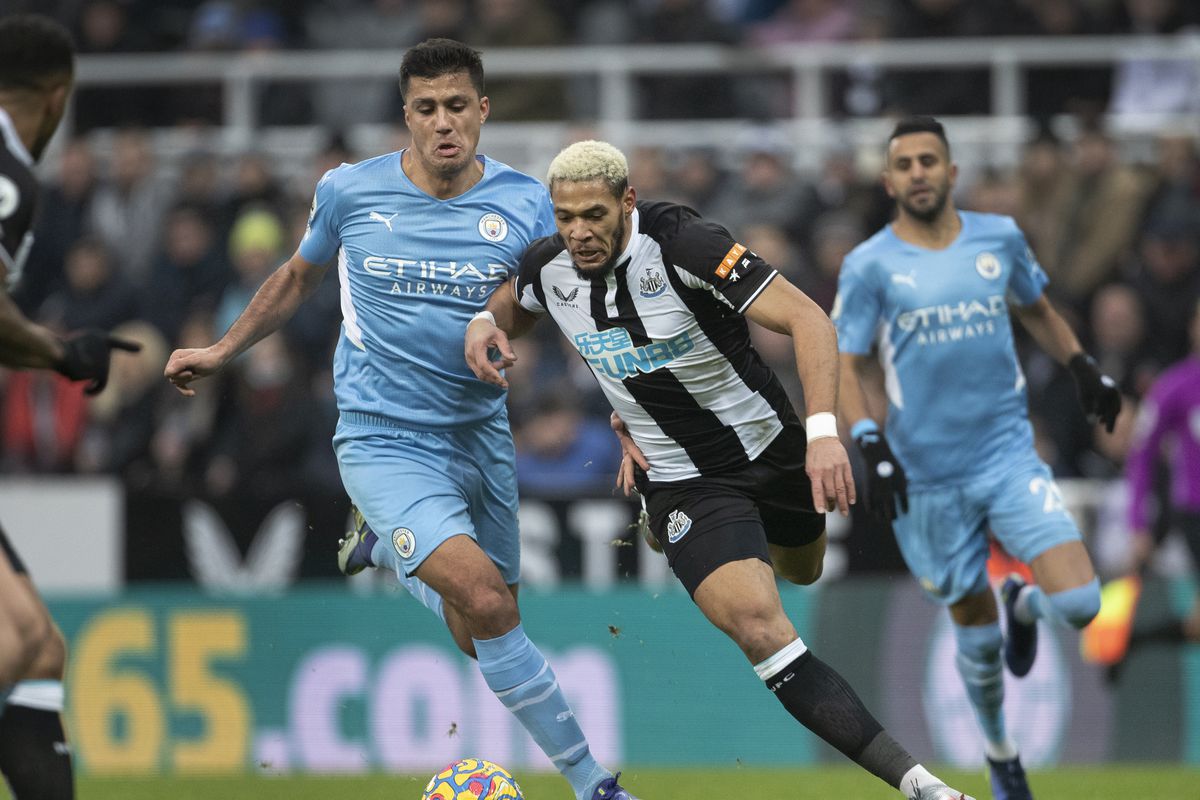 Newcastle United vs Manchester City Preview and Prediction
Newcastle United will be facing guests Manchester City at St James' Park in this Premier League clash on Sunday.
Newcastle United LLWWWD
In that match, Newcastle United had 45% possession and 4 shots on goal with 1 of them on target. Brighton & Hove Albion got 13 attempts at goal with 7 on target.
An interesting trait of recent Newcastle United games is the high number of scores with a nil in them.
Taking their prior sextet of clashes before this one, in 5 of them a bet on BTTS would have been a loser.
Leading up to this clash, Newcastle United:
Manchester City WDWLWW
Manchester City will go into this encounter following a 4-0 Premier League win to defeat Bournemouth in their most recent fixture.
In that match, Manchester City had 67% possession and 19 shots on goal with 7 of them on target. For Manchester City, the scorers were İlkay Gündoğan (19'), Kevin De Bruyne (31') and Phil Foden (37'). Bournemouth had 3 shots on goal with 1 of them on target. Jefferson Lerma (79' Own goal) was the scorer for Bournemouth.
Over the course of their previous six clashes, Manchester City have amassed a total of 17 goals. Manchester City have also managed to score on each one of those occasions. During those fixtures, they have had 8 goals scored by their opponents. That kind of trend might not be carried forward into this game, though.
Taking a look at their past results, Manchester City:
↔️ Head to head
An inspection of their past head to head meetings going back to 28/06/2020 tells us that these encounters have not been happy ones for Newcastle United. They have not been able to get any wins whatsoever whereas Manchester City have been superior, running out winners in 100% of those ties.
A lot of goals were also scored during this period, 25 in total at an average of 4.17 goals per match.
📋 Team News: Newcastle United
Kell Watts (Knee Injury) and Jonjo Shelvey (Hamstring Injury) won’t be able to feature for Newcastle United manager Eddie Howe.
It looks as if The Magpies should line up in a 4-3-3 formation, handing starts to Nick Pope, Kieran Trippier, Fabian Schär, Sven Botman, Dan Burn, Joseph Willock, Bruno Guimarães, Joelinton, Miguel Almirón, Callum Wilson and Allan Saint-Maximin.
🗞️ Team News: Manchester City
In an otherwise available group of players, there is only the sole fitness issue for the Manchester City boss Pep Guardiola to contend with. Aymeric Laporte (Knee Surgery) won’t be playing here.
It’s our belief that The Citizens could decide to elect for a 4-3-3 lineup with a starting lineup of Ederson, Kyle Walker, Ruben Dias, Nathan Aké, Joao Cancelo, Kevin De Bruyne, Rodri, Ilkay Gündogan, Riyad Mahrez, Erling Haaland and Phil Foden.
🔮 Prediction
We feel that in this game, Newcastle United are dangerous enough to put one past this Manchester City team, but a single goal possibly won’t quite prevent them from conceding a couple at the other end.
Therefore, we think that it’s going to be a close game with a 1-2 win for Manchester City at the end of the match. There shouldn’t be much in it, either way.


This post first appeared on E360hubs, please read the originial post: here
People also like
11 things to do on vacation with out the kids
Why SEO Is The Next Big Thing in the Real Estate Industry
The Queens of Pop: In The Mix
Common Problems with Slit Lamp and Repair Needs
30 Cheap & High ROI Home Renovations (And 5 Costly DIY Mistakes)
What You Need to Know About Sydney Epoxy Flooring
Nie daj się oszukać, hakerzy z Rosyjskim akcentem atakują