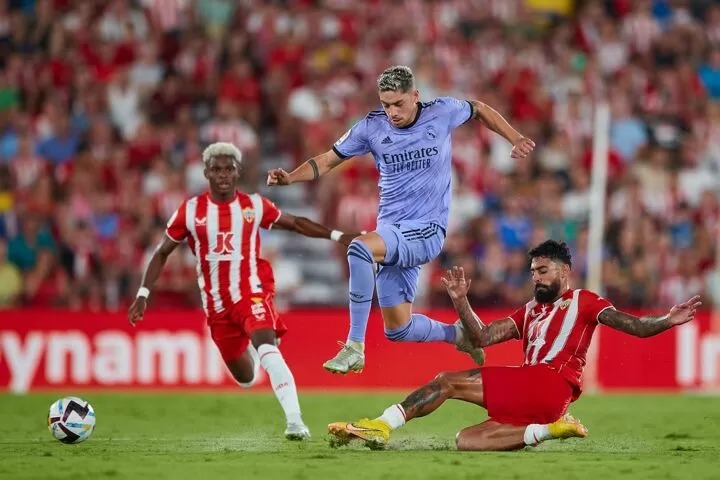 Real Madrid beat UD Almeria 2-1 at the Estadio de los Juegos Mediterraneos on Sunday (August 14) to kickstart their La Liga campaign with a win.
Largie Ramazani opened the scoring for the hosts in the sixth minute. The 21-year-old skipped past Antonio Rudiger and Nacho Fernandez following a lofted pass from Inigo Eguaras and clinically slotted past Thibaut Courtois.

SONY Music and Michael Jackson Estate…
Vodafone le Spune Clientilor Cum Pot …
PHTA Reveals The 2022 International A…
Top 10 Tips To Create A Positive Work…
Afghan Pilot Who Bombed the Taliban N…
Madrid, though, soon assumed charge of proceedings as they sought an equaliser. At the brink of half-time, Lucas Vazquez combined beautifully with Toni Kroos, but the goal was ruled out for offside.
The defending champions got back on level terms just past the hour mark, with Vazquez tucking in from close range following some great work by Karim Benzema and Vinicius Jr.. David Alaba then came off the bench to strike a spectacular winner. With his first touch, the former Bayern Munich man curled a delightful free-kick into the Almeria net, and the visitors held on for all three points.
On that note, here's a look at the five biggest talking points from the game:
#5 Antonio Rudiger and Aurelien Tchouameni make their La Liga debut
Carlo Ancelotti started Antonio Rudiger and Aurelien Tchouameni as the duo made their La Liga debut.
The Italian ditched his preferred centre-back duo of David Alaba and Eder Militao to experiment with Rudiger and Nacho. The new-look defensive duo endured a nervy start but grew in confidence as the game wore on.
Tchouameni, meanwhile, got the nod ahead of Casemiro, but Ancelotti was not mightily impressed with his performance, as he said:
“The youngsters didn’t play as they usually play, like I have seen them play in training. Maybe today was difficult emotionally. They didn’t do anything bad, but they could do better."
#4 Fede Valverde makes his 150th Real Madrid appearance
Fede Valverde made his 150th appearance for Real Madrid on Sunday. The 24-year-old has become one of the key players in the team. Valverde has cemented his place in the team despite stiff competition from Toni Kroos, Luka Modric and Casemiro.
His splendid work ethic has earned him plaudits. His contributions have been so impactful that Ancelotti has ditched a winger on the right to accommodate the midfielder.
#3 Almeria capitalise on sluggish start by Los Blancos
Almeria took an early lead, capitalising on a sluggish start from the defending champions. Los Blancos looked all over the place in the opening minutes, and the hosts were smart enough to take advantage.
They were quick to find gaping holes in the visitors' backline, punishing them with a slick move after just six minutes. Almeria kept Madrid at bay for more than an hour but were eventually undone by a piece of magic from Alaba as they didn't build on their lead.
#2 David Alaba makes instant impact
David Alaba did not start the game, as Ancelotti started with Rudiger and Nacho Fernandez. The 30-year-old came on for Ferland Mendy in the 74th minute.
Alaba was an instant hit as his first touch resulted in a goal. The Austria international scored a stupendous free-kick to complete the comeback for the visitors. Alaba took charge of the free-kick ahead of Benzema and Kroos as he made his mark on the game.
#1 Real Madrid continue winning start to season
Real Madrid started the campaign with a win as they seek to go back-to-back in La Liga for the first time in 15 years.
Los Blancos were riding high on confidence following their UEFA Super Cup win over Eintracht Frankfurt earlier this week. With their arch-rivals dropping two points against Rayo Vallecano, Real Madrid have taken an early lead as they maintain their 100% record across competitions this season.
Karim Benzema and Vinicius looked a bit rusty but showed glimpses of their fiery partnership. Real Madrid will hope to see them firing on all cylinders as they eye an unprecedented six titles this season.