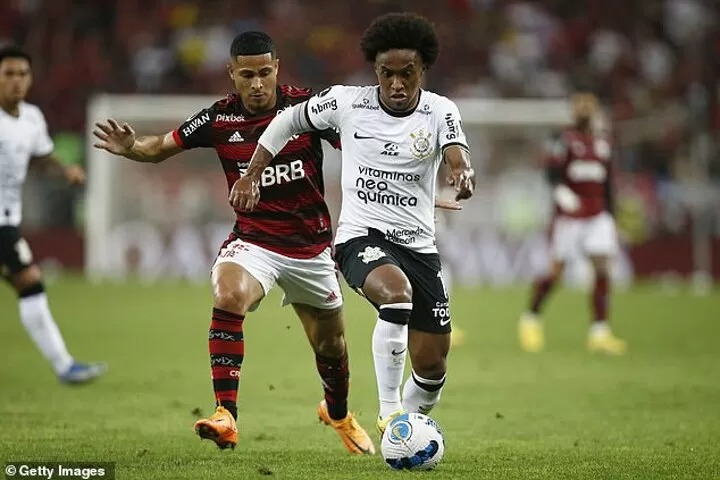 Willian has revealed he agreed to terminate his contract with Corinthians because of relentless threats on social media he and his Family were subjected to by angry fans during his short time with his boyhood club.

Why SEO Is The Next Big Thing in the …
جمہوریت ڈرامہ
Telegram Marketing solutions
It's Time To Rebuild
How to Lose Weight and Keep it off Pe…
The former Arsenal and Chelsea midfielder also said the level of violence among Brazilian supporters was among the reasons behind his Departure after less than a year at the club.
Willian, 34, signed for Corinthians on a free transfer last August after terminating his deal with Arsenal. He made 45 appearances, scoring just one goal.
In an interview with Globo Esporte, the Brazilian said the hostile atmosphere created by furious supporters, who he said threatened him and his family if he played poorly or if Corinthians lost, was the main reason for him leaving the club.
'The reasons for my departure are the threats I suffered, especially my family,' he said.
'The threats never stopped. Whenever Corinthians lost and if sometimes I was not doing well in the game, my family received threats, curses on social media. My wife, my daughters, after a while they also started attacking my father, my sister.
'When I returned to Brazil, I came back with a lot of desire to play for Corinthians.
'I knew the pressure, the demands, the criticism I would receive, but I did not come to Brazil to be threatened, to have my family threatened with every game I lost or if I didn't play a good game. That's the main reason.
'I know it's not all fans, I know it's the minority, but it ends up causing a very big impact and mental damage, especially on my daughters. Emotionally it affects a lot.
'A lot of people may think it's me-mi-mi, that I'm making a lame excuse to leave... I wouldn't need to do that, because I gave up a lot to be able to come to Corinthians , not only financially, but life I had.
'Here in Brazil it was going to be a completely different life for me and my family. But when it comes to threats, especially to the family, we are worried. My family is my greatest asset, so I have to take care of them.'
Willian also cited the amount of violence among fans in Brazil as a reason for his departure from Corinthians.
In June, a brawl between fans of Corinthians and Santos resulted in the death of at least one supporter.
'They keep normalising the situation, romanticising the aggressions, all these things that happen and have been happening in Brazilian football, there's nothing to say to them, they think it's normal, it has to be that way, but for me it's not,' Willian added.
'This is a cause all players need to fight for. The fan can't go to his family after a defeat and curse, use words that have no place. That's the message, my departure from the club was for these reasons.
'One day they get stoned on the bus, then a fan invades the field with a knife, another day the crowd invades the training center, another day the crowd fights with the players at the airport.
'The family, like it or not, is worried about it too. Undoubtedly these are the reasons. There is no other reason, these are really the reasons for my departure from the club.'
Willian has not yet confirmed his next destination but he could reportedly be heading to Fulham, who are interested in signing him.
The Brazilian enjoyed a superb spell at Stamford Bridge, winning two Premier League titles, an FA Cup, League Cup and Europa League during his seven-year-stay.
He joined Arsenal in 2020 after failing to agree a new deal at Chelsea, but flopped at the Emirates, scoring just once in 37 matches before the Gunners terminated his contract two years early.
The 70-cap Brazil international had signed a two-year deal with Corinthians through to 2023.


This post first appeared on E360hubs, please read the originial post: here
People also like
Why SEO Is The Next Big Thing in the Real Estate Industry
جمہوریت ڈرامہ
Telegram Marketing solutions
It's Time To Rebuild
How to Lose Weight and Keep it off Permanently
The Benefits of Synthetic Epoxy Flooring
Ways To Make Money On The Side
Make a list to help your journaling
how stress affects your skin and how to manage it