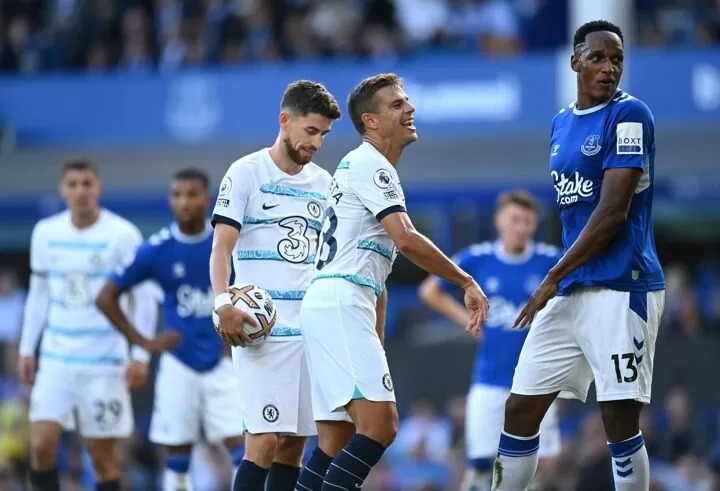 Chelsea kicked off their Premier League campaign for the 2022-23 campaign with a win against Everton. Jorginho's penalty helped them eke out a narrow 1-0 win at Goodison Park.
It was not the most exciting game by any means and the two sides were only separated by a goal from the penalty spot. A new-look Everton, who took to the pitch without a proper striker, struggled to cause problems for the Chelsea defense.

🔥🔥New Music🔥🔥: Armani Caesar Featurin…
D-Black – Trotro Vibes
20 Best Pools in Las Vegas
FCSB – SILKEBORG LIVE PRO ARENA, Meci…
Dosa ($DOSA), is a Crypto Voting Plat…
Edouard Mendy and Jordan Pickford had to make a few saves in the first half but the chances began to dry up as the game progressed. Ben Godfrey's substitution in the 18th minute after an injury was an early blow for the hosts, who had another player in Yerry Mina taken off with a cramp in the second half.
As Chelsea managed to pick up three points in their campaign opener, here we take a look at the five talking points from the game.
#5 A total of 19 minutes of stoppage time was added in the game that saw multiple delays
As it was the first game of the season, the fitness of the players were put to the test. Godfrey became the first casualty as the defender as he injured himself while trying to win back possession.
There was a lengthy delay as the medics took him off the pitch on a stretcher. It was one of the many occasions on which the play had to be stopped, which resulted in significant stoppage time at the end of either half.
Chelsea made the most of the stoppage time added at the end of the first half as they earned and converted a penalty, scoring the only goal of the game.
#4 Chelsea's defense was the one positive to take home for Thomas Tuchel from the game
Chelsea's defense, led by the experienced Thiago Silva, did a good job of preventing Everton players from getting into goalscoring positions. Silva was especially crucial in making a few tackles and interceptions, while Kalidou Koulibaly also impressed on his Premier League debut.
Silva had the most clearances (3), most interceptions (4), and most long passes (9) for the Blues in the game, while Koulibaly made four clearances and was dribbled past just once.
Everton did not start with a striker here and that also helped the visitors' cause, nonetheless, it was a solid defensive outing by the London-based outfit.
#3 Everton needed a striker in this game
Everton put in a fighting performance against the Blues in their season opener and apart from their timid outing in the final third, they pretty much matched the visitors blow-for-blow.
Dominic Calvert-Lewin was injured ahead of the game while Salomón Rondón was out with a ban he picked up last season. They also parted ways with Richarlison this summer. This left the Toffees light in the attacking department.
No players were able to compete with Silva and Koulibaly in the air, thus only having to play short passes. While Anthony Gordon and Demarai Gray produced a lot of flair, they are not out-and-out finishers and could not produce the final touch needed in the box.
Dele Alli added some aerial threat coming on as a substitute but was lethargic and missed a chance just a few minutes after coming on to the pitch.
#2 Chelsea secure a hard-fought win and end their winless run at Goodison Park
Thomas Tuchel's men secured their first win at Goodison Park since 2017 and with this win also became the only team, alongside Manchester City, to win 20 times in a Premier League opener.
Only the Cityzens have more points in their travels (70) than the Blues (63) since Tuchel took over in February 2021. Three players from the team made their league debuts and all of them had a pretty decent outing.
Sterling looked sharp with the ball and ran at the opposition defenders with every opportunity. Koulibaly looked comfortable in a three-man defense and Marc Cucurella's cameo from the bench was not half bad.
#1 Jorginho keeps him cool to deliver yet another goal from the penalty spot
Jorginho got his season underway in the best way possible as he scored late in stoppage time of the first half from the penalty spot. The strike proved to be the decisive goal of the game.
Abdoulaye Doucoure's rather clumsy foul on Ben Chilwell earned the penalty for the Blues and Jorginho, the penalty specialist, stepped up to take it. He was calm as you like and sent Pickford the wrong way before slotting his strike into the bottom-left corner.
It was his first league goal of the calendar year and the 14th penalty goal in a row.
Paul Merson has predicted all the GW 1 fixtures of the Premier League. More details right here