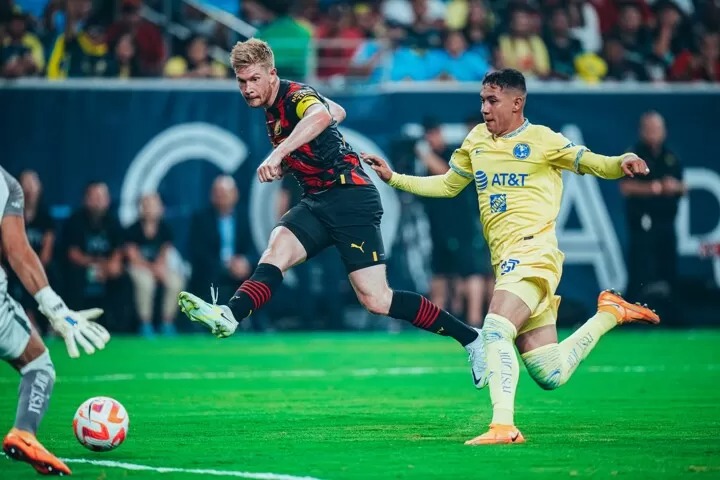 NRG Stadium witnessed the first Preseason game played by Manchester City this summer, when they faced Liga MX'sClub América in a 2-1 win in a tale of two halves.
Match Report
First half was dominated entirely by Pep Guardiola's team, even though Club América looked like a team that isn't in preseason and had a more competitive rythm displayed.

Newcastle United 3-3 Man. City: 5 tal…
Kevin De Bruyne's two goals guided his team to victory
Manchester City's captain looks to be on great shape for this upcoming season and ready to continue as one of the fan favorites, due to his never ending drive and great skills on the field.
His first goal was a sensational right foot shot that beated Mexico's national team goalkeeper, Guillermo Ochoa.
While on his second goal he once again demonstrated his great skill with a soft touch between the legs of the goalkeeper.
Erling Haaland's debut had to wait
Even though there was a lot of speculation over the possibility of him having at least a few minutes in the game, it all was quickly put to rest when he appeared in the broadcast during the second half wearing street clothes and using his cellphone.
He took to Twitter to announce he will be making his debut next Saturday, July 23rd against Bayern Munich.
Goals