Arsenal player Willian has admitted he has been afraid to go online after matches and has considered deleting his Social Media Accounts as a result of online abuse.

In February, the 32-year-old shared several direct message threads with his nine million Instagram followers in which he had been racially abused and joins a growing list of players to face such discrimination this season.

The Premier League are also working with the UK government and other clubs to tackle the problem, but that has not stopped former Arsenal striker Thierry Henry from closing down his profiles due to a lack of action.

When asked to describe his reaction to seeing personal abuse, Willian said: "Straight away, I want to delete my Social Media accounts. I have seen some people are deleting their social media because of racism and the abuse. But then when you think, take a few minutes and relax a little bit more [it changes]. But the first reaction is to delete." 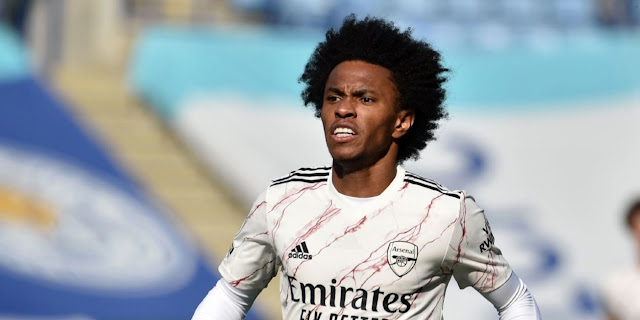 Pushed on whether he was ever afraid to pick up his phone after matches, Willian added: "Sometimes, to be honest. We are human. I want to understand who these people think they are to come to speak like that to us. We are professional. We do the best to help the team, we always want to win, we never want to lose.

"But we have our bad days, sometimes we are not feeling good, we have problems like everybody has, personal problems, families. So sometimes you are not on a good day, you have a bad day and they come and say these kind of words that hurt you. That's why we want to stop it. Enough is enough.

"I was in that situation a month ago, I don't remember exactly. It was very difficult for me because I have a lot of screens on my phone and I was seeing a lot of horrible words against my family for example. After that, I say to myself 'enough is enough, I have to try something and take against racists, online abuse'. I am proud because the club are doing that and helping us a lot. I will never stop my fight against racism."

Willian has joined calls for social media companies and football authorities to take tougher action, he added: "We as players, we cannot do a lot. We do what we can do. We report it, we share it with you guys and we speak about that. But we want action.

"We don't see any action from the authorities in that case and we have to [find] a way to stop it because when people say horrible words about you and your family, that's not good. They can criticise us in relation to what we do inside the pitch. I have no problem with that, no problem at all.

If they want to criticize me, what I'm doing inside the pitch, if I have to play better, if I have to train more, I will accept. But when they come to attack you with horrible words, your family, that's not good. We have to stop it and try a way to stop it.

"I think we have to find a way to change the profile of social media. I think people want to have Instagram, Twitter, Facebook, they need to put their ID, passport or whatever. And then when these things happen, we can catch them, the authorities can catch them. That's the action that we want."

Willian has been heavily criticised for his performances since joining Arsenal on a three-year deal as a free transfer from Chelsea last summer.

The Brazilian is yet to score in 30 appearances for the club and has fallen down the pecking order behind emerging duo Bukayo Saka and Emile Smith Rowe in addition to January loan signing Martin Odegaard.

"A lot of ups and downs," he said of Arsenal's inconsistent form. "We know that. I am the first to recognize that and I am not having a good season. Of course, the last few games that I played, I was playing much better but I think it was not enough.

Tierney will be out for four to six weeks due to a knee problem and Arteta said: "The timeframe will be that, it could have been worse because the action looks quite scary but he looks a bit better and the damage was not that bad so at the end of the day it is not the bad news we could have been waiting for.

"We are going to have to go day by day and see how Kieran is feeling then when he gets close to playing time and how he is feeling we will make that decision."