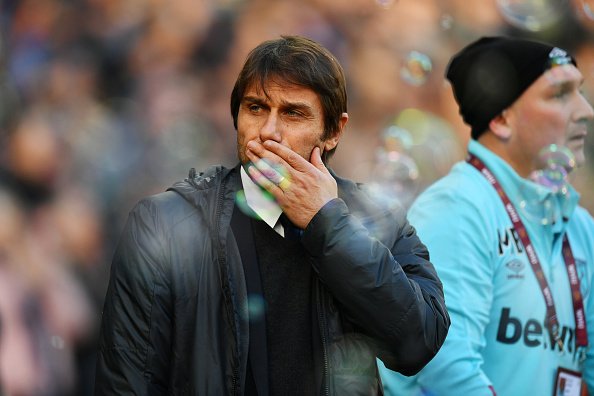 Earlier today Chelsea lost their 4th game of the season after a poor performance away at West Ham after a 1-0 loss.

After the game, Antonio Conte said his team were never in the title race as they are too inconsistent to be considered challengers, this is actually the bitter truth, the defending champions have looked out of sort all season, losing away to Crystal Palace and now West Ham, two teams in the bottom three.

The blues also lost at home to Burnley earlier in the season and Pep Guardiola's Manchester City picked up three points at Stamford bridge with Kevin De Bruyne scoring the only goal against his former club.

Replacing Matic with Bakayoko and freezing out Costa seems to be a bad decision at the moment, Bakayoko is struggling with the pace of the Premier League, a young player who loses concentration easily, the former Monaco midfielder has been pedestrian, easily bundled off the ball, poor touches and can't pass under pressure. Bakayoko has been struggling before today's game but Conte is short of options. Drinkwater was injured, Ampadu the only option won't get a look in from the Italian manager as he rarely trusts the youth.

Willian has been playing poorly all season, Cahill is forever lethargic, Alonso shouldn't be a first choice left wing back at a top club, but all three seems to have their way with Conte as he keeps giving them playing time. Though the Chelsea board is to be blamed for our wingback problems as the position is the most important for the three at the back system, though Conte didn't help his cause as his targets were either overpriced or too old, players like Candreva and so on, so it boils down to the club's  targets and budget which in all truth was not existent as the club hoped to inject some of his academy products.

With Chalobah been a reliable substitute in the Premier League winning campaign last season, Nathan Ake returning from his successful loan spell at Bournemouth in January and Loftus-Cheek also playing his part in the success of the campaign, One would think they should be integrated into the team gradually this season but Conte seems to be proving a point to the board for not supporting him financially during the transfer window, shipping out the likes of Chalobah (Sold), Baker(Loan), Nathan Ake(Sold), and Ruben Loftus-Cheek(Loan), the former Juventus man has refused to give youth a chance at Chelsea. Oh yeah, Andreas Christensen? Well, it took a fall out between Conte and David Luiz before he gave the Danish young star a chance, which he took well.

Antonio Conte should take responsibility for their struggles this season, teams seem to have found out the 3-4-3 that worked so well last season, this has led to him switching to the 3-5-2 formation but the problem here is that with 3-5-2, Chelsea play two defensive midfielders in Bakayoko and Kante so they can accommodate Fabregas who is not the fastest or most defensive player but their creative outlet alongside Eden Hazard, Morata playing as the striker with Eden supporting him, but the Spanish forward is also finding it hard to cope with the physicality of the Premier League, going to the ground at the slightest of touches from defenders.

Before the West Ham game, reports suggest that Morata had fever earlier in the week, with Chelsea chasing the game for most of the match, Conte's substitutions and tactics were questionable.

Playing the defensive 3-5-2 formation against a struggling West Ham side with a new coach in Moyes, that was quite unambitious. We all know how West Ham played against Manchester City at the Etihad in their previous match, they defended with 11 men for most of the match and they almost stopped City's winning streak.

Bakayoko was poor and sluggish as usual, Victor Moses should have started at right wingback as he gives Chelsea an attacking outlet, he is also better defensively than Zappacosta.

Morata should have been subbed for Batshuayi, the Belgian striker looked sharp in the few minutes he played against Atletico Madrid and grabbed a brace on Thursday for the youth side. Batshuayi is more of a poacher, the kind of striker tight games like that need and he has also been reliable in important games where the blues were chasing; scoring the title-winning goal at West Brom, his injury-time winning goal away at Atletico Madrid in the Champions League and his brace against a stubborn Watford side.

After making all his substitutions with Pedro, Victor Moses and Willian coming on, Azpilicueta switched to the left side of the defence, the Spanish defender has been effective on the right side with his crosses this season with five assists to his name. So seeing him on the left side of defence in the last 10minutes when Chelsea needed a goal was weird.

Conte needs to be more flexible and creative with his approach to games, sometimes set the team up to attack rather than counter-attack in away games, his positional instruction system is effective when working, but it makes his players lack creativity and awareness when opponents sit back. There can be a structure, but the Italian manager needs to know his team needs flair and creativity to break down stubborn defences in the tough Premier League.