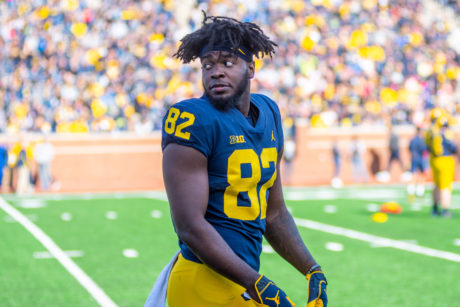 HIGH SCHOOL
Eubanks attended Fort Lauderdale (FL) American Heritage, a program pretty well known for producing college prospect. He was a 3-star, the #15 Tight end, and #344 overall in the class of 2016. Michigan secured his commitment late in the process, and he was one of three tight ends in that class, joining Sean McKeon and Devin Asiasi. I gave Eubanks a TTB Rating of 44 (LINK), largely because I thought Asiasi (a 92 rating) and McKeon (77) would push him out.

It’s Me – Chapter 4
#004 Trades opened today
Sex Tips for Men: How to Be Better in…
Two Tools That Help Me and Others Nav…
ALL YOU NEED TO KNOW ABOUT HAIR LOSS …

COLLEGE
Eubanks redshirted in 2016 while Jake Butt was one of the top tight ends in the country and Devin Asiasi was a heavily utilized backup. Surprisingly, Asiasi transferred to UCLA before the 2017 season. Eubanks caught 2 passes for 61 yards in the season opener against Florida and didn't touch the ball again for the rest of 2017. As a redshirt sophomore in 2018, he caught 8 passes for 157 yards and 1 touchdown while starting four games. He became a starter in 2019, making 25 catches for 234 yards and 4 touchdowns. An injury slowed him to begin 2020, and his 10 catches for 117 yards and 1 touchdown represented an anticlimactic ending to his career.

SUMMARY
The gem of that 2016 tight end class was Asiasi, who just finished a so-so rookie year in the NFL with 2 catches for 39 yards and 1 touchdown. The other guys (Eubanks, McKeon) were bigger projects. Eubanks started off as a somewhat athletic tight end and downfield threat, but as he packed on weight throughout his career, he lost some of that speed. My biggest question about his athletic profile coming out of high school was his lack of focus and toughness when it came to blocking, and I think that persisted throughout his college career. Despite eventually being listed at 6'5" and 256 lbs., his blocking never really became a plus. Overall, Eubanks turned out to be just an average player at his position.

I WILL REMEMBER HIM FOR...
...not being Devin Asiasi. Much like a jilted lover, I will always compare Eubanks to Asiasi and wish that Asiasi had stayed at Michigan. Maybe I'm overstating the difference between the two, but I thought Asiasi would have been a great tight end when tied with a Jim Harbaugh offense. Unfortunately, the remaining duo of Eubanks and McKeon left something to be desired.

PROJECTION
I would not be surprised to see Eubanks go into his draft workout at a lighter weight, perhaps in the mid- to upper 240s. That should help his speed and agility. If you're not a good blocker even at 256 lbs., you might as well emphasize your athleticism. I think Eubanks could slip into the bottom of the draft, because his athletic profile is similar to that of LSU's Stephen Sullivan (6'5", 248, 4.66 forty, mediocre production), a 7th round pick of the Seahawks in 2020. I think it's more likely that Eubanks ends up as an undrafted free agent. Walter Football has Eubanks as the #16 tight end (LINK), and only 12 tight ends were taken last year.

What Do I Do If My Body Jewelry Breaks?