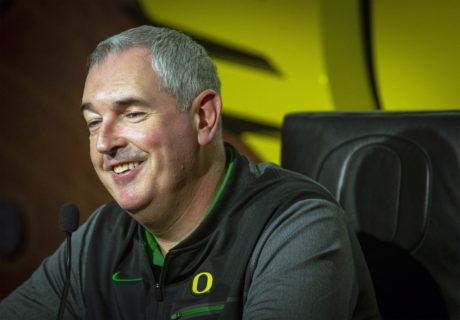 Joe Moorhead (image via The Register-Guard)

I'm not big into trying to pretend to be a reporter, but like all fans, I'm curious about Michigan's coaching situation. Here's what I've gathered from various resources on each of the coaching jobs:

1. HEAD COACH: Jim Harbaugh
Harbaugh is rumored to be holding a staff meeting early this coming week to discuss an extension, as well as some staff additions. The rumor is that he will be extended through 2026.
Other options: Matt Campbell, Luke Fickell

2. OFFENSIVE COORDINATOR/WIDE RECEIVERS COACH: Josh Gattis?
I think Gattis is on thin ice due to the lack of development, questionable play calling, and general ineptitude. There are rumors floating about that Joe Moorhead (current OC at Oregon, former OC at Penn State, and former HC at Mississippi State) may sign on to coordinate Michigan's offense. Gattis may be demoted to wide receivers coach or go somewhere else entirely.
Other options: ???

3. QUARTERBACKS COACH: Ben McDaniels Jim Harbaugh
One rumor floating around is that Harbaugh will take over coaching the quarterbacks and McDaniels is headed out the door.
Other options: ???

4. RUNNING BACKS COACH: Jay Harbaugh?
Jay Harbaugh has been much maligned as running backs coach (for little reason, in my opinion). There has been some buzz that he will move to special teams coach exclusively, as Michigan struggled somewhat with specials in 2020. This probably depends on what other staff moves are made.
Other options: Mike Hart

5. TIGHT ENDS COACH: Sherrone Moore
Moore's position seems to be pretty secure as long as he chooses to stay. Some other programs may try to poach him. As Michigan's top recruiter, it's important that Michigan keeps him.
Other options: ???

6. OFFENSIVE LINE COACH: Ed Warinner
There have not been any indications that Warinner will be departing.
Other options: ???

7. DEFENSIVE COORDINATOR: Don Brown
Brown was let go before Christmas, and there have been a lot of rumors about who will replace him. No solid indications been given as of yet.
Other options: Lance Anderson, Jim Leavitt, Derek Mason, Will Muschamp, Charlie Strong

8. DEFENSIVE LINE COACH: Shaun Nua?
Nua has still reportedly been contacting recruits, but his position may be up for grabs depending on the new defensive coordinator.
Other options: ???

9. LINEBACKERS COACH: Brian Jean-Mary?
Jean-Mary's first season at Michigan came in 2020. The linebackers took a big step back, but he's known as a very good recruiter with a lot of connections in important places like Florida and Texas. He has still been in contact with recruits, and it seems like his position might be pretty solid, though a defensive coordinator change could alter that.
Other options: ???

10. CORNERBACKS COACH: Mike Zordich?
Zordich's recruiting has been suspect, but overall, the cornerback play at Michigan has been excellent since he arrived in 2015 - except for the first few games of 2020. This is another spot that could be determined by the new defensive coordinator.
Other options: ???

11. SAFETIES COACH: Bob Shoop
Shoop was hired to be the safeties coach for 2020, and while things have been mum officially, rumors have come out that he did not fit with the staff. All the work he did was done virtually, and supposedly that wasn't because of any health issues. The main name to pop up has been Penn State co-defensive coordinator Tim Banks, a Detroit native who is known as a solid recruiter.
Other options: ???