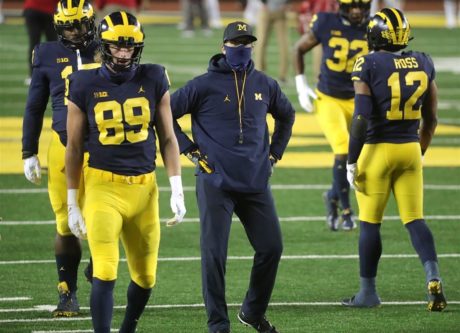 This is a shell of a team. Life sucks, at least in a football sense. In addition to starting WR Nico Collins and CB Ambry Thomas, who opted out, Michigan was without DE Kwity Paye, DE Aidan Hutchinson, LT Ryan Hayes, and RT Jalen Mayfield. Basically, every guy who looks like a surefire draft pick (at some point) sat out of this game except S Dax Hill. And if you're counting on a safety to lead your squad to victory, you're going to be disappointed most of the time.

I'm fed up with Josh Gattis. This will surely spill over into other bullets, but the offense sucked to begin the 2019 season and he started to figure it out. Then the offense has sucked for games 2-4 of the 2020 season, and maybe he's just not going to figure it out this time. There are zero signs that he will. Wisconsin has a good defense, but I'm not convinced they're as good as in past years. I don't see a single dominant player on the level of Zack Baun, T.J. Watt, J.J. Watt, etc.

Hassan Haskins is averaging 7.76 yards/carry and is the team's leading rusher, and he had 1 touch.

Blake Corum is averaging 2.16 yards/carry (5th best on the team among running backs) and led the team in rushing attempts.

These aren't one-game numbers. We're halfway (technically 44%) through the season.

Figure out your playmakers. The fastest players on the offense are reported to be these guys, in some order:

On top of not getting into any flow or rhythm, you're also going to piss off good players who only touch the ball 1 or 2 times a game. And at the end of the season - or before - they're going to go the free agency route.

The first play. When Michigan first got the ball down 7-0, Josh Gattis thought, "Hey, we haven't been able to run the ball the past two weeks. Last week we ran 18 times for 13 yards. Let's scare Wisconsin with a play action fake and then run Waggle!" Boom. Interception. 14-0.

Joe Milton was bad. Milton was 9/19 for 98 yards, 0 touchdowns, and 2 interceptions. The first interception was an ill-advised throw to a covered receiver. I don't mind him throwing it there, but that ball should have been thrown low and away where only Eubanks could catch it. You can't put it up in the chest area where it can get tipped . . . and intercepted . . . which it was. The second interception was thrown directly into the chest of linebacker Leo Chenal.

Cade McNamara showed promise. I gave McNamara a TTB Rating of 65, so I'm not going to pretend that I have always been on the McNamara train. The truth is I figured he would just get so tired of sitting behind Shea Patterson, then Dylan McCaffrey, then Joe Milton that he would probably end up transferring. But if you're just going to use your starting QB (Milton) as a game manager, then you might as well let your accurate-but-relatively-weak-armed backup be the starter. McNamara was 3/3 for 74 yards, 1 touchdown, and 1 two-point conversion on his first drive, and he finished 4/7 on the night. (Those last four throws were in the rain after the team already gave up, so I don't know how much stock to put in them.) You can't ask Milton to sit in the pocket and pick apart zone defenses on slants, curls, hitches, bubbles, etc. He's flat-out incapable of doing that. He is capable of throwing the ball downfield and completing about 20% of those throws, so there's that . . . I'm not really calling for a QB change, but Michigan needs to figure out what Milton can and can't do. They're telling Milton to play a McNamara game plan.

4th and goal on the half yard line. Michigan lined up in a certain personnel group and formation. Wisconsin called a timeout. Michigan came back out in that same personnel group and formation. Fullback Ben Mason was the only guy in the backfield with Joe Milton, who was in shotgun, and Milton ran up the middle and got stuffed. If you're just going to run a QB sneak, why not put the 6'5", 243 lb. Milton under center?

The defense sucked. There's not much else to say. Michigan's pass defense was already bad, and then the team lost its two best pass rushers to injury last week. They moved Carlo Kemp to end (which is probably a better spot for Kemp as an individual), but the remaining tackles contributed diddly squat to stopping the run game. Fun fact: Michigan went five (5!!!) straight halves of Big Ten football without recording a tackle for loss, sack, or turnover until Kemp sacked Graham Mertz in the third quarter. Wisconsin went through the defense like a hot knife through butter.

If you don't believe - though I know you do - I'll end with this:

So there you have it. Wisconsin had a fullback and two wide receivers rush for more yards than Michigan's 5-star running back.