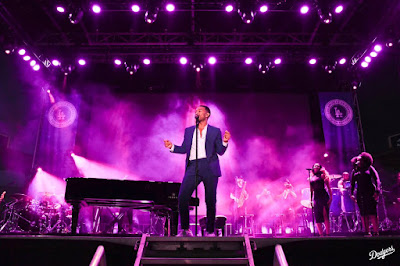 The Dodgers held their fourth annual Los Angeles Dodgers Foundation Blue Diamond Gala at Dodger Stadium last night, and by all accounts fun was had by all. John Legend provided the entertainment

Photos above via @Dodgers on twitter. You can check out even more pics by using the hashtag #LADFGala on twitter. Below are more links to check out:

“The two things I look at with a guy who first comes up is how often he gets foul balls or swings and misses, and whether or not he stays in the strike zone, meaning: Is he just going to hand you a walk? Is he going to hand you a base?” Reds first baseman Joey Votto said. “He doesn’t seem to have that, and he does seem to be getting a lot of swings and misses and foul balls. That’s a really good start.”