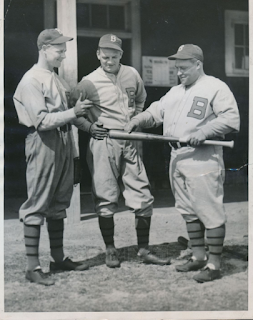 Here are three Hall of Famers - all of which are joining the Dodgers for the first time - hanging out in Clearwater, FL during Spring Training, circa 1932. This pic recently sold at RMY Auction at $169. (auction link) Per the descriptor on the reverse:

Waite Hoyt, former star of the New York Yankees and who rounded out last season as a member of the Philadelphia Athletics, with Hack Wilson, heavy slugger of the National League who served last season with the Chicago Cubs, demonstrating to Max Carey, new pilot (manager) of the "Robins," how they expect to contribute to a large extent with their batting and pitching in bringing the National League Pennant to Brooklyn this season. The boys are rather modest and had nothing to say as to how they expect to fare in the World Series. But the pennant and the World's Series are both far off for the boys are just about shaking off the winter kinks at the Robins Spring Training camp at Clearwater, FLA.

Unfortunately, the addition of these three greats did little to change the Dodgers fortunes. They finished the season in third place -- nine games behind the Cubs. Below are more links to check out:

Instead of going to San Diego, which has a large Japanese presence in its front office, Ohtani chose the Los Angeles Angels.

"It was a disappointment. I didn't imagine (him picking the Angels)," Saito told Kyodo News at the baseball winter meetings in Florida. "But it was his choice. We have to focus on our next opportunity."

Ohtani is news not only because he is the first player to both bat and pitch in Japan at an elite level but because he aims to do both in the majors -- something no one has done since Babe Ruth in 1918.

"He's actually aspiring to do both," Saito said. "They're going to let him try it, and then it's up to him. He did it in Japan, but that was Japan. In America it's going to be harder."