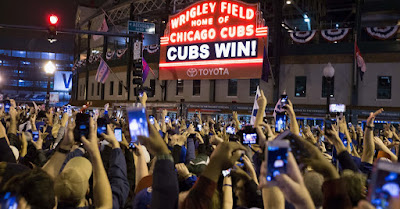 I truly didn't believed I'd ever see this happen.  And now I must find all of those Cubs fans I've teased over the years and five them a high-five.

Photo above via AM570 on twitter.  Below are more links to check out:

"He's got good stuff, he's got good offspeed, but he actually hung me a changeup," Bellinger said. "I tried to go with the pitch, not get too big. I tried to put a good swing on it and got it to the fence right there."

Gomes described his job as being on the “conceptual side.” He doesn’t suit up and supervise bullpen sessions. But the duties, he described, cover a wide spectrum. He helps prospects with getting information on how pitches work, on how to sequence their pitches. He might devise precisely what a pitcher should do with his off-day throwing, his offseason throwing. He lets a pitcher know what he needs to improve on, how his stuff compares to other pitchers, the most effective way to improve arm strength and arm durability.

Gomes spends considerable time looking at data and video. Simply put, his job is to identify the many ways a pitcher can get better.