Friends, neighbors, coworkers, family members, and even some of the strangers you saw every day in your commute to work but never even stopped to learn their name.

Of course, people dying isn’t exactly news. People in all of those groups have died all the time, and all of us eventually will die. It’s one of the facts of life that everyone has to cope with, in our own way.

Unfortunately, because of COVID-19, a lot more of our loved ones have died, often much younger than any of us could have expected.

Scarcely anyone has been unaffected by the pandemic. Even the Furry fandom has experienced loss because of this.

I didn't know him personally, but finding out a fellow member of our community passed away recently really hit me. I don't really know what to say, so I made a little something in his memory.

RIP @NarkaZirkus, I bet you were one hell of a guy.

The news was first broken by @EMTShibe, whose account was deleted.

If everyone that lives will one day die, then what truly matters is not death itself (since that’s universal and inevitable), but rather what you do with the life you have. Life is for the living. We’ve heard it all before, right?

Sometimes, it’s not easy to make sense of what’s even worth doing anymore; especially when someone you care about is gone from your life.

I’ve experienced a lot of people close to me dying over the years. It never gets any easier.

Over time, I noticed something that I haven’t seen articulated elsewhere. Maybe it’s one of those “some things are better left unsaid” scenarios and I’ve just somehow missed the cues?

A few years ago, a well-known and well-liked fursuiter named Lemonade Coyote died in a car accident while on duty for the Indianapolis EMS.

On this day of February 16th, 2013, Lemonade Coyote had passed away in a car accident.
Last year, i made this vid dedicated to him, so that everyfur can watch this vid, and remember him of what he was like. @LemonadeLivesOn #RIP #NeverForget https://t.co/zwYN9CLX15 pic.twitter.com/QI6UjUushj

This was definitely not the first time a furry has died, but his untimely passing caused a lot of people to mourn. He was one of the good ones, after all.

What I remember the most about that time was a lot of discourse about, “How should we show respect for a furry that passed away?” Questions like:

This was just a few of the topics that came up. A lot of questions, but no concrete answers.

Personally, this was the first time I realized, when a death occurs within a subculture-centric community (including, but not limited to, furries), coping isn’t straightforward, because we simply lack the same kind of customs and traditions to fall back on that mainstream culture and religion offer.

There is no well-tread path to follow. There is no comfortable narrative to recite. There is only our pain and sorrow to make sense of, and our friends to help us through it.

Too often, these hard conversations about what to do when someone we love is gone happen way too late.

Whether as a human, (or as a fuzzy animal) via screen from thousands of miles away, or grabbin' drinks together side by side, We are all with you @dogbomb1

Sometimes you know in advance that your time is nearly up.

Dogbomb–a well-known fursuiter who was featured on FurAffinity’s banner due to his volunteer work— was diagnosed with ALS in 2018. He spent the last year of his life volunteering as a test subject, and raising money with a lot of friends, to find a cure for ALS. Not so he could save his own life, but so that someone else’s could be saved in the future.

When Dogbomb elected to end his own life in April 2019, he left this world with the same dignity that he had been known for in the furry fandom for his entire life.

After Lemonade Coyote’s untimely death, an alt-right troll named Rob Shokawsky decided to make a lookalike fursuit in the likeness of Lemonade Coyote, and wear it to AnthroCon:

There is a fake Lemonade Coyote at #AC14 this was not made by us. This is an impersonation, and not okay by any means.

Proof that it was Magnus Diridian in the fake suit. He is NOT a close friend of LC and does not have permission pic.twitter.com/XsapgZQTTC

What Rob Shokawsky did here is simultaneously disgusting, immoral, insensitive, and in poor taste.

Tragically, a few years later another furry known for edgy humor and trolling would become the victim of a serial killer.

Who Mourns the Death of a Troll?

It hurts to lose someone you loved and cared for, but when someone who consistently pissed you off dies, how are you supposed to feel?

Speaking from experience, I’ve lost a lot of relatives over the years–including some I absolutely despised (for very good reason). The deaths that hurt me the most as a kid were the ones that I never got the chance to tell how much I hate them. Sometimes an unburnt bridge is doomed to rot.

Mean-spirited trolls tend to fall in the same camp, but not always.

A few years back, over the holiday break, a friend of mine died.

Jaime was a brilliant hacker and satirist who spent a lot of time in the company of hackers and trolls. Unlike most trolls, Jaime was actually funny. She was also kind of a legendary figure in the early hacker community. I knew her as someone I could chat with on IRC and Twitter, who would laugh with me and never at me, even after 6 years and a lot of emotional immaturity on my end.

Today’s Internet Trolls are fucking boring to me because I had the privilege of knowing Jaime. She was a master of the art.

Most trolls today try to break people down with negativity, and only solicit laughs through shock value and edginess. They’re more focused on the attack than on the laughter…which makes them really easy to fuck with: 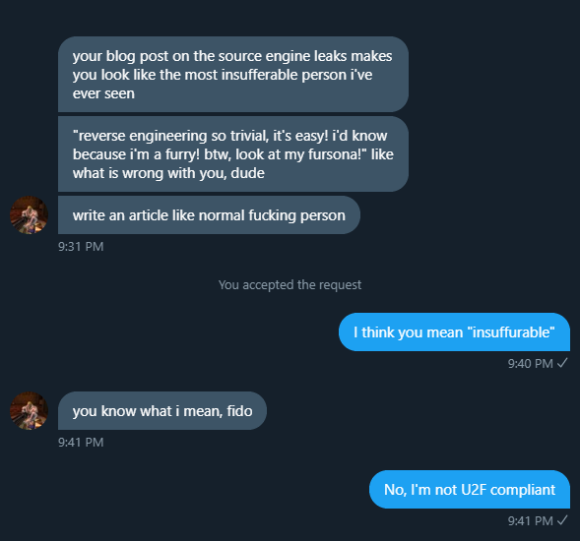 Also featured in this article.

Cultures and religions around the world have spent an often peculiar amount of time thinking and talking about death and how to cope with it. Our favorite fandoms and subcultures are not equally equipped to handle these topics.

And, like, I get it. It’s not a fun topic, especially when your fandom is your only escape from the cruel realities of life.

But at the same time, I find it difficult to say we appreciate life if we are so collectively unprepared to answer our own questions when it ends.

So let’s talk about it.

What are the rules (if any)? What are the expectations? What’s an appropriate way to mourn? How can we celebrate the lives of the people we loved? Who gets to be involved in the remembrance? (The last one is especially thorny in predominantly LGBTQIA+ communities–i.e. furry– because of toxic families and their respective queerphobia.)

I don’t know the answers, and maybe nobody will actually agree on any, but we should at least give it a serious effort. It is a matter of life and death, after all.