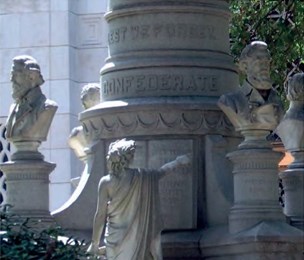 NEW ORLEANS (AP) – A judge was right when he cleared the way to remove a Confederate Monument at a north Louisiana courthouse, a federal appeals court has ruled. A local official applauded the decision but said the case probably isn’t over.

The case involves a monument erected in 1906 in a parish known as “Bloody Caddo” during the Reconstruction era.

The 5th U.S. Circuit Court of Appeals in New Orleans again rejected claims Monday from the United Daughters of the Confederacy’s Shreveport chapter.

“We definitely applaud the decision,” Caddo (KAD-oh) Parish Commissioner Steven Jackson said in a telephone interview from Shreveport. He was in the majority on the commission’s 7-to-5 removal vote in 2017.

The commission respects the Daughters of the Confederacy’s right to continue in court, he said. The chapter is considering its options and hasn’t decided its next step, attorney Dick “Dave” Knadler (NAYD-ler) said in an email.

The group could ask the full 5th Circuit for a rehearing. It could also ask the U.S. Supreme Court to hear the case.

A federal judge in Monroe threw out the lawsuit last year, ruling that the group failed to prove it had any “private property interest” in the spot where the monument stands. Judge Robert James also rejected arguments that the commission had violated the group’s rights to equal protection under law and free speech.

A 2009 U.S. Supreme Court ruling states, “placement of a permanent monument in a public park is best viewed as a form of government speech,” he noted.

A three-judge panel upheld that 20-page opinion, calling it “exhaustive and well-reasoned.” On Monday, the judges declined to reconsider.

The monument, erected in 1906, features a statue of a young soldier on a pedestal, surrounded by busts of four Confederate generals on lower pedestals. A life-sized figure of Clio, the muse of history, points to a book of remembrance that bears the words “Love’s tribute to our gallant dead.”

Jackson said the Daughters of the Confederacy seem inclined “to run the course as much as they can. That’s the judicial procedure. Sometimes it’s long for a reason. We respect that.”

The commission wants to give the group the choice of moving the monument wherever it chooses, he said.

“I don’t know that we really have a particular preference where we would like it to be moved. We just feel that it doesn’t belong in front of the courthouse,” he said.