The ex-boyfriend of Savannah Spurlock – the young mother of four who’d given birth to twins in December and vanished early Jan. 4 after she was spotted on surveillance video leaving a Lexington bar with two men — told Fox News on Wednesday he believes the men know where she is.

Signs That You’re In A Healthy Love R…
A Comparison of the Environmental Imp…
CBD 2020: What to Expect + Our Top Pr…
Giraffe running wild in Stratford Rad…
The 10 Leading Blockchain Companies o…

Police searched a home Tuesday in Garrard County, Kentucky, in relation to her disappearance. Fox 56 reported that its crew saw officers at a home at Perkins Lane and Fall Lick Road on Tuesday, and that a car was towed from the scene. WLEX reported the residence is owned by the parents of a man seen in the surveillance video.

Police remain tight-lipped in the case of the missing mother, 22, and are not confirming how the house or car might be connected. Garrard County is about an hour’s drive from Lexington.

The two men seen in the surveillance video with Spurlock have not been named or publicly identified as suspects, though Richmond police say the two men aren’t necessarily cleared. Investigators are actively talking to everyone connected to the case. No arrests have been made thus far.

“I do think the guys she was with that night know exactly where she is,” Spurlock’s ex, Shaquille Smith, 27, wrote in a message to Fox News. “I do think she is out there somewhere worried and thinking about her kids, family and friends.” 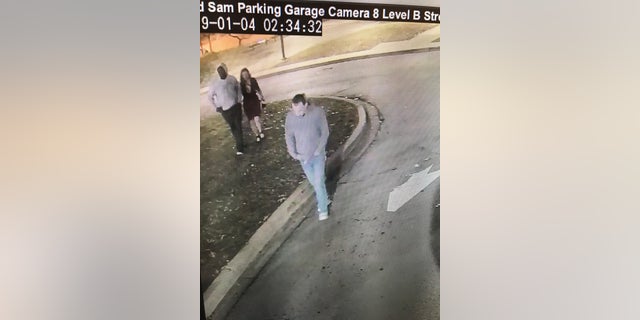 Smith says he knows the names of the men but is not releasing them to protect the investigation. He tells Fox News he does not recognize the men and considers them out-of-towners.

Savannah’s mother, Ellen Spurlock, 47, also tells Fox News she doesn’t recognize the men and says she’s devastated over the disappearance of her daughter. She has described Savannah as kind, “very responsible” and always in touch.

“I don’t sleep at night. It’s a nightmare,” Ellen Spurlock told Fox news. “I’m just trying to get information out to the public in the hopes and prayers that somebody is going to come forward that will lead to her.”

Savannah Spurlock’s oldest child has a father that is absent and often stays with his grandfather, according to her mother.

According to Ellen Spurlock, she and Savannah have lived together in a Richmond home for about one year. On the night of Thursday, Jan. 3, Savannah left their house in Ellen’s car with a female friend. The females stopped at a male friend’s house in Lexington and together the three got into a different car bound for a bar in Lexington. Ellen says Savannah’s purse and wallet were discovered in one of the cars — something that’s out of character for her.

At some point, Savannah ended up at The Other Bar in Lexington and was seen on surveillance walking with the two men around 2:30 a.m.

Ellen says around 3 a.m., Savannah FaceTimed her from the driver’s seat of a car driven by an African-American male, with two people in the back seat, to tell her she would be home in the morning. Ellen says she did not get a good look at the people in the back, who were being loud. Ellen Spurlock says she didn’t recognize the driver and can’t say definitively that he was one of the men in the surveillance video.

Ellen says she called Savannah’s phone around 8.a.m. on Jan. 4; the call went straight to voicemail, though, something that immediately caused her to worry. Ellen says Spurlock’s twins are too young to realize what’s going on – but her 2-year-old is hurting.

“He really misses her. He saw her on TV one night and yelled, ‘Mommy, Mommy,’” Ellen tells Fox News.

Ellen Spurlock and Smith say Savannah was not the type to go out often. They say she went out to bars once every couple of weeks or months.

Smith says what troubles him the most is the length of time Savannah has been missing. “I think she just wanted to go out and have a drink or two with some friends,” he said.

Savannah Spurlock is described as about five feet tall. She currently has brown hair with some blond highlights. She has tattoos, including a rose on her left shoulder. She was last seen in the surveillance video wearing a black shirt, a maroon skirt and heels.

This article was curated by Alvin F. de Levie, one of NewsWorld’s Content Curation Experts. http://feeds.foxnews.com/~r/foxnews/national/~3/tp-blSeXI3k/missing-kentucky-mom-ex-boyfriend-mother-shed-light-disappearance