This Island in South East Asia is about to Blow Up.

NOW IS THE BEST TIME TO VISIT KOH RONG

Wouldn’t it be nice to travel and always feel like you’ve found THE new destination to tell all your friends about?
For me, the most exciting part of traveling is the unknown.
It’s what new places you’ll find, what adventure’s you’ll have and what interesting new friends you’ll make. It’s the stories and scars you return home with that last, not the photos or the trinkets you bought.

A Guide To Visiting Antigua, Guatemal…
Retro PlayStation games coming to new…
Traveling is the closest thing you’ll get to being a real-life explorer.

Unfortunately, everything has already been explored, right?
I mean we already know where the most beautiful places on earth are…
We already know what cities are the most fun…
We already know which places are ‘cool’ or ‘popular’ and which are ‘too touristy’
Right??
Wrong.
Surprisingly there are still a few places in the world that have remained off the radar. These hidden gems are a travelers dream. Unfortunately, so far I’ve always gotten to the party just a wee bit late.
Some of my favorite places in the world – whilst still amazing – would have been even more amazing had I visited sooner;

…before they became the destinations that EVERYONE goes to. Because eventually, the douchebags arrive and these places just aren’t the same.
My visit to Hvar in 2016 would have been just that bit better in 2012. Koh Phangan in 2006 would have been SIIICK in 2001.  I haven’t been to Tulum in Mexico, but now EVERYONE is going to god damn Tulum. Who had even heard of Tulum 3 years ago!?
Well, finally it happened.
FINALLY, I went somewhere that is on the precipice of becoming a major destination for young explorers… 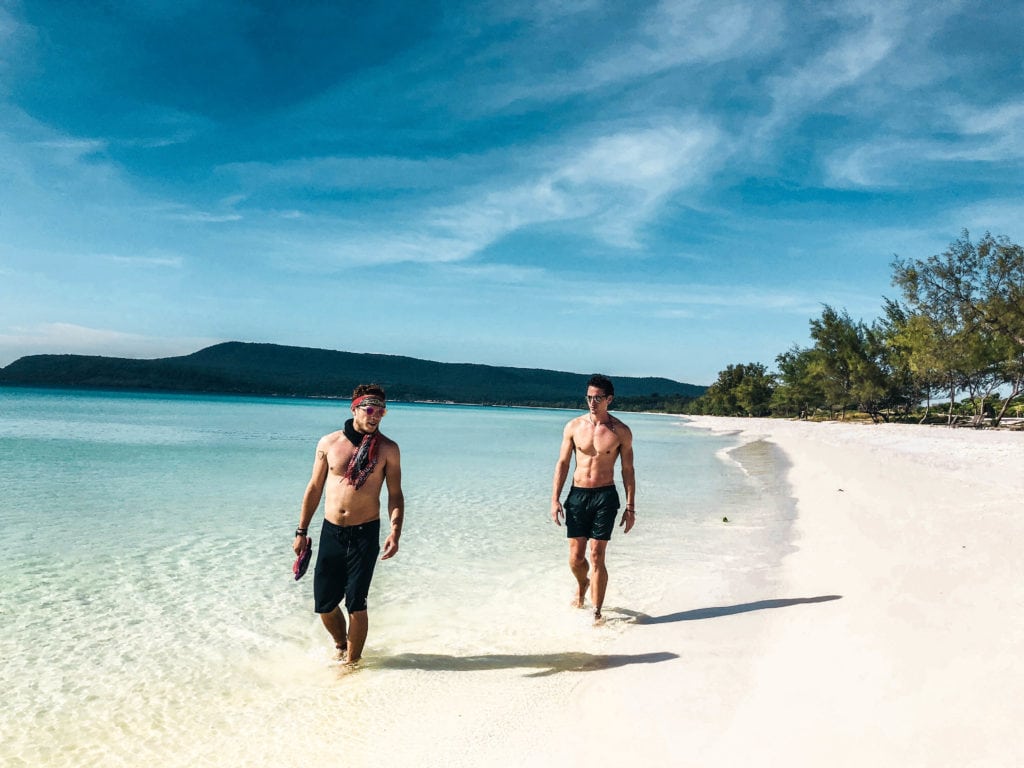 Paradise Beaches. Great Community. No Roads.
It’s hard to describe the satisfaction of knowing something that everyone else doesn’t. That is the feeling you get as soon as you step on Koh Rong.
Koh Rong is the Best Island in South East Asia. It beat our expectations in every way. It’s hard to describe why, but we all left thinking we had experienced a place that is about to BLOW UP, feeling apart of a special few who have gotten to experience this hidden paradise, whilst it’s still relatively unknown. 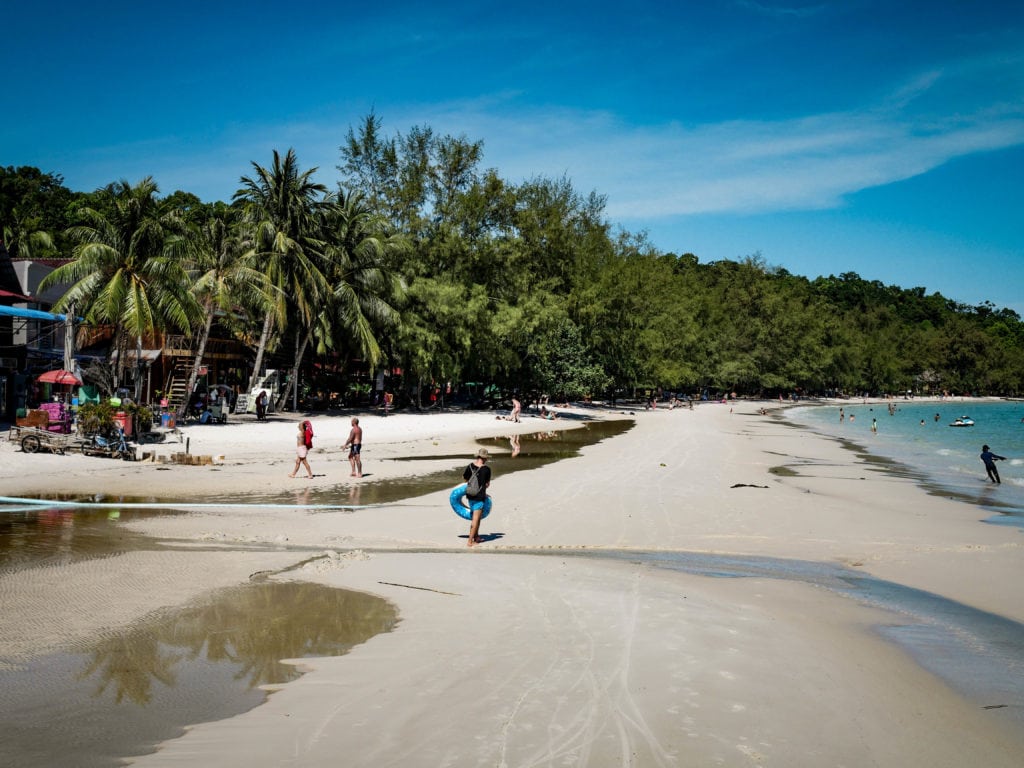 Sure, you may have already heard Koh Rong. If you are an avid travel blog reader then the name might ring a bell. I’m not trying to make out that this Island is completely unheard of or anything. There are plenty of Islands I could name that no one’s ever heard of, but these Islands will remain on the sidelines because there is nothing going on there – desert islands aren’t all they’re cracked up to be. They haven’t got all the characteristics that make a destination, the destinations. Koh Rong does most certainly does.

IT’S ALL ABOUT TIMING

Momentum in Koh Rong has clearly been building over the last few years, and that’s why now is the perfect time to go. It’s just the right amount of busy.
When I was researching the Island, everything I read had referred to it as a sleepy ‘hippie Island’. Blog posts from 2016 describe how the Island had no electricity for most of the day and you could forget about wifi. Whilst almost every description was correct in saying ‘once you visit, you won’t want to leave’, they definitely all painted a picture of an island that was only for hardcore backpackers who just wanted to completely escape, off the grid, and party in nature.
A lot has changed in just the last two years. Koh Rong Sanloem, the island next door still has the off the grid experience going for it.

I confirmed the transformation when I spoke with Adam at Adventure Adam (www.adventureadam.org), a Brit who moved to the island a couple of years ago to start his own business offering different adventure tours around the island. I asked him how New Years Eve time compared to the rest of the year in terms of busyness.
His response – “It’s always like this now”.

“It used to just get busy during certain holidays periods but now it gets busier every month.” – Adventure Adam

That’s not to say that it was overwhelmingly busy. Not at all. Koh Rong has nothing on most of Thailands Islands in terms of tourist traffic. It’s just significantly busier than what we expected and from how everyone describes it just a year or two ago.
That’s why now is the best time to visit Koh Rong. It’s going to continue to get busier and busier over the next few years, and now is your chance to be able to say you were one of the first, you went there ‘before it was cool’. Koh Rong is the Bitcoin of Islands! 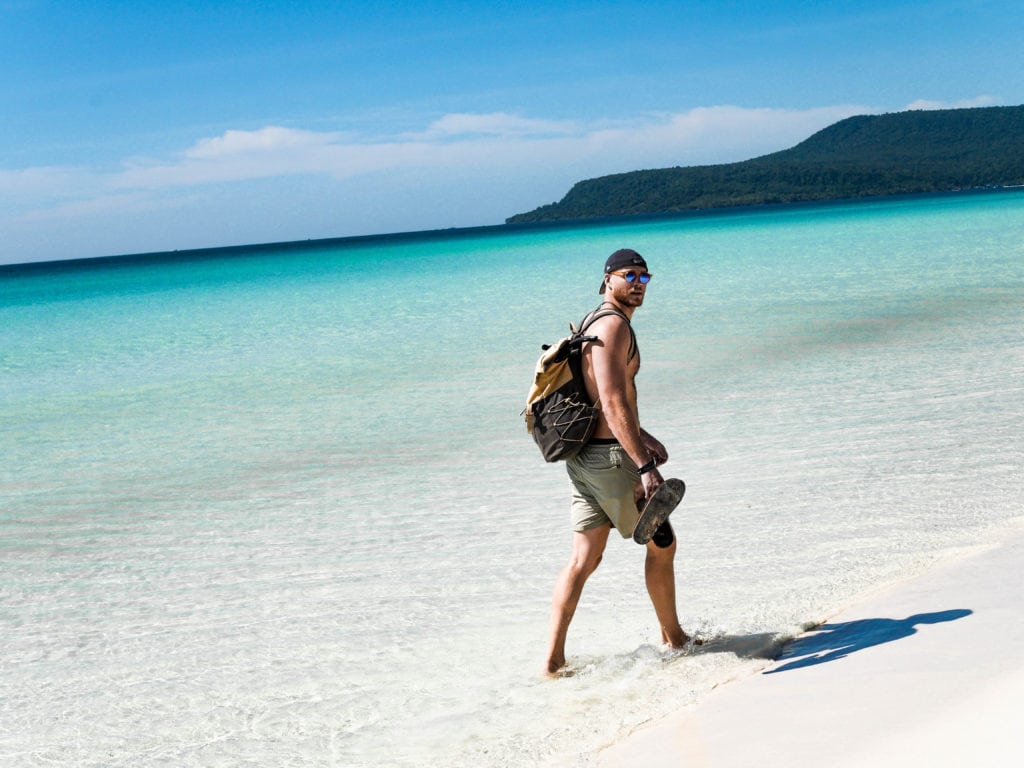 IT’S ONLY GETTING BETTER

Places that are easy to get too, usually aren’t the best places to go to. I think we can all agree that for the young, hungry, traveler major hotel chains and cookie cutter resorts are the death of any tropical paradise. Not all are bad, and some built up vacation spots are still super fun, But in general, once the big chains move in, the authenticity, the spark is lost.
Well, before they move in, they build out the infrastructure and increase the access. That is what they are doing in Koh Rong.

Long Beach, the Cambodian Island’s most beautiful beach is currently tainted by the construction of a new pier at one end. Whilst not an eyesore or anything, this pier is leading the way for more tourists and travelers to visit the Island.
Further up Long Beach is a small private pier used exclusively by the Islands brand new first Luxury Resort, owned by Royal Sands. Luckily the designers took the Islands untouched beauty into consideration and built beautiful one level bungalows that blend into the coastline. However, these $400 a night bungalows are a sign of things to come.
However, for now, all this construction is a good thing.
New business, greater accessibility, and more visitors will only improve the Island(for now), upgrading it’s infrastructure and improving the choice of activities and experiences to be had. Who knows, maybe in the next few years Koh Rong will finally get roads!
Things are looking very good for Koh Rong, I have no doubt it will become the next major destination for young adult travelers, gap year students and vacationers for years to come. Get it whilst it’s good though…
Hopefully, it will be a couple of decades before it turns into another Koh Phangan.

HOW TO GET TO KOH RONG

There is no airport on Koh Rong – come on.. did you even read this post?! There aren’t even ROADS! :). Your best option is to fly directly into Sihanoukville, a coastal town in Cambodia where all the ferries for Koh Rong depart from. You can also fly into Phom Pehn and take a 4-hour bus or taxi to Sihanoukville for about $5 and $60 respectively.

There are 5 different ferry companies that can take you to Koh Rong. Each leave from Ochheuteal (‘Serendipity’) pier in Sihanoukville. The fastest ferries take about 45 minutes. Return tickets on all of them are around $25. Tickets are available online:

This post first appeared on The Cheeky Traveler, please read the originial post: here
People also like
A Guide To Visiting Antigua, Guatemala: The Best 5 Things To Do And See
Retro PlayStation games coming to new PS Plus premium tier?

This Island in South East Asia is about to Blow Up.