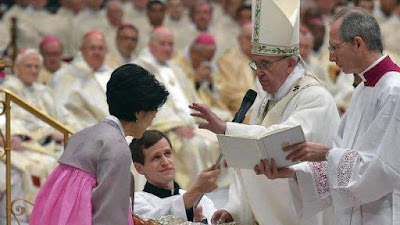 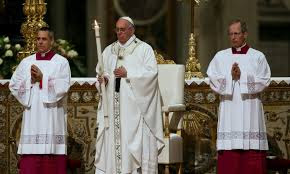 Pope Francis preached an Easter message of hope after a grim week in Europe, calling on Christians not to let fear and pessimism "imprison" them.
Speaking amid tight security at the Vatican, the Pope said: "Let us not allow darkness and fear to distract us and control our hearts."
His message followed a condemnation on Friday of the Brussels terror attacks.
Islamist violence is expected to be a prominent theme of his traditional "Urbi et Orbi" Easter message.
Many pilgrims cancelled their planned trips to Rome in the wake of the violence in Brussels, but St Peter's Basilica in the Vatican was packed when Pope Francis celebrated mass on Saturday evening.
The Pontiff entered a darkened basilica with just a single candle guiding him. As he reached the altar, the basilica's floodlights came on to symbolise the resurrection of Jesus Christ.
Delivering his homily, Francis said: "Today is the celebration of our hope. It is so necessary today."continue reading
Mass Live

Barack Obama descended on Cuba with a pomp unmatched by the Pope on Sunday, becoming the first American president to visit Cuba in nearly a century, and the first since a revolution led by Fidel Castro toppled a US-backed strongman in 1959.
As he arrived, Obama used a Cuban phrase meaning “what’s up?” when he tweeted: “¿Que bolá Cuba? Just touched down here, looking forward to meeting and hearing directly from the Cuban people.”
“This is a historic visit,” Obama said as he greeted US Embassy staff and their families at a Havana hotel. “It’s an historic opportunity to engage with the Cuban people.”A giant American delegation, estimated at somewhere between 800 and 1,200, swept into Havana this weekend, intent on closing a final chapter in cold war history and sealing the diplomatic legacy of Obama’s presidency. Joined by first lady Michelle Obama and his two daughters, Obama toured Old Havana by foot, walking gingerly on the slippery wet stones in front of the Havana Cathedral. The downpour notwithstanding, a few hundred people gathered in the square erupted in applause and shouted Obama’s name as the first family stepped forward. . continue reading

Obama Declares a New Partnership After Talks With Argintina 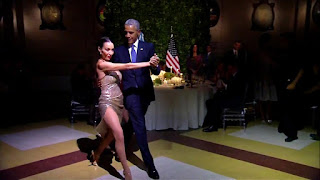 Obama says US too slow to react to Argentina's "Dirty War"

BUENOS AIRES — President Obama Thursday visited a memorial in Argentina to the thousands of people killed and disappeared during that country’s “dirty war,” on the 40th anniversary of the coup that started it.
Obama used his visit to announce his plan to declassify new military and intelligence records that document the human rights violations from 1976 to 1983.
“There’s been controversy about the policies of the United States early in those dark days,” Obama said, standing beside the Argentinian President Mauricio Macri. “The United States when it reflects on what happened here has to reflect on its own past.... When we’re slow to speak out on human rights, which was the case here.”
Despite early U.S. support for the coup, Obama said U.S. diplomats, human rights workers and reporters played an important role in documenting the abuses that took place in the aftermath. He extolled the likes of diplomat Tex Harris, who worked at the U.S. embassy in Buenos Aires during the administration of then-President Jimmy Carter to document human rights abuses and identify the disappeared. Such men did so despite threats to themselves and their families, Obama said.http://www.usatoday.com/story/news/world/2016/03/24/obama-speaks-us-role-argentinas-dirty-war/82206754/

Truth About Easter
Reprint from: Truth on Easter 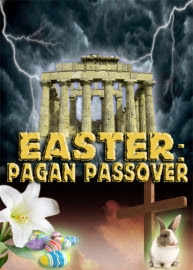 Each year in the springtime, the mainstream Christian world celebrates a holiday called "Easter." Many assume that this holiday originated with the resurrection of Jesus Christ but as the information provided here will demonstrate that this spring tradition of men is actually or an older and far less 'holy' than one would imagine. The following quotes have been derived from several valid and even scholarly sources. The purpose is to unveil the truth about the origins of this spring 'Christianized' pagan holiday. When you have read these though and discerned the truth it is our hope that you will remain convicted and follow His lead - away from non-biblical holidays. The crux of the matter is not so much the hidden meanings of the symbols and story but one of how your heart is before your Creator. Do you decide what days to observe or does God? The bible tells us that a little leaven leavens the whole lump and with that seasonally-correct truth in mind ... Come, let us reason together.
The Origin and History of Easter
"The term 'Easter' is not of Christian origin. It is another form of Astarte, one of the titles of the Chaldean goddess, the queen of heaven. The festival of Pasch [Passover and the Feast of Unleavens] was a continuation of the Jewish [that is, God's] feast....from this Pasch the pagan festival of 'Easter' was quite distinct and was introduced into the apostate Western religion, as part of the attempt to adapt pagan festivals to Christianity." (W.E. Vine, Merrill F. Unger, William White, Jr., Vine's Complete Expository Dictionary of Old and New Testament Words, article: Easter, p.192)
Ish·tar : Mythology The chief Babylonian and Assyrian goddess, associated with love, fertility, and war, being the counterpart to the Phoenician Astarte. (The American Heritage® Dictionary of the English Language: Fourth Edition. 2000)
Tammuz: ancient nature deity worshiped in Babylonia. A god of agriculture and flocks, he personified the creative powers of spring. He was loved by the fertility goddess Ishtar, who, according to one legend, was so grief-stricken at his death that she contrived to enter the underworld to get him back. According to another legend, she killed him and later restored him to life. These legends and his festival, commemorating the yearly death and rebirth of vegetation, corresponded to the festivals of the Phoenician and Greek Adonis and of the Phrygian Attis. The Sumerian name of Tammuz was Dumuzi. In the Bible his disappearance is mourned by the women of Jerusalem (Ezek. 8.14).(The Columbia Encyclopedia, Sixth Edition. 2001)
"There is no warrant in Scripture for the observance of Christmas and Easter as holydays, rather the contrary...and such observance is contrary to the principles of the Reformed faith, conducive to will-worship, and not in harmony with the simplicity of the Gospel of Jesus Christ. " (Morton H. Smith, How is the Gold Become Dim, Jackson, Mississippi: Steering Committee for a Continuing Presbyterian Church, etc., 1973, p.98)
"EASTER (AV Acts 12:4), An anachronistic mistranslation of the Gk. pascha (RSV, NEB, "Passover"), in which the AV followed such earlier versions as Tyndale and Coverdale. The Acts passage refers to the seven-day Passover festival (including the Feast of Unleavened Bread). It is reasonably certain that the NT contains no reference to a yearly celebration of the resurrection of Christ." (International Standard Bible Encyclopaedia, edited by Geoffrey Bromiley, Vol 2 of 4, p.6, article: Easter)
"The term Easter was derived from the Anglo-Saxon 'Eostre,' the name of the goddess of spring. In her honor sacrifices were offered at the time of the vernal equinox. By the 8th cent. the term came to be applied to the anniversary of Christ's resurrection." (International Standard Bible Encyclopaedia, edited by Geoffrey Bromiley, Vol 2 of 4, p.6, article: Easter) 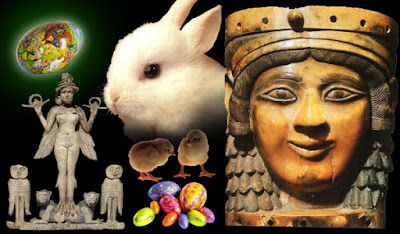 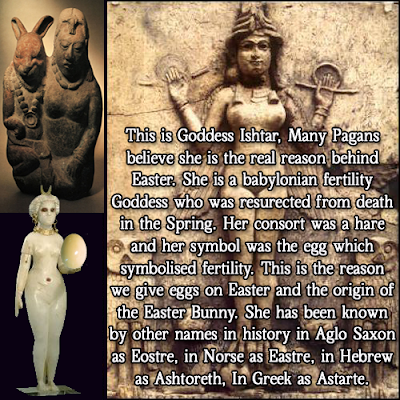 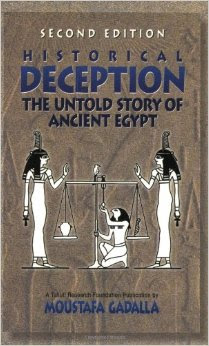 href="http://www.iconspedia.com/icon/reddit-logo-4367.html" style="color: #105cb6; text-decoration: underline;">
Roman Church Create Christianity and Jesus? Caesarsmessiah
Who was Jesus?
Why is there no historic archaeological evidence of his existence?

Who wrote the Gospels?
Why were they written in Greek, rather than Hebrew or Aramaic?

How did the Christian religion come to be centered in Rome? Why were the
first Christian pope and earliest saints all members of the Flavius Caesar
ruling family?

ISIS - Caliphate Lost But Not Defeated