‘I Made A Deal With God’: Nigerian Christian Girl Details Harrowing Escape From Boko Haram A Nigerian Christian who survived a kidnapping orchestrated by the terrorist group Boko Haram has credited her escape to a deal she made with God. 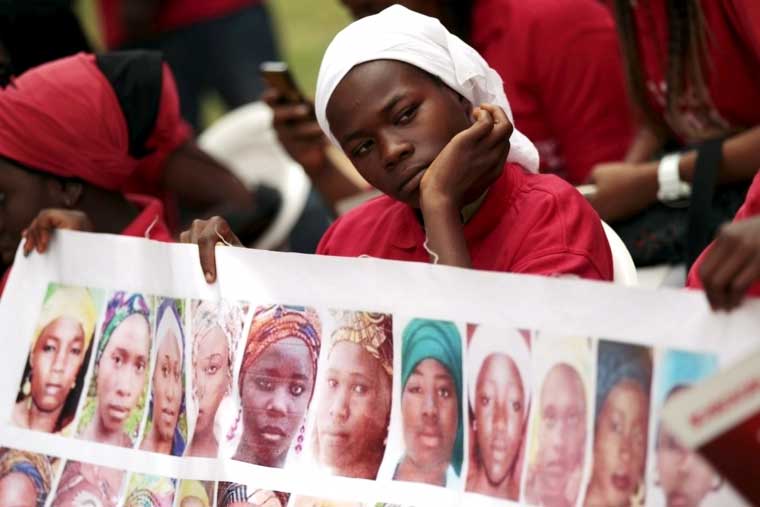 Bring Back Our Girls campaigners look on during a protest procession marking the 500th day since the abduction of girls in Chibok, along a road in Abuja August 27, 2015. The Islamist militant group Boko Haram kidnapped some 270 girls and women from a school in Chibok a year ago. More than 50 eventually escaped, but at least 200 remain in captivity, along with scores of other girls kidnapped before the Chibok girls. | Reuters/Afolabi Sotunde

Joy Bishara, one of the 276 Nigerian girls who was kidnapped from their school in Chibok on April 14, 2014, spoke at International Christian Concern’s press conference announcing the 2021 Persecutor of the Year Awards Tuesday. She shared the story of her kidnapping and escape with the group of religious freedom advocates gathered at a Capitol Hill hotel where the top three persecutors of 2021 were named and included the country of Nigeria.

“We were all sleeping and my friend woke me up,” she recalled. “I looked at her and I went back to sleep. But she touched me and woke me up a second time so I listened and the ground was shaking and I can hear gunshots outside of the gate. Mind you, you have to walk about six minutes to get to our dormitory where we are sleeping from the campus area and that’s where the gate was.”

Joy Bishara
Joy Bishara, a Nigerian Christian who was kidnapped by Boko Haram in 2014, discusses her abduction and escape at International Christian Concern’s 2021 Persecutor of the Year Awards on Nov. 16, 2021. | The Christian Post
As “the floor was just shaking and everywhere was just scary,” Bishara asked her friend what was going on. Bishara’s friend informed her that “the Boko Haram terrorist people are here.”

“The first thing I thought of is how my brothers and my mom will get to safety,” she said. “Usually, whenever Boko Haram people are attacking a village, people just leave their homes and go to spend the night in the bushes until morning when they can clearly see everything, then they come back to their houses.”

Bishara said that as she and her friend “were praying for God’s protection on our family,” “one man came in dressed in a soldier uniform.” While she didn’t realize it at first, Bishara eventually discovered that Boko Haram terrorists “usually take the forms of soldiers because soldiers are known to protect people and that’s how they deceive us to stay in one place.”

The man dressed as a soldier instructed Bishara and the other girls to wake up the girls who were still sleeping. When all of the girls were gathered in one place, the group of Boko Haram terrorists “started barging in, some of them climbing the walls, some of them … pushing through the gate and they came in and that was when we realized they were not the soldiers … like they claimed because, at that time, some of them were not dressed as soldiers and soldiers usually all look the same.”

“They started shooting on top of us and scaring us and saying they would kill us and nobody would do anything about it,” she added. Bishara lamented that “sadly, that is true” because “nobody ever does anything about it.”

After the terrorists ransacked the girls’ food supply, “They set fire to every building, every empty class, everywhere is on fire and they asked us to come out of our dormitory and while we were walking, the fires and flames were just everywhere.”

The terrorists asked girls to sit under a tree and one of them told them they “should all kneel down and say our last prayers.” While Bishara thought “they were going to kill us for real,” the terrorists ultimately did not kill the girls at that moment.

Instead, they brought three different trucks and told the girls “Whoever wants to live should get into the truck.” Deciding she wanted to live, Bishara jumped into one of the trucks. As “the trucks started speeding farther away,” Bishara “made a deal with God.”

She asked God to “please allow me to see my family once more and I promise to follow you for the rest of my life.” According to Bishara, “He came through five minutes later because one of their cars was not moving so they decided to go fix it because we were [too] far from town for them to go back and steal another car.”

The car malfunction kept the terrorists occupied, thereby giving Bishara an opportunity to escape that did not come without risks: “While I was in the truck, I heard a voice say ‘jump’ and then I looked down and it was scary of course.”

“So it was just all scary and I was deciding should I jump, should I not and a voice in my head is battling with another voice saying, ‘If you jump, you’re going to die.’ And the other one is saying, ‘Jump,’ so I had to decide should I jump or should I not? I ended up coming to a conclusion that even if I jump and then I get injured or die, at least my parents will find me here or my corpse and bury me knowing I am dead, rather than to go with these people and never be seen ever again.”

Bishara believed that her mom “would not be OK knowing … thinking about me, if I am OK every single day, that would be a torture for her, so I decided to jump and die.” And so she jumped from the truck.

“So when I jumped out and I fell on my belly, realizing I was still breathing, I got up and started sprinting … and I ran for the rest of the night,” she said. Upon arriving in a village, Bishara ran into two other girls from the school she attended in Chibok who had also jumped out of the truck. They all asked for assistance from a farmer, who took them back to Chibok. 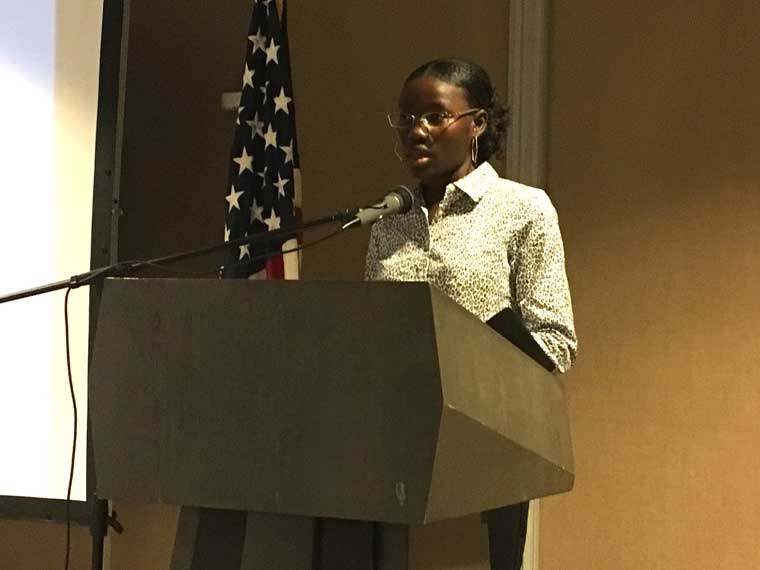 Joy Bishara, a Nigerian Christian who was kidnapped by Boko Haram in 2014, discusses her abduction and escape at International Christian Concern’s 2021 Persecutor of the Year Awards on Nov. 16, 2021. | The Christian Post

Bishara’s speech followed ICC’s designation of Nigeria as one of three Persecutors of the Year. The religious freedom advocacy group cited Nigeria’s lack of action to address the deaths of tens of thousands of Christians, the displacement of millions of additional Christians and the government’s failure to persecute the perpetrators of attacks against Christians as the justification for labeling Nigeria a Persecutor of the Year.

Bishara arrived in the United States shortly after escaping from Boko Haram. As noted by Newsweek, Bishara graduated from Canyonville Christian Academy in Oregon and went on to attend Southeastern University in Florida. Additionally, she met with then-President Donald Trump at the White House in 2017, around the same time the State Department released its annual report documenting human trafficking worldwide.

The post ‘I Made A Deal With God’: Nigerian Christian Girl Details Harrowing Escape From Boko Haram appeared first on Believers Portal.

‘I Made A Deal With God’: Nigerian Christian Girl Details Harrowing Escape From Boko Haram