Some of my American readers might be familiar with Dutch Sheets.

Sheets has his own ministry and is working towards ‘awakening’, which, along with ‘restoring’ and ‘reclaiming’, is a term Ted Cruz often used during his rallies in primary season.

It is a dog whistle for theocracy and Dominionism — Christians taking over the government.

Therefore, it is with reservation that I am summarising and excerpting Dutch Sheets’s reasons why he is voting for Donald Trump. He makes it clear that these are his personal views, not those of Dutch Sheets Ministries.

Much of his essay of October 21 resonated strongly with me, and I hope it does with you as well. Please take the time to read it in full and pass it along to conservative Christian friends and family.

First, he has strong reservations about Trump with regard to personality and past deeds which have diminished during the post-convention campaign season.

That said, Sheets and I agree that both of us know what we are voting against.

This is why I am posting so many anti-Hillary pieces in order to reveal the extant evil in the Democratic Party. I am doing this because Big Media will not. They want Americans — especially the uninformed — to think that everything is sweetness and light.

this election is not nearly as much about who I am for, as it is who and what I am against; and frankly, even with my initial concerns, the decision has never been easier.

He strongly objects to Obama and his administration:

One of the most devastating occurrences in America in our lifetimes, ranking up with The Supreme Court’s decisions of Roe vs. Wade and Engel vs. Vitale (the removal of prayer from schools), was the election of Barack Obama. I gave a strong warning about what would happen to our nation if he was elected. Sadly, it has all come to pass: a continued liberalization and empowerment of the judicial system in America; a weakened economy (our national debt has doubled in 7 years to $19 TRILLION!)[1]; further moral deterioration, along with a rebellion to and mockery of God (does anyone remember the White House lit up in the colors of the LGBT movement after marriage was re-defined by the Supreme Court?

If that wasn’t an “in your face” to God and those of us who “cling to their God, guns and religion” by the man who mockingly said it, I don’t know what could ever be!); increased violence; a weakened position in the world, along with a weakened military; the advance of radical Islamist terrorism; a setback in race relations; and more. I rejoice that our nation has been able to elect our first black president. I am deeply saddened, however, that it was Barack Obama.

I could not agree more.

Hillary is pro-abortion, including partial-birth abortion, the most insidious evil of the last century; will raise taxes while continuing out-of-control spending; will further weaken our military; is for completely open borders[2]; is pro-gay marriage; supports Obamacare; has no respect for our Judeo-Christian heritage; sells influence; and is a proven liar. Do not be fooled—she will completely finish what Obama started.

He goes on to say that the effect will be nearly irreversible. If anything can be undone from 12 years of Democrats at the top, it will take decades.

He recognises that another Clinton White House is not just ‘four more years’ and makes this appeal to ‘conscience’ and stay-at-home voters:

I also want to make an appeal to those who say their conscience won’t allow them to vote for either Trump or Clinton, so they simply won’t vote at all. I sincerely respect your convictions, but in this election, that argument fails the logic test (as does voting for someone who cannot possibly win). Trump’s potential negative developments do not come close to the magnitude of those Hillary would produce.

We simply cannot—regardless of our concerns regarding Trump—allow all the above-mentioned consequences to happen. I respectfully appeal to you to turn your “conscience” and “principles” toward the unborn, your children, grandchildren, and the destiny of this nation.

Sheets believes Trump has repented over the past decade and offers this evidence:

To see how Trump would actually lead, I would challenge you to look at those with whom he has surrounded himself: Pence; Carson; Huckabee; Giuliani; Christie; Gingrich; Palin; trusted generals; law enforcement officials; border patrol officials; evangelical leaders of all races; and otherwise, ethical, conservative leaders. What does this tell us? It is probably the greatest indicator of who Trump now is, clearly making the case that he has changed his moral ways over the past 10 years, as he claims.

I personally believe he has changed. I also believe God has gripped his heart for the nation, and is in the process of further transforming Mr. Trump. God has certainly allowed him to be humbled. Of course, the statements made by Trump on the video released from 2005 were despicable. However, if we reject him because of the sins of his past, we would also have to reject Abraham, King David, Rahab, “the woman at the well”, Mary Magdalene—all adulterers in their unrighteous past. And don’t forget murderers like the Apostle Paul. A lot of formerly despicable people will be in Heaven! And a lot of them, by the way, became great leaders and champions for God. Some changed the world.

These associations also tell us that Trump’s stated conservative bent is genuine, and they state that he is wise enough to know what he doesn’t know! I believe Trump is showing us that he will function, if elected president, as any wise businessperson does: find qualified people who know how to get the job done, as in the above examples, and empower them to do it. I like those whom he is signaling to us would be those leaders. They are proven, trustworthy and honorable. If you cannot vote for Trump, vote for them.

Sheets goes on to say that voting against something or someone is a valid reason to vote. He then lists around 20 policies and groups to vote against. All are valid, including these:

• Vote against the unethical, biased, lying and untrustworthy media. (We will never reclaim America until we reject their influence. They may be the single greatest obstacle to America’s recovery.)

• Vote against the silencing of the Church. (Only the totally naive do not see this coming quickly.)

• Vote against revising our history and the loss of our Judeo-Christian heritage.

• Vote against the politicization and exploitation of racism, and the polarizing of America.

He has a special message for pastors, which I share 100%.

Pastors, if you’ve ever made a stand, make one now—it may be your last chance. Tell your people the truth…clearly. Pray and fast!

I am truly annoyed to see a third election cycle when practically NO conservative clergy are speaking up about the great danger America faces in a few months’ time if Hillary Clinton is elected president. There are many retired pastors and former military chaplains whose websites have incredible followings. They should be saying something to their readers!

Instead, they treat this year as if nothing is happening and carry on with the same old stuff, some of which really is ‘stuff’ — i.e. of little importance to potential converts — which they have been going on about for years.

Sheets closes with a message for Christians:

To all Believers, if you agree with what I have written, forward it to all of your friends and family members. Most of them hear only from a hypocritical, lying media, which is now the propaganda arm of the liberal agenda. Speak up. Appeal to them to read this and think about it.

Vote for a future, one that includes what you love and believe in. Trump has flaws, but Hillary will be fatal.

You can bet your boots that Hillary is fatal.

Trump is the only logical choice for president.

Read, reflect, pray and vote. America’s future depends on it.

I don’t remember where I got the following graphic, but it does reflect what ‘conscience’ voters are thinking: 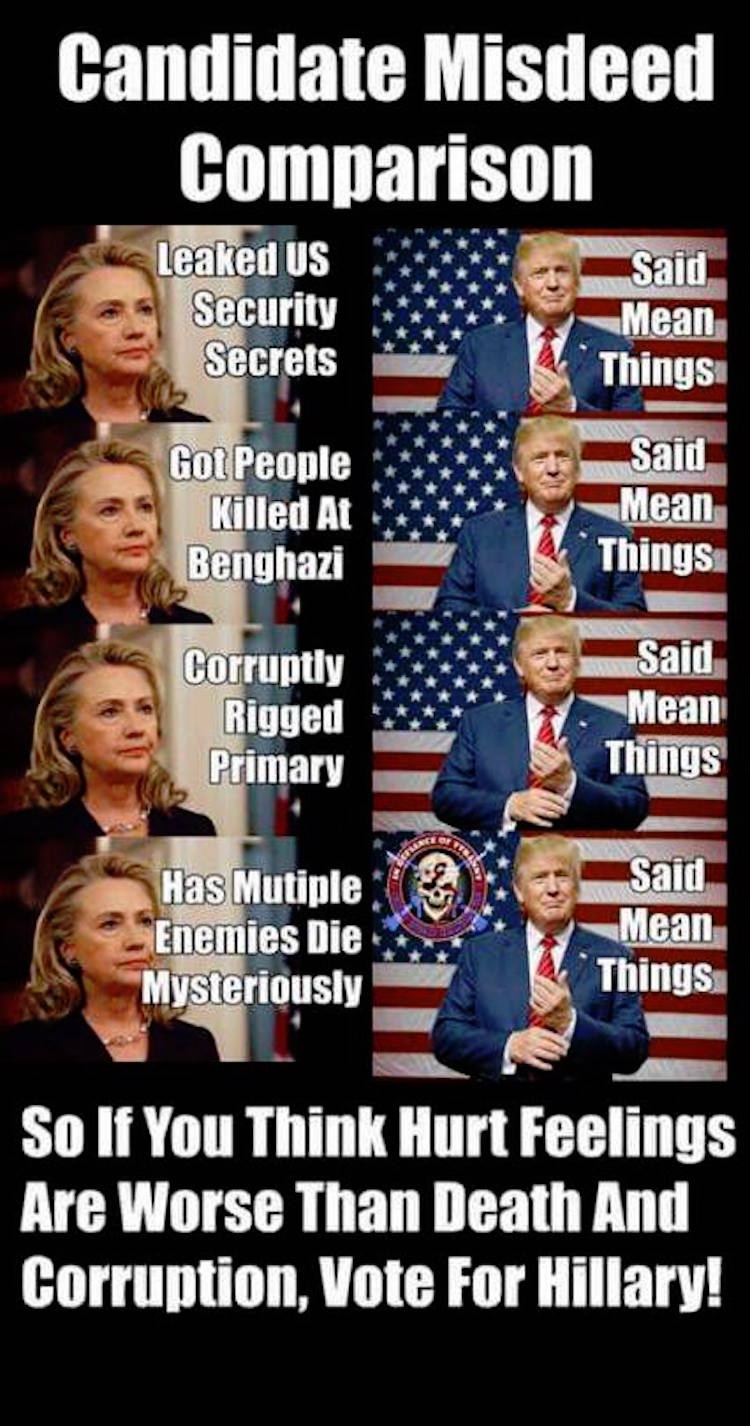