Seek God: A Sermon for the First Sunday of Advent at St. Barnabas 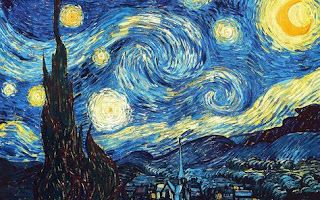 As I was prepping for my sermon this past Sunday, I read in a commentary that Vincent VanGogh's famous painting "The Starry Night" was inspired by the scripture reading from Luke, which depicts chaos in the skies and the seas as the Son of Man is coming.

Martha Millan Interview: Fiona’s secr…
Shen Men Piercing: Does it work for A…
What to wear: outfit ideas for Christ…
painful sex during pregnancy - lovelc…
Inside 'Crypto Castle': The World's F…
I also knew that as I was reading both Jeremiah and the pericope chosen from Luke 21, I couldn't stop thinking about the trial in Brunswick, Georgia, and the conviction of Greg and Travis McMichael and William "Roddie" Bryan for the murder of a black jogger, Ahmaud Arbery. So many people expressed shock (and relief!) that an almost all-white South Georgia jury found three white men, one of whom (Greg McMichael) had a connection to the local Brunswick District Attorney, guilty of murder. I wasn't shocked; I thought the evidence was pretty overwhelming. I was relieved because well...I have thought the evidence pretty overwhelming in other cases where the killing seemed racially-motivated and yet the people were not charged or convicted. Certainly, the lack of a conviction in Wisconsin in the case of Kyle Rittenhouse made some more anxious about what was to happen in Georgia.
And the Georgia trial had all the theater that I know some in the South really don't like. There were demonstrations outside the courthouse, including one day when the New Black Panther Party marched with guns. The judge in the case made sure the jury was secluded from what was happening outside the courthouse.
What didn't get as much attention was the clergy group that had formed in the wake of the murder. That interfaith group kept up a vigil of prayer every morning for all parties involved, the lawyers, the judge and the jurors. Prayer isn't as striking an image for the TV cameras as armed people, especially armed black people. But I would like to believe that the presence of those clergy people had a small yet significant impact on keeping the peace in moments of disquiet and difficulty.
There is no better time for God's presence to be known than in those times!
+++

Good morning! And welcome to Advent…that season of preparation, anticipation, and not anything our culture understands or appreciates.

I’m sure y’all noticed the red and green decorations in the stores…even before all the Halloween candy was sold out. Even driving in this morning…I saw the large Christmas ball decorations on the street corners.

While big box stores have been pushing Christmas for weeks…we come to church and are greeted with the words of Luke’s Gospel:

"There will be signs in the sun, the moon, and the stars, and on the earth distress among nations confused by the roaring of the sea and the waves. People will faint from fear and foreboding of what is coming upon the world, for the powers of the heavens will be shaken….”(Luke 21:25-26)

The Luke reading may sound a bit grim…and in so many ways…that seems exactly right for this season of Advent…and especially for our times right now.

All eyes of the nation had been focused on the trial in Brunswick for the past month.

And while the jury handed down guilty verdicts in that case…

One family has had a son murdered…

Two other families are living with the punishment that their loved ones committed a murder.

And a community must now work to reckon with what has happened and heal from the event.

I think the bishops here in Georgia…our bishop Logue and the Bishop of Atlanta as well as the Lutheran bishop of the Southeastern Synod got it right when they called for us to pray for all affected, including ourselves…as we continue to do the work we have been given to do to reckon with the sin of racism and to strive toward a world where all God’s beloved children are treated with respect and dignity.

I had honestly and maybe naively hoped that the pandemic with shutdowns and lockdowns and dependance on those we called “essential workers”…which included people working in grocery stores and restaurants…that maybe our hearts would have softened enough to see how we are… as people… so interconnected and interdependent.

Perhaps we might begin to see Christ in the face of the person we regard as “other.”

Time and time again…I’ve been disappointed and disillusioned that our forced social distancing has seemed to separate us even more.

As one of my friends once said, “We are a long way from the manger in Bethlehem.”

Again…I say…welcome to Advent….a time when we are encouraged to slow down…take stock of the messiness that is our reality at times…and to keep searching for that light in the distance as we look for Christ’s return.

If there’s someone who understands “messy” and has words that still remain so incredibly relevant it’s the prophet Jeremiah.

Something to know about Jeremiah:

he’s the prophet for people who have been through trauma. And this poor guy has seen A LOT of trauma.

He’s the prophet of those residents of the southern kingdom…Judah… who thought they had it all figured out. The Assyrians had conquered them…but they were going to eventually overthrow their aggressors.

Instead…they were defeated, captured and scattered in the Babylonian exile. Jerusalem was piles of rubble and only a small remnant remained…one of those being Jeremiah.

Now he’d tried to warn the leaders of Judah of these enemy invasions.

But instead of thanking him and heeding the warnings…Jeremiah was beaten and ridiculed.

So here he is…in this city still smoking and smoldering from the Babylonian takeover… and yet Jeremiah is proclaiming hope.

The hope is not going to come right away…but “the days are surely coming.”

There is a righteous branch that will spring up for David (Jer.33:15b). The conquered kingdom of Judah will be restored…and the ransacked city of Jerusalem will be safe…and will be called “The Lord is our righteousness.” (Jer.33:16).

These days haven’t arrived yet.

But Jeremiah knows this is coming.

He has such an intimate and close relationship to God (at the beginning of the Book of Jeremiah…we hear God say that he knew Jeremiah in the womb) and Jeremiah knows in the depths of his soul that God is going to deliver this frightened and shaken people.

Those days are surely coming…so don’t give up.

How much do we need to have the prophet now in our time…during these past almost two years…to keep our hearts and minds fixed on a future beyond pandemics?

Interestingly…the symbol of the righteous branch…new life growing… fits with the hope that follows the “roaring sea” and “fainting in fear” language of Luke’s Gospel.

Jesus uses the fig tree to reminds us that even when things might be feeling out-of-sorts…there is hope…like when the leaves of the fig tree start sprouting, we know cold and winter will give way to warmth and summer.

This is Jesus giving us a type of pep talk in the same way that Jeremiah was giving reassurance to his beleaguered people.

Where this particular passage comes in Luke’s Gospel is right before everything starts unraveling in Jerusalem and Jesus is arrested.

So he’s speaking these words in a time where he knows that he’s in danger.

But even in this moment of uncertainty…Jesus isn’t saying to throw in the towel.

He’s saying, “Don’t let the worries of this life get you down!

Keep your head up!

Don’t just stare into the void, but see what is happening around you, and know that hope is springing up…just like that righteous branch.”

How much do we need to hear that message from Jesus now?!

And it is coming into fruition.

I see it in the response of clergy in Brunswick who came together to serve as the non-anxious presence of prayer for the length of that murder trial.

All five of the Episcopal Churches in the Glynn County area…as well as Baptists, Methodists, Jews and Muslims…made a point of being outside the courthouse. They all agreed to work together because they knew how deeply shaken the community had been by what happened.

And like Jeremiah…and like Jesus…they also knew that their best offering back to the community was to acknowledge that while the times are hard…there is still a God who has not forsaken South Georgia and empowers them and us to seek the Holy that is present in all people…loving our neighbors as ourselves.

They kept a daily vigil each morning to pray for the judge, the jury and the families.

They looked to God…and served as a visible sign of God for a hurting and troubled community.

Not only did this help serve as a balm to the wounds of Brunswick…it has opened channels of communication and dialogue among the people of faith in Glynn County.

I pray that the good work they’ve begun continues…and might even be an inspiration for us here in Lowndes County.

What an amazing thing it would be if our three Episcopal Churches might find a common mission to make life better for all people.

What a positive affect we could have if the Episcopal Churches joined with other faith leaders to be a force of love and lowering the temperature on the anger that seems to be fueling division in the world?

What an outward and visible sign of God’s grace and love when the Episcopal Churches and all people of faith come together in unity of purpose to seek God!

Those days are surely coming, says the Lord…

In the Name of our Undivided Trinity…Father, Son, and Holy Spirit…

Seek God: A Sermon for the First Sunday of Advent at St. Barnabas