I had often thought of writing a post about my Notre Dame visit, and had been reluctant previously largely because my photographs are few and unexceptional. This post is my way of expressing my sadness about the recent fire at the church, expressing my hope that they are able to rebuild, and being thankful that I did get to experience it first hand.

When I had the opportunity to do a layover in Paris in 2009 (Oh how the time flies), I was far from being a "Church Crawler," and my grasp of photography was even worse than it currently is, so unfortunately I was not mindful to take great photos. It was my opportunity for a quick experience in Paris, I only had several hours, and I certainly rushed through major sites with as much gusto as I could foster up after doing more than a week's worth of 12+ hour days of work in a neighboring country. 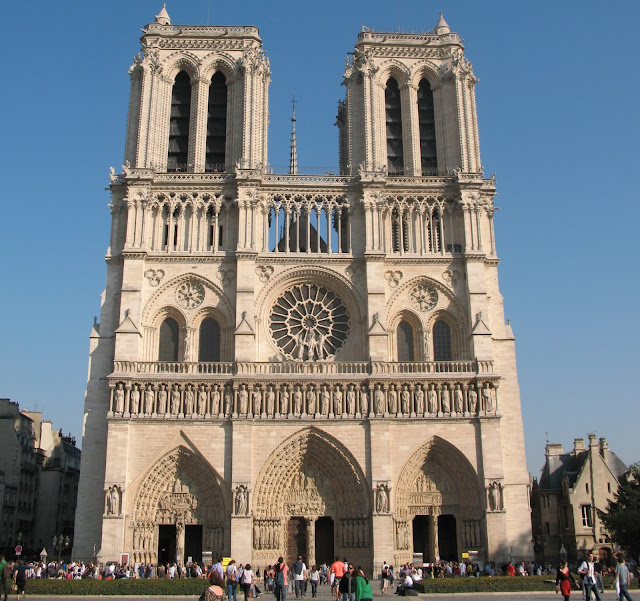 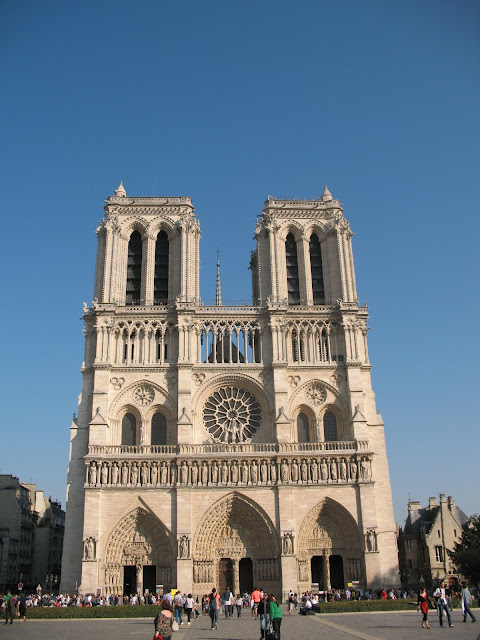 The visuals I can provide from my brief visit are less than stellar (slightly askew shot of the front, and interior shot complete with dust orbs... or if you are imaginative, the spirits of past parishioners… yes, yes, that's definitely what they are). What I can offer is an amusing account of the events surrounding my visit.

At the airport I was buying my train tickets into Paris, and I found a gentleman trying to break up a 500 euro bill (unsuccessfully as one might imagine) so he could get a taxi. If I recall correctly he was having a slightly confused, circular conversation with a rather curt desk worker (somewhat understandable since he seemed a little bit out of touch with reality). I suggested he could just ride the train in and it would be easy and much more affordable than a cab (which the clerk also had suggested), however he was insecure about the whole situation, so I suggested he could follow me. I had planned out which stop I was going to get out at. My goal was to see Notre Dame, the Seine, walk the grounds/parks around the Lourve and see the Eifel Tower. With one exception (I'd soon find out) his goals were the same, however he wanted to take a taxi to everything when we arrived. I suggested once we were in the city we could go our separate ways, because I wanted to really walk around on foot, take in the people and the atmosphere. Perhaps lonely, the man who I learned was an executive at a Malaysian shoe manufacturer (or something similar) he continued to accompany me (eliciting an internal sigh from yours truly) to try out my unconventional on-foot touring style.

First stop was Notre Dame, and he seemed shocked that I wanted to go there. I explained that it was iconic, historic, beautiful architecture, Victor Hugo, blah blah blah, but this seemed a touch lost on him. Now mind you, he immediately expressed disappointment in Paris saying that it looked just like Detroit (Maybe I need to reconsider not having spent time outside of Detroit's airport?). Once inside the Cathedral, I was rubbernecking looking at the windows, listening to a choir sing, and I began noticing that my friend had become very nervous. He asked me if we were supposed to be inside, and I tried to point out that we were amongst crowds of fellow tourists. Regardless something about the beautiful Cathedral spooked him and he said he wanted to leave, and I said I needed more time. I wished him well, and he went off on his own. I speculate that perhaps being of a different faith background may have made him insecure. Not all sacred spaces are as open to outsiders as Notre Dame after all, and I got the impression that he thought his being there was inappropriate somehow. 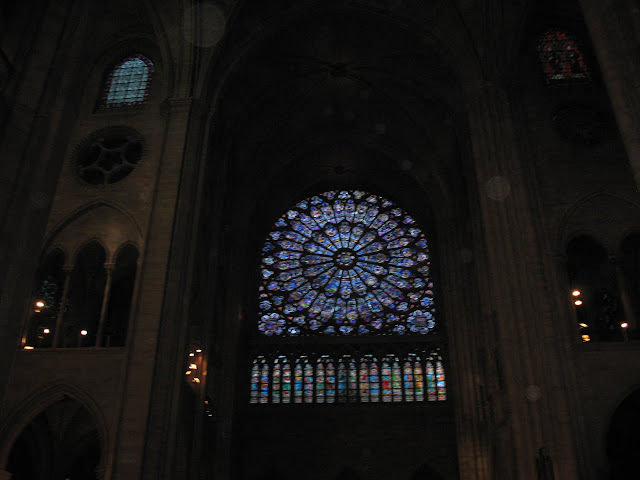 I ended up spending an hour or so wandering the church and I suspect my lack of photos was due to prohibition of flash photography, and the inability to get good shots with out it. I did run through Paris, and had a good time seeing the sites. Notre Dame was my favorite spot in Paris.

Text and photographs by George Parks
Sources are embedded in links