Pillars & Foundations documents an exploration of communities, as well as faith through religious institutions. My intent is to share experiences, and spread the positivity that I observe. The hope is to provide a window into these organizations allowing those who might not other wise venture in to appreciate these thoughtful, often intimate groups in our midst. Faith centers embody a drive to make a difference which they deliver upon, regardless if it is with one person looking for hope & community, or a recipient of their expansive charitable work. 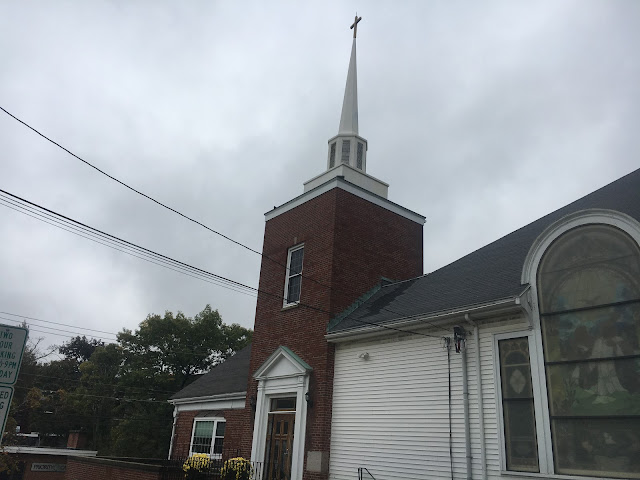 There isn't much information about church history available on the website other than the founding being in 1903. The date on the bell tower appears to say 1884 suggesting that perhaps portions of the church predate the Green Street Baptist organization. Another addition, of which there seems to be several, has the date 1958 on a cornerstone. With much of the original building obscured by a stretch of brick building on Green Street, that houses offices for several non-profits including a branch of the Red Cross, one might anticipate that the structure as a whole is newer, perhaps all mid century or later. However upon entering the sanctuary you are greeted with ornate finishes of woodwork, a unique textured, patterned ceiling, and large stained glass windows, all of which feel very early twentieth century. It is beautifully maintained with yellow paint on the walls creating a cheerful feel, and floors that seem recently done in what is probably a wood-like tile, which is a big improvement over carpet or vinyl-asbestos tile that often appears in many churches in the area.

Cannabis Stocks are Hot on the Watchl…
Boston’s Fidelity: A new face of the …
Four Things Jesus Says About a Discip…
Best Gaming PC Build for 1080p: Under…
Beautiful Celebrity Couple Pics 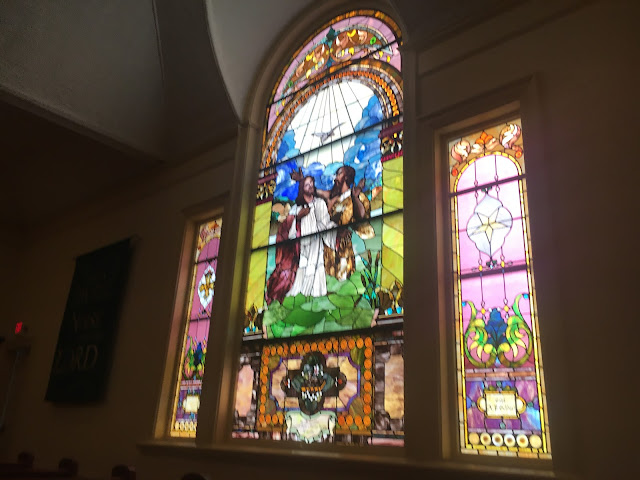 I was warmly greeted by several congregants, asked to sign the guestbook, and made well aware of the coffee hour after the service. This week's coffee hour was a non-profit fair featuring several organizations that Green Street frequently does volunteer work for. The bulletin describes the church as "The friendly church where children learn, youth mature and families grow in Christ." Similarly the website states:

Green Street Baptist is an American Baptist Church.  We are proud of our identity as American Baptists, because American Baptists are a caring, open minded, ecumenical, deeply committed, mission minded Christian family. Jesus is the center of what we do and why we do it.

Green Street makes a point of mentioning the value of laughter, and that they work to keep their services interesting, suggesting that some might even consider them irreverent. 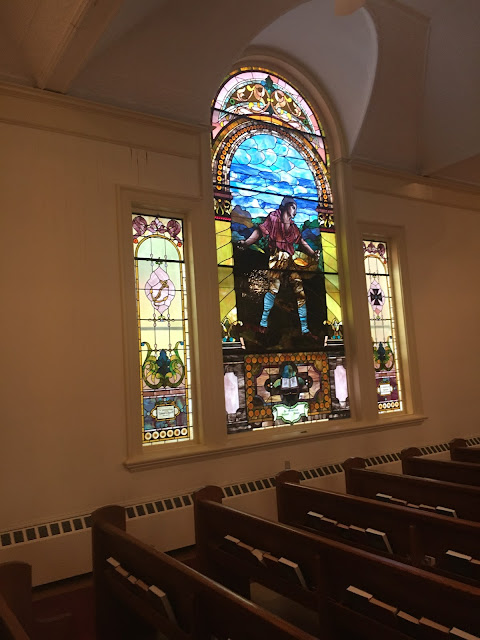 Rev. Michael Woolf led the congregation through announcements, sending the children off to Bible study, and several hymns were performed. The passing of the peace was one of those moments where everyone left their pews to greet nearly everyone else in the sanctuary, and because this was well attended some time was taken to do this. Uniquely, the first verse of the hymn "What a Friend We Have in Jesus," was played for this activity, only to commence once people had made it back to their seats.
The reading Matthew 25:31-46 tied in seamlessly with the sermon to come. One particularly relevant portion of this passage is: "Truly I tell you, whatever you did for one of the least of these brothers and sisters of mine, you did for me." This represents God's words as people are entering heaven, after they are told, "For I was hungry and you gave me something to eat, I was thirsty and you gave me something to drink, I was a stranger and you invited me in, I needed clothes and you clothed me, I was sick and you looked after me, I was in prison and you came to visit me.’
Rev. Michael thoughtfully introduced Gabriella Snyder Stelmack, the Executive Director of the Bread of Life, a non-profit that provides meals to those in need. She led a moving sermon about the history of her organization, and her motivations for her work entitled "Jesus and His Most Distressing Disguise." Stelmack told the story of an Episcopal church holding a mid-week supper for congregants which occurred during the depression. When word got out on the street, non-congregants, down on their luck began showing up. Rather than getting turned away, some insisted that the doors must be open to them. Through this gesture Bread of Life was started and has since gone on to feed countless many on a full time basis. Stelmack shared the story of Fritz Eichenberg, a German-American artist who fled Germany during the rise of the Nazi party. Regardless of being Jewish, Eichenberg's art occasionally took Christian themes. One such piece Christ of the Breadline, depicts Jesus amongst the suffering, waiting to receive food in a depression era line. Stelmack keeps a print of this piece in her office to remind herself of the importance of her work.
Taken altogether, the theme of the reading and the sermon is that people should strive to help all individuals who are in need. 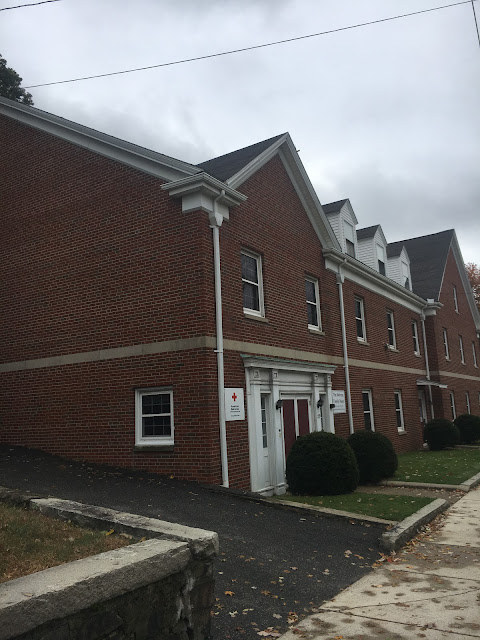 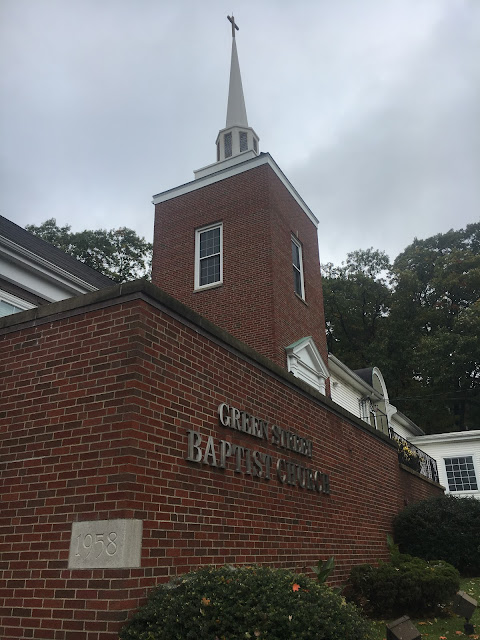 The Mission Fair which I mentioned previously is a fine example of Green Street's devotion to reaching beyond the congregation walls and improving lives of others in their greater community. At the fair Bread of Life, an organization called Give Kids The World (helps children with illnesses), Lahey Hospice Care, Mission of Deeds (provides essentials to those in need), and New England Seafarers (assists the marine based workforce with needs), all had tables and representatives to engage congregants. Additionally on the day I attended Green Street was actively participating in the Melrose Alliance Against Violence Walk (MAAV) and had recommended attending a vigil for the Tree of Life Synagogue shooting victims at Temple Beth Shalom in Melrose, MA. Green Street Baptist has a food pantry, and requests for items are included in their weekly bulletin. Additionally there are various social activities for congregants to participate in. 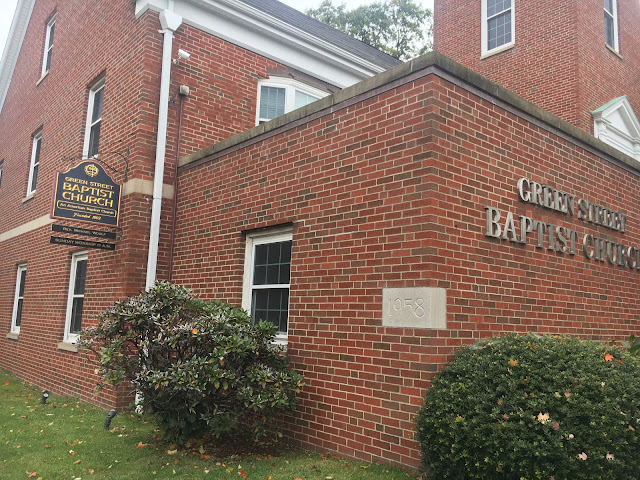 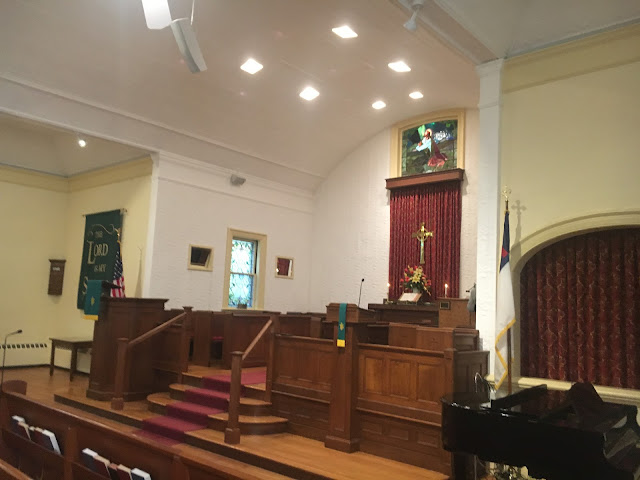 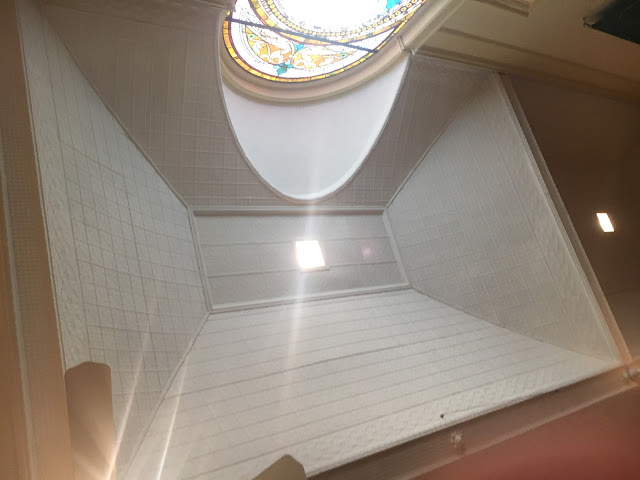 Through charity, good will, activism, and the living of their faith, congregants of Green Street Baptist Church add tremendous value to Melrose and the surrounding communities.

Text and photographs by George Parks
Sources are embedded in links