The Grim Reaper : US troops decimate Russian mercenaries in Syria 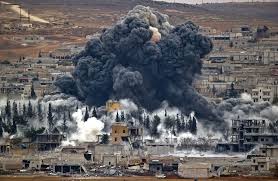 Mercenaries vanquished in a failed attempt to storm a base manned by US special forces and US-backed Arab and Kurdish troops in the Deir ez-Zor region, east of the Euphrates River

It was probably the deadliest clash between the former Cold War foes in a long while.

According to reports, the clash took place in the small hours of Thursday when 300-500 pro-Assad troops advanced with tanks and artillery on the Syrian Democratic Force (SDF) base.

US ground commanders had no alternative than to call in F-15 jets, MQ-9 Reaper drones, B-52 bombers, an AC-130 gunship and Apache helicopters.


A gun battle went on for about three hours and sources in Russia have put the number of their dead as high as 200.

Several of those who died were working for a Russian company called Wagner.  The company was reported to have sent hundreds of private contractors to Syria to prop up the Russian military.  The scale of the Russian losses slowly came to light as friends and relatives mourn on social media.

You’re Not Alone; It Gets Better
The dashing Russian adventurer who fo…
8 Superhero Gadgets Which Actually Ex…
Interview with the legendary comic bo…
Tomcat Tompkins – Part 5

The Grim Reaper : US troops decimate Russian mercenaries in Syria