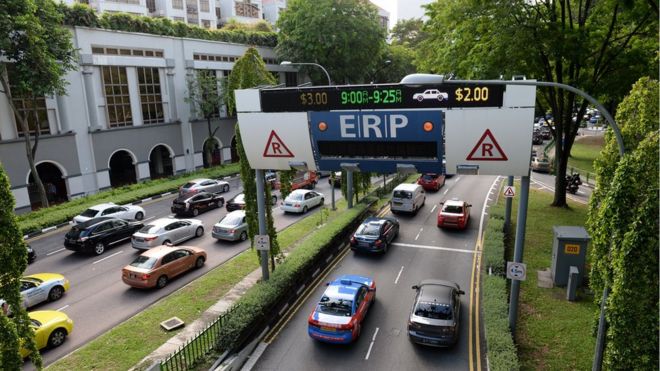 Image copyrightGETTY IMAGESSingapore will freeze the Number of vehicles on its roads from next February.
The Land Transport Authority (LTA) cited the scarcity of land and public transport upgrades as reasons for the cap.
The tiny, densely populated country has strict policies aimed at limiting the number of cars on its roads.
As a result, car ownership rates are far lower in Singapore than in other wealthy countries.
In addition to caps, Singapore has a deliberate policy of elevating the cost of owning a car in an effort to reduce the number of vehicles on the road.
It does this through a system which requires bidding for the right to own and use a vehicle for a limited number of years, known as a Certificate of Entitlement (COE).
As a result, a mid-range car in Singapore can typically cost about four times as much as it would in the United States.
The LTA said the new cap won't significantly affect the number of available COEs, because most of them aren't newly created, and instead come from deregistered cars.
The new growth cap is slightly lower than the existing 0.25% limit, which has been in place since 2015.
It applies to private cars and motorcycles, but not to goods vehicles and buses.