The Bible is not for charismatics nor is it for evangelicals 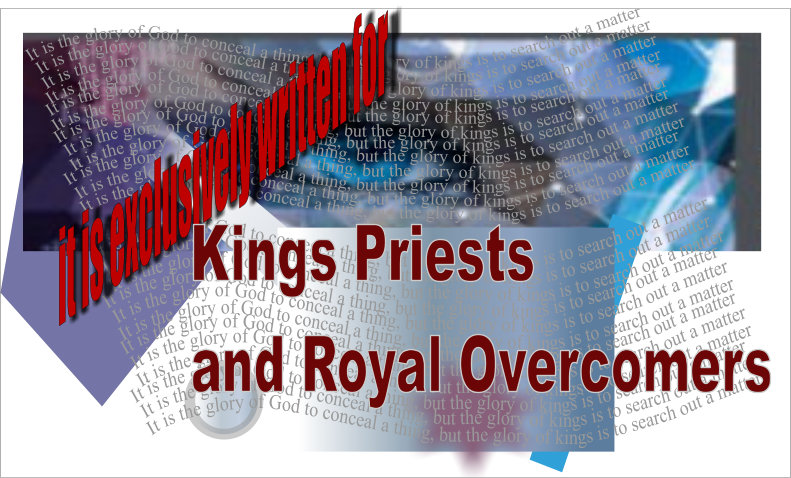 if you seek.....you shall find Deuteronomy 4:29. But if from there you seek the LORD your God, you will find him if you look for him with all your heart and with all your soul.

But when he, the Spirit of truth, comes, he will guide you into all the truth. John 16.13

But you are a chosen people, a royal priesthood, a holy nation, God's special possession, that you may declare the praises of him who called you out of darkness into his wonderful light. 1Peter 2.9

The Lord said to Samuel, “How long will you grieve for Saul, when I have rejected him as king over Israel? [a]Fill your horn with oil and go; I will send you to Jesse the Bethlehemite, for I have chosen a king for Myself among his sons.”...................
Then Samuel took the horn of oil and anointed David in the presence of his brothers; and the Spirit of the Lord came mightily upon David from that day forward. 1 Samuel 16

So Elijah went from there and found Elisha son of Shaphat. He was plowing with twelve yoke of oxen, and he himself was driving the twelfth pair. Elijah went up to him and threw his cloak around him.He left the oxen and ran after Elijah and said, “Please let me kiss my father and my mother, then I will follow you.” And he said to him, “Go back again, for what have I done to you?”

(NOTE this interesting fact...David was the boy out the back with the sheep....Elisha was at the tail with the 12th pair of oxen.)

Blessed be the God and Father of our Lord Jesus Christ, who has blessed us with every spiritual blessing in the heavenly places in Christ, 4 just as He chose us in Him before the foundation of the world, that we would be holy and blameless before Him. In love 5 He predestined us to adoption as sons through Jesus Christ to Himself............

verse 9
He ]made known to us the mystery of His will, according to Hiskind intention which He purposed in Him 10 with a view to an administration suitable to the fullness of the times, that is, the summing up of all things in Christ, things in the heavens and things on the earth.

CHRIST: far above all rule and authority and power and dominion, and every name that is named, not only in this age but also in the one to come. 22 And He put all things in subjection under His feet, and gave Him as head over all things to the church, 23 which is His body, the fullness of Him who fills all in all.

Jesus had said pray these words

Our Father who is in heaven
Hallowed...most holy be your Name
Your Kingdom Come
Your Will be done
On Earth AS IT IS IN HEAVEN

For this reason was the Son of God made manifest that He might destroy all the works of the Evil One 1 John 3.8

No man can enter into a strong man's house, and seize his goods, except he will first bind the strong man; and then he will plunder his house.
Mark 3.27

The Gates of hell shall not prevail against my congregation, my ekklesia, my gathered church
Matt16.18

remember the 4 phrases above at the top? a chosen people, a royal priesthood, a holy nation, God's special possession

What kind of King is Jesus?
He who is the blessed and only Sovereign, the King of kings and Lord of lords, 16 who alone possesses immortality and dwells in unapproachable light, whom no man has seen or can see. To Him be honor and eternal dominion! Amen. 1 Tim 6.15

The heavens -- the heavens are Jehovah's, And the earth He hath given to sons of men,Ps 115.16
ie....NOT to angels...nor specifically devils.
.
Again, the devil *took Him to a very high mountain and *showed Him all the kingdoms of the world and their glory; 9 and he said to Him, “All these things I will give You, if You fall down and worship me.” 10 Then Jesus *said to him, “Go, Satan! For it is written, ‘You shall worship the Lord your God, and serve Him only.’”   Jesus did not pay any attention to the devil's usurped rulership through men "in the independent self spirit. As far as He was concerned Psalm 24.1 was still true....the earth is the Lord's and the fulness thereof.


What is the nature of our KINGING as a church and as ministries in church?
Luke 22:25 And He said to them, “The kings of the Gentiles lord it over them; and those who have authority over them are called ‘Benefactors.’ 26 But it is not this way with you, but the one who is the greatest among you must become like the youngest, and the leader like the servant.
Notice Jesus summed up the all time ruse of worldly rulers perfectly....selling their control and rights over people's lives as benefits instead in the form of being BENEFACTORS of the people.

1 Peter 5:2shepherd the flock of God among you, exercising oversight not under compulsion, but voluntarily, according to the will of God; and not for sordid gain, but with eagerness; 3nor yet as lording it over those allotted to your charge, but proving to be examples to the flock. 4And when the Chief Shepherd appears, you will receive the unfading crown of glory.

New American Standard Bible (NASB)
1 Corinthians 4
Let a man regard us in this manner, as servants of Christ and stewards of the mysteries of God. 2 In this case, moreover, it is required of stewards that one be found trustworthy. 3 But to me it is a very small thing that I may be examined by you, or by any human court; in fact, I do not even examine myself. 4 For I am conscious of nothing against myself, yet I am not by this acquitted; but the one who examines me is the Lord. 5 Therefore do not go on passing judgment before the time, but wait until the Lord comes who will both bring to light the things hidden in the darkness and disclose the motives of men’s hearts; and then each man’s praise will come to him from God.

6 Now these things, brethren, I have figuratively applied to myself and Apollos for your sakes, so that in us you may learn not to exceed what is written, so that no one of you will become arrogant in behalf of one against the other. 7 For who regards you as superior? What do you have that you did not receive? And if you did receive it, why do you boast as if you had not received it?
I wish that you had become kings so that we also might reign with you.
8 You are already filled, you have already become rich, you have become kings without us; and indeed, I wish that you had become kings so that we also might reign with you. 9 For, I think, God has exhibited us apostles last of all, as men condemned to death; because we have become a spectacle to the world, both to angels and to men. 10 We are fools for Christ’s sake, but you are prudent in Christ; we are weak, but you are strong; you are distinguished, but we are without honor. 11 To this present hour we are both hungry and thirsty, and are poorly clothed, and are roughly treated, and are homeless; 12 and we toil, working with our own hands; when we are reviled, we bless; when we are persecuted, we endure; 13 when we are slandered, we try to conciliate; we have become as the scum of the world, the dregs of all things, even until now.

14 I do not write these things to shame you, but to admonish you as my beloved children. 15 For if you were to have countless tutors in Christ, yet you would not have many fathers, for in Christ Jesus I became your father through the gospel. 16 Therefore I exhort you, be imitators of me. 17 For this reason I have sent to you Timothy, who is my beloved and faithful child in the Lord, and he will remind you of my ways which are in Christ, just as I teach everywhere in every church. 18 Now some have become arrogant, as though I were not coming to you. 19 But I will come to you soon, if the Lord wills, and I shall find out, not the words of those who are arrogant but their power. 20 For the kingdom of God does not consist in words but in power. 21 What do you desire? Shall I come to you with a rod, or with love and a spirit of gentleness?

The whole of the chapter 4 is included here for there is much to meditate upon....
the attitude of the apostle
the kind of work we are about
the imparting of Christ, His Person, His Life, His gifts....well the proof is in God;s own commendation and in REAL POWER.

Earthly power is largely to do with pyramid structures and learning to operate within that pyramid, the pyramid itself being what quite often lends you the power.
Spiritual authority is RAW POWER, it is the very  power of God.


So to summarise
We have been trying to sell the Bible and the Bible's teaching to charismatics and evangelicals who are not themselves sorted on what the Kingdom means.

The Kingdom means accepting the Kingship and Lordship of God.
Much isn't very obvious, especially coming from all our different backgrounds...so we are expected to learn to seek out the reign of God and revelation of its meaning.
The Kingdom is about the reign of God now.
The Father said Sit at my right hand and Reign until your enemies become your footstool.
Jesus isn't budging.
Instead, Ephesians 1:22  says
And He put all things in subjection under His feet, and gave Him as head over all things to the church, 23 which is His body, the fullness of Him who fills all in all.

JESUS HAS BEEN GIVEN AS HEAD OVER ALL THINGS (AS A GIFT) TO THE CHURCH.
Our Kingship and Priesthood is exercised in the realm of real power.
These signs shall follow after....said Jesus.
Jesus whole operation Hebrews 7 says, is not based on the power of some levitical priesthood...but setting that all aside, His own ministry comes out of the KINGLY tribe of Judah, of which nobody ever became a priest. No Jesus authority is based on His own indestructible Life that He also gives to us.
And this is clearer still, if another priest arises according to the likeness of Melchizedek, 16 who has become such not on the basis of a law of physical requirement, but according to the power of an indestructible life. 17 For it is attested of Him,

“You are a priest forever
According to the order of Melchizedek.”

We have been preaching to evangelicals and charismatics who always have their internal eye on a get out clause....Jesus coming back and doing it all. The Bible is not written to those, it is written to people ardent about learning how to co King....but not this time in the manner of gentile rulers, but in true spiritual authority that comes from an indestructible LIFE.

THIS difference in attitude and belief is one huge reason churches are not going anywhere, and certainly not extending the rule of the Son in their localities.

The Bible is not for charismatics nor is it for evangelicals