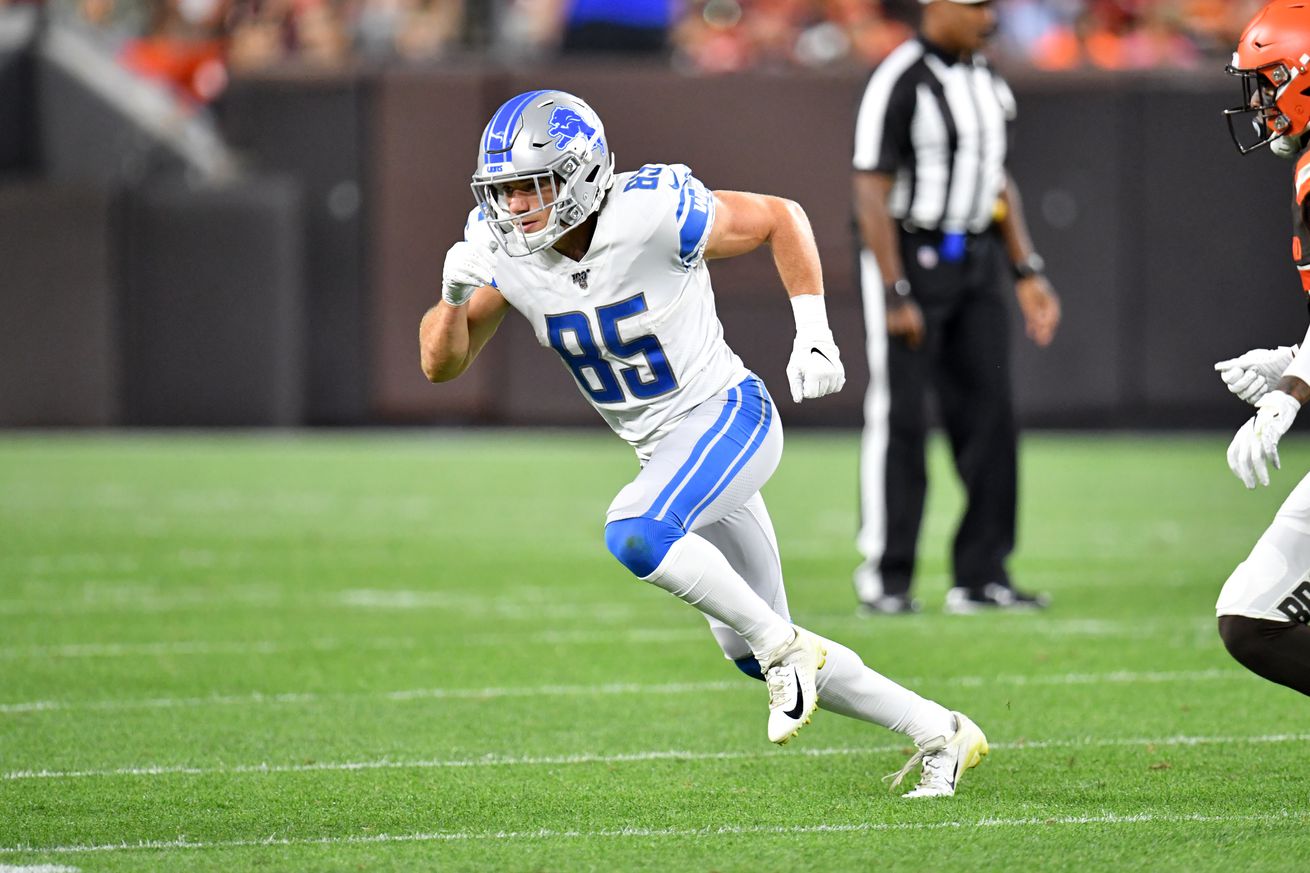 These players could sneak onto the Roster, spend the season on the Practice Squad, or miss the team entirely.

As our countdown of the Detroit Lions 2021 roster continues, we’ve reached the point where some of these players could realistically contribute this season. Some of these players are firmly on the roster bubble, others will undoubtedly serve time on the practice squad, giving them an opportunity to develop or even see the field should the injury bug strike the roster.

So while a lot of these players may not come with expectations in 2021, they could play an important role in both 2021 and beyond. Here are the players we ranked 70 through 61 on the Lions’ current roster.

Note on methodology: Six Pride of Detroit members ranked the entire roster from 89 to 1. This list represents the averaged rankings of all six lists.

The Lions’ linebacker depth will be worked out during the upcoming month of training camp, and Tavante Beckett may be a name to keep an eye on. The undrafted rookie out of Marshall received a significant payday from the Lions after the draft, and as our own Erik Schlitt said in his linebacker training camp preview—and in our latest Spotify Greenroom podcast—Beckett is the small, speedy type of linebacker Detroit is now valuing. He could not only make the team, but there’s a shot he contributes in Year 1 on special teams.

Another undrafted rookie, Wright comes to the Lions after an unassuming career at Notre Dame. Wright is purely a blocking tight end, having only caught seven passes in three years in college. Seems like a longshot to make the roster, but if Dan Campbell can mold him, he certainly has the athletic profile to make it in the NFL:

That’s not a typo. One of our writers has Brown 39th on our roster (Ryan Mathews). One reason for that is likely our conversation with Lions running back Jamaal Williams, who specifically pointed to Brown as one of the bigger trash talkers during OTAs and minicamp after shutting him down the play.

Brown has been in the league since 2019, and even technically won a Super Bowl with the Chiefs. He’ll figure into the Lions’ nickelback competition with Mike Ford and Corn Elder, but he has only played nine career defensive snaps and is coming off a season lost to an ACL injury.

The Lions’ are seeking to replace Matt Prater this year, because.... reasons? Wright will enter camp as the runner up, likely behind veteran Randy Bullock. Bullock doesn’t come without his faults, though, which means we may have a legitimate camp battle on our hands.

Wright actually played three games for the Steelers last year and made all four of his field goal attempts and seven extra points. However, he hasn’t attempted a kick over 46 yards yet. At UCF, Wright set records for field goal accuracy and consecutive extra points made, but, again, his carer long in college was just 50 yards.

The Lions will likely seek a backup center this training camp, and that person could come from a variety of places. Brown got a head start last year, joining the practice squad in December and even getting some playing time in the final two games of the season.

Perhaps this year’s most likely candidate to be a camp darling, Sage Surratt was one of the hotter names the Lions acquired as an undrafted rookie. Head coach Dan Campbell even said he’d do a backflip if the Lions were able to sign him after the draft.

Surratt had a quiet minicamp, but as a big, physical receiver, Surratt has a chance to stand out in the next few weeks of training camp.

Kennedy is the first person on our list who returns after spending last year’s camp with the team. Kennedy has actually been around since 2019, spending most of that time on the Lions practice squad. Under a new regime, it’s hard to know if Kennedy will still stick around, but Kennedy has some speed and shake to them.

Elliott is entering his second season in the NFL after spending the entirety of his rookie year on the practice squad. Just by notion of sticking around on an NFL roster for a year, he jumps 26 spots in our ranking. (Okay, the roster is also probably a little worse at the bottom).

That all being said, Elliott has a new chance to impress a fresh coaching staff, and if he can use what he learned in his rookie season, he could potentially even make an impact on special teams in his sophomore season.

The drafting of Penei Sewell likely pushes Dan Skipper to a precarious spot on the roster, depending on whatever happens in the Tyrell Crosby saga. Either way, Skipper is firmly on the roster bubble right now.

The tallest man on the team at 6-foot-9, Skipper has made eight game appearances in the last two years for the Lions as a serviceable backup. But he’s been jumped by defensive convert Matt Nelson on the depth chart, and that could mean another year spent mostly on the practice squad or a release.

Cornell’s NFL career is off to an awful start. He lost his rookie season to an Achilles injury, and he’ll miss the first three games of his sophomore season thanks to a suspension for violating the team’s substance abuse policy.

He’ll have to impress in training camp to prove he’s worth keep around after his suspension, too. The Lions have made a lot of changes to their front seven, and Cornell—last year’s seventh-round pick—could very well be the odd man out. He seems more likely to spend his first fully-healthy season on the practice squad... if he makes it there.