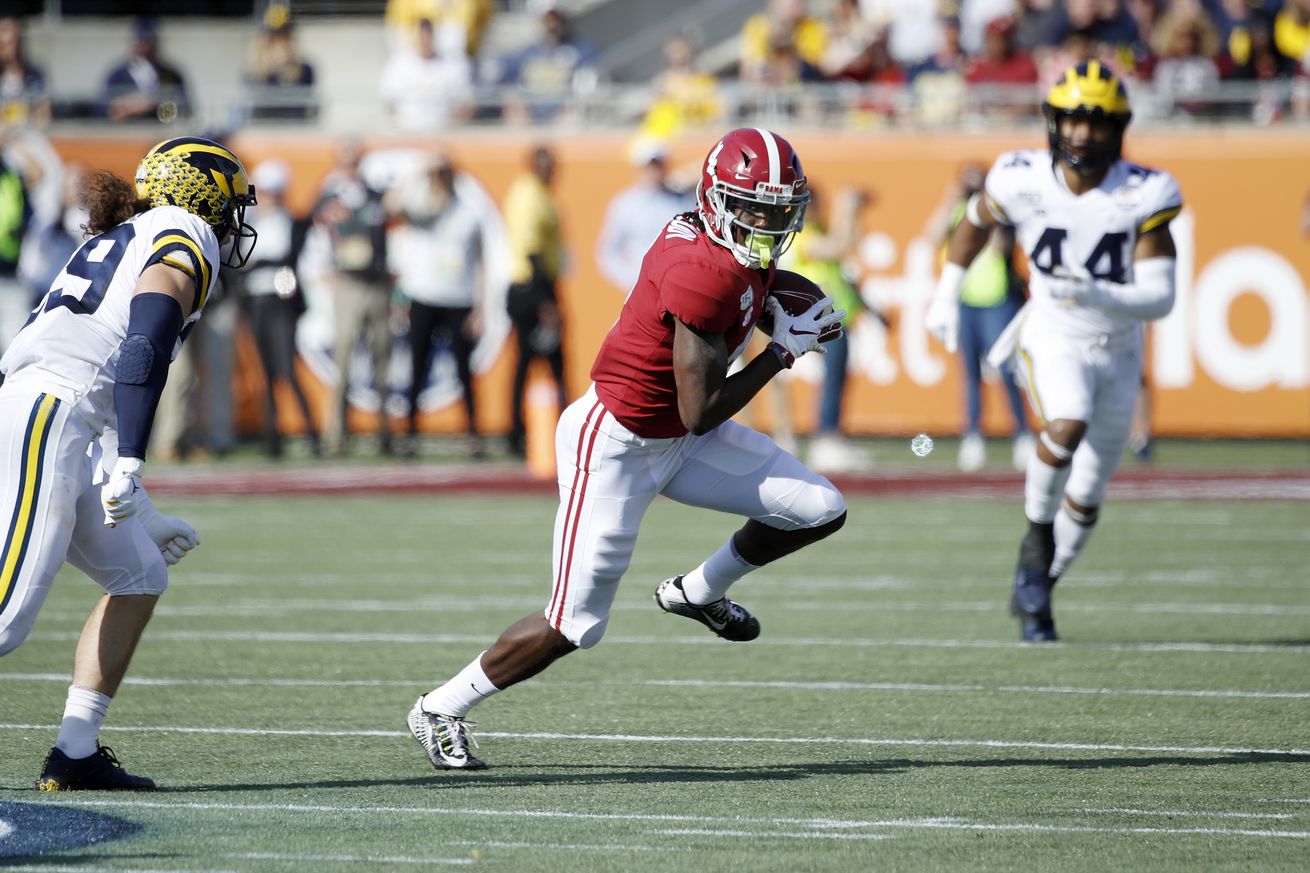 With potential long term concerns at wide Receiver from 2021 on, the Lions may be proactive securing the position in this draft.

The Detroit Lions wide receiver group was excellent throughout the 2019 season with both Kenny Golladay and Danny Amendola hitting career marks, along with a strong showing by Marvin Jones. As the 2020 free agency is poised to begin, however, the team is facing the prospect of losing Danny Amendola to free agency and potentially making a choice with Marvin Jones, who is set to become a free agent in 2021. Additionally, the team has to decide if they’re going to extend Kenny Golladay, whose rookie contract is set to expire at the end of the 2020 season.

With all of that uncertainty, the team is certainly going to be paying close attention to the 2020 wide receiver draft class, which boasts incredible talent of nearly all shapes and sizes.

The number one receiver for most entering the 2019 season, it’s a bit surprising that Jeudy can now be considered somewhere between third and fifth for many, despite no real failings on his part. It’s a true testament to how strong this draft class is.

The Combine is more important for Jeudy than some of the others, as there have been some questions about his actual measurable athletic talent, similar to the concerns that sprang up when Calvin Ridley came out a few years ago. One of the best route runners in the past few years, Jeudy would fill the void left by Danny Amendola in spades, potentially turning that position into a true offensive weapon rather than an outlet.

ESPN High School RecruitingScouting ReportWhat's On Draft | The Draft Network | NFL Mocks | Music City Miracles | With the First Pick | Tankathon | Hogs Haven | NFL Draft Geek | This player is a prospect in the 2020 NFL Draft. All metrics that have been recorded are unofficial if the metric is...

Fast and dangerous with the ball in his hands, Jalen Reagor is expected to tear it up at the Combine, having run a 4.41 coming out of high school and allegedly running in the 4.3 range since that time. Concentration drops are an issue and his size and frame are going to bring some comparisons both positively and negatively to recent deep threats like Will Fuller or John Ross, though Reagor isn’t quite as slender. He may not endear himself to Lions fans with all the drops he’s had in his career, but it’s tough to argue with the positive plays he shows on tape.

ESPN High School Recruiting Scouting ReportsWhat's On Draft | The Draft Network | NFL Mocks | Pro Football Network | Colts.com | This player is a prospect in the 2020 NFL Draft. All metrics that have been recorded are unofficial if the metric is highlighted in yellow.

Hill doesn’t have the range you’d expect at his size, and he isn’t big enough to overcome that concern. He’ll likely make his living on the inside in the NFL, but that happens to be an area the Lions are facing a deficit at the moment.

A clean route runner with smooth change of direction, Hill is more quick than he is fast but finds ways to create separation whenever defenders fail to get a hand on him. He can get knocked around in press, but any offensive coordinator who uses pre-snap motion can find ways to get him off the line with a clean uniform pretty easily.

ESPN High School Recruiting Scouting ReportWhat's On Draft | The Draft Network | Bleacher Report | Pro Football Network | This player is a prospect in the 2020 NFL Draft. All metrics that have been recorded are unofficial if the metric is highlighted in yellow. Once the NFL Draft has concluded, player scores will be...

Shenault is a versatile weapon who can move all over the line playing any wide receiver position, H-back, some running back, and as a wildcat runner or passer. Truly able to make something out of nothing from nearly anywhere, Shenault is an interesting evaluation because it’s easy to see how you can use him as long as your offensive coordinator isn’t a dunce. Darrell Bevell is no dunce, and it would be a lot of fun to see what he could scheme up for a player like Shenault.

The Combine is an opportunity for Shenault to truly show his athletic talents, as I’ve seen some claiming he’s going to light it up a la Julio Jones, and others who are concerned he’s more Anquan Boldin-like in athletic ability, relying more on strength and savvy than speed and explosiveness. I tend to fall more towards the superb athlete than the opposite, but that’s why the Combine is so exciting!

ESPN High School Recruiting Scouting ReportWhat's On Draft | The Draft Network | With the First Pick | This player is a prospect in the 2020 NFL Draft. All metrics that have been recorded are unofficial if the metric is highlighted in yellow. Once the NFL Draft has concluded, player scores will be finalized and...

Am I using this opportunity to stan one of my favorite players again? There aren’t a lot of perks to this job, you’d better believe I’m going to grab onto the ones I have when I can.

I’m a huge fan of James Proche’s tape and the little dude is a crazy play waiting to happen every time the ball was thrown at him in college. The Combine is big for him because despite my pretty constant adoration, I don’t expect him to measure well in pretty much any category. I’m hopeful that I’m proven wrong and he’s going to tear up every drill, cementing him as not only “Younger Danny Amendola” but also “Faster, more athletic and explosive Danny Amendola”.

Expected to measure in below average, doesn’t play nearly as tough or as strong as his size would suggest. Has a lot to prove.

Tweener athlete in a similar flex role to Ty Montgomery of the Packers, offering plenty of offensive versatility if he can be developed.

Consistently moderate production at Ohio State, would require a huge Combine to show he’s more than just a role player.

Seems to be a good athlete with great size who catches well outside of his frame.

Big-play receiver who doesn’t get nearly the hype he looks like he should. Big week for him.

Physical and strong, but not as explosive as I’d like from a bigger receiver. Has some very serious truthers.

Considered by many to be WR1 in this class, Lamb looks like a top-tier athlete with incredible ball skills on tape.

Big guy who needs the Combine to shed questions about speed, explosiveness, and agility.

Small and slender slot option, needs to measure in bigger than he played in 2019.

Tall and lengthy possession receiver, needs the Combine to show he can be more than a No. 2 guy.

Small and slender, either needs to measure up bigger than he played or show enough athletic talent to make it less of an issue.

Will be a 24-year-old rookie after five years in Lansing with only moderate yearly production.

Lightning fast, running a 4.38 out of high school, and more physical than you’d expect for a speedster.

Another bigger receiver (lots of those in this class) who thrived in an offense gaining traction in the NFL.

Incredible athlete who was never able to find the production his top-tier talents should have made easy.

Shifty inside runner, but upside is a huge question mark.

Tall receiver who makes his living winning with football IQ rather than athleticism.

True speedster who adds a vertical element to any offense. Draft projection is all over the place, but expect him to go high.

The other Rhode Island receiver. Has to show level of competition isn’t an issue.

Needs to dissuade concerns about his speed and explosiveness at the Combine.

Tall but slender, needs to both weigh in larger than he played and show he didn’t lose any athleticism in doing so.

Developmental receiver with great size, may see a conversion to TE like we’ve seen several players make in recent years.

Middle of the road in a lot of areas, needs to show he is more than that.

Tiny receiver with excellent after-the-catch ability, needs to bulk up if he can and show he won’t lose any speed in doing so.

Big jump-ball guy who struggles with separation at times.

Versatile receiver who played some quarterback in his college career. Provides some interesting wrinkles for an offensive play caller.

Played quarterback for Navy, which means he’s a wide receiver and/or running back in the NFL. Needs to put on some good weight and show he can be a RAC guy.

Speedster with good size, may be a better pro than college receiver.

Yet another bigger receiver who, much like several others, needs to show his athletic ability extends beyond size.

One of the most productive receivers in the nation for 2019, Bayless wants to show he has the athleticism to match his gaudy statline.

Medicals are the biggest issue at the Combine for Davis, who many consider a sleeper if he’s healthy.

Fairly productive receiver hoping to put his name into a larger discussion of draftable receivers.

Interviews at the combine play a larger part for Cephus, who was found not guilty on two charges of sexual assault. Athletically leaves much to prove, but has some promising tape.

Tall and lengthy receiver with limited production looking for a way to stand out.

Above average in most areas, but not sure he’s elite in any one. Should be well coveted at the Combine.

Broke out at Colorado after barely making an impact at Texas Tech, Brown needs to show his best football is ahead of him.

Has a LOT of believers in draft circles, so he’s one who could see his stock rise or drop sharply depending on how his week goes in Indy.

A true H/W/S (Height/Weight/Speed) receiver, the Combine is a good time for Cleveland to shine.

Serious athletic concerns, which is just the type of thing the Combine is for.