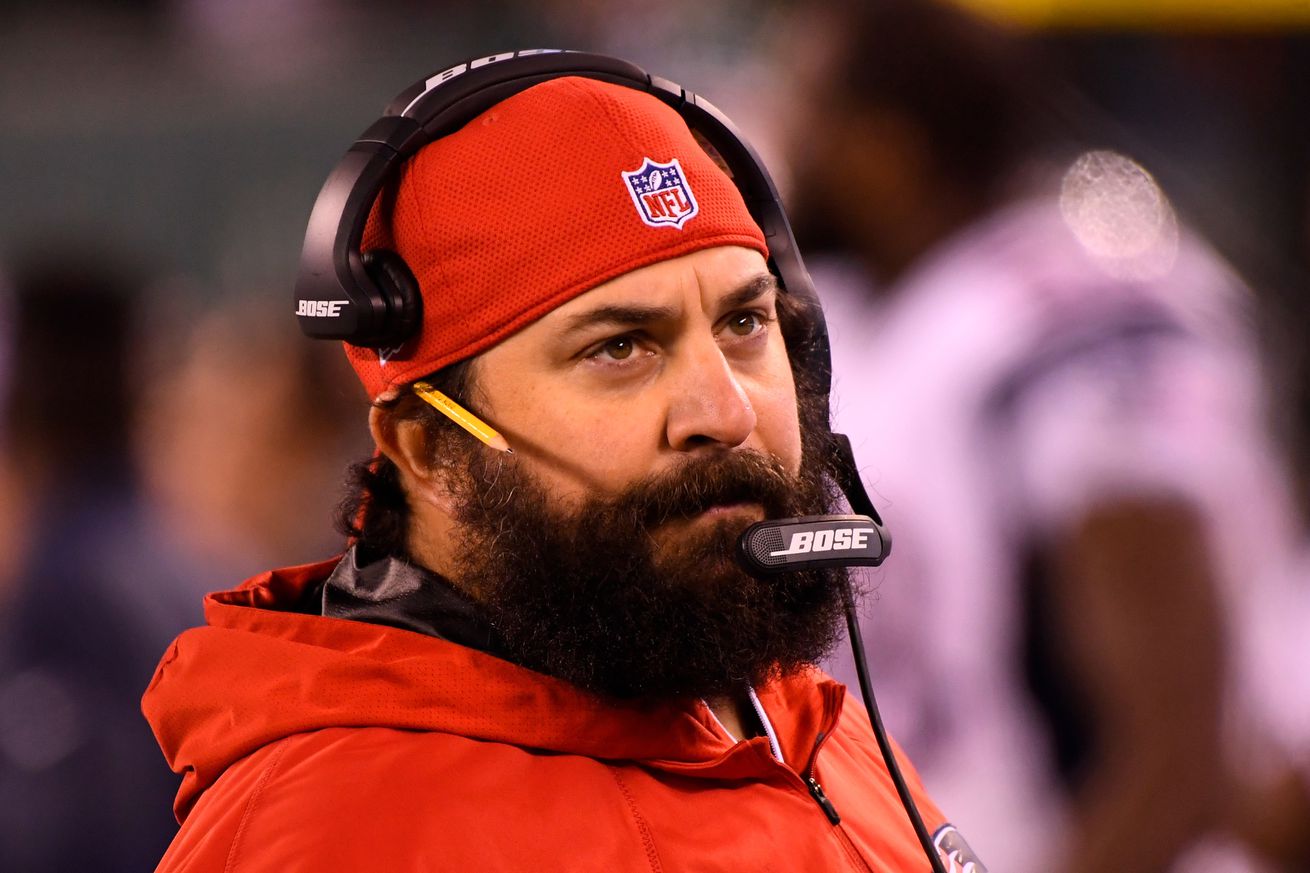 A deep dive into Matt Patricia’s performance as defensive coordinator since 2012.

It’s looking very likely that the Detroit Lions’ next head coach will be Patriots defensive coordinator Matt Patricia. While many Lions fans were hoping for this result, there remains a non-insignificant portion of fans that remain skeptical. Some of that comes from anxiety over the Patriots Tree that so rarely bears fruit.

But others are concerned about Patricia’s work as defensive coordinator, convinced it’s not as good it seems. The Patriots may have ranked in the top 10 in scoring Defense every season under Patricia, but the DVOA and yardage numbers are much different. Accordingly, 2017 hasn’t been too kind on New England’s defense.

So to clear up how Patricia has actually performed as defensive coordinator, I investigated New England’s defense since 2012. Take a look:

In Patricia’s first year as defensive coordinator, he had a pretty average season. Led by a roster full of rookies—the Patriots drafted DE Chandler Jones, LB Dont’a Hightower, S Tavon Wilson and DE Jake Bequette with their first-through-third round picks—Patricia churned out a defense that finished strong (17.7 PPG allowed in the final six games of the season).

However, in the playoffs the Patriots defense was torched, allowing Matt Schaub and Joe Flacco to combine for five touchdowns, one interception and a passer rating of 97.1.

This was a remarkably healthy year for the Patriots on defense. Aside from cornerback Will Allen—who missed the entire season—New England didn’t have any serious injuries to their starting corps on defense. Their low Ranking is likely due to some key offensive injuries (Julian Edelman, Rob Gronkowski, Donte’ Stallworth).

Seeing their defensive roster grow older and older, the Patriots went defensive-heavy during the draft again in 2013. Three of their first four picks were spent on defense, including linebacker Jamie Collins and cornerback Logan Ryan.

The resulting year was a rough one on defense. Though they actually ranked ninth in passer rating allowed (81.0), New England allowed 4.5 yards per carry (t-24th) and 5.3 yards per play (16th).

The defense particularly struggled down the stretch off the season, allowing 20+ points in six of their final seven games of the season, including over 30 twice. However, the defense rebounded in the playoff, holding Andrew Luck and Peyton Manning to just four touchdowns and four interceptions combined. Still, the Patriots fell in the conference championship again.

The Patriots were not as lucky in the injury department this year. Starting linebacker Jerod Mayo missed the final 10 games of the season, Aqib Talib missed three games with a lingering hip issue, Vince Wilfork only played in four games before he tore his Achilles and starting DT Tommy Kelly missed the final 11 games with a knee injury.

In 2014, the Patriots would jump back into the top half of the league in all defensive categories, and it was truly a team effort. No individual finished with more than two interceptions or 8.0 sacks.

They needed some team effort because they lost Aqib Talib, Brandon Spikes and Dane Fletcher to free agency before the season—though they did gain Darrelle Revis.

Thanks to an impressive secondary (Darrelle Revis, Devin McCourty, Patrick Chung), New England only allowed 59.6 percent of passes to be completed (eighth) for a passer rating of 84.0 (10th).

As a result, the Patriots won the Super Bowl. Along the way, they held the Andrew Luck-led Colts to just seven points.

This was a much better year for the Patriots regarding injuries. Starting defensive end Chandler Jones did miss six games in the middle of the season and Jerod Mayo was placed on IR after six games, but otherwise, the Patriots remained fairly healthy throughout the year.

It was another big shift in defensive personnel in 2015. The Patriots lost Akeem Ayers, Brandon Browner, Darrelle Revis and Vince Wilfork in the offseason. To offset the loss, New England, again, injected the roster with a class of defensive rookies. DT Malcom Brown, S Jordan Richards, DE Geneo Grissom and DE Trey Flowers were the team’s first four picks in the 2015 NFL Draft.

As a result, the Patriots had arguably Patricia’s best year as defensive coordinator, leading New England to yet another conference championship defeat. However, it’s hard to blame the defense for that. They only allowed 20 points in each playoff game, and in their loss to the Denver Broncos, New England allowed just 244 yards of offense in total.

Rookie Trey Flowers only played in a single game and was placed on IR halfway through the season. Defensive tackle Chris Jones missed the entire year with a calf injury, but it wasn’t too bad for New England otherwise.

The Patriots allowed the fewest points in the league thanks to one of the best run defenses in the league and an outstanding unit. Dont’a Hightower, Malcolm Butler and Devin McCourty were all named All Pros as New England won another Super Bowl. They also replaced retired Jerod Mayo with [/cleans his glasses] Kyle Van Noy.

Again, we saw a clear improvement as the season went on. After allowing an average of 16.5 points and 354.1 yards per game through the first eight, the Patrios only allowed 14.75 points and 298.8 yards per game in their final eight.

As suggested by the DVOA rankings, this defense was led by their ability to stop the run. They allowed just 3.9 YPC (eighth) and ceded only five rushing touchdowns all year (first). But they weren’t too shabby against the pass, either, allowing a passer rating of just 84.4 (eighth) and just 6.8 yards per attempt (t-seventh).

The Patriots defense was the healthiest in the league in 2016 and it obviously paid off. Seven of their 11 starters played in at least 13 games that season.

There’s no way around it. The beginning of the 2017 season was an defensive disaster for the Patriots. Through six weeks of the season, The Ringer’s Rodger Sherman penned an article called “The Patriots Pass Defense is Bad at Everything.” Here’s a particularly damning excerpt:

The Patriots have been worst in the NFL in total yardage allowed (2,644), yards per play allowed (6.6), first downs allowed (146), passing yardage allowed (1,949, nearly 200 worse than the 31st-ranked Colts team), and adjusted yards per attempt allowed (8.9). They are 30th of 32 in points allowed per game (26.5), and that’s with the help of a few timely turnovers. New England is among the worst teams in the league in sack percentage (24th), opposing completion percentage (27th), and opposing third-down conversion percentage (26th). The 42 points allowed against the Chiefs in Week 1 were the most the Pats have given up in a game this millennium.

But as you probably know by now, things have drastically changed since then. In fact, Sherman wrote an article two months later describing the huge turnaround. Here are some particularly enlightening stats from Week 5 to Week 13:

The Patriots have won eight in a row, and, in that stretch, the defense has given up just 11.8 points per game—best of any team in the league. New England’s allowed just eight pass touchdowns (tied for sixth best) in those eight wins and held opposing passers to a 75.4 passer rating (seventh).

Though the Patriots’ DVOA ranking is still second-worst, their weighted DVOA—which gives more importance to more recent games—is 22nd. That’s far from dominant, but shows a clear improvement as the season went on.

And what’s the reason for the turnaround? Well, it certainly isn’t a matter of getting healthier. Football Outsiders doesn’t have adjusted games lost calculated yet, but New England lost Dont’a Hightower for the season after seven games. Defensive end Derek Rivers missed his entire rookie season. Vany Noy missed a handful of games down the stretch, cornerback Eric Rowe missed half the season, and DE Shea McClellin never came back from IR.

So, you have to give credit for Patricia for turning around one of the worst in the league. Sure, he deserves just as much ridicule for such a horrific start, but given the depleted roster, that makes the turnaround all the more impressive.

But what about their offense?

Defensive statistical output is highly dependent on the offense. Just think about it. If the offense is continually going three-and-out or turning the ball over, it puts the defense in bad situations. It gives them poor field position and tires out the defense.

It should come as no surprise that the Patriots offense has done just about everything they can to help out their defense. Here’s how the Patriots have ranked in offensive turnovers each year:

And how has that manifested itself for the defense? Check out where they rank in starting field position, according to Football Outsiders’ drive stats:

So there’s no doubt that the Patriots defense was helped drastically by their own offense, explaining some of the difference between the points per game stats, yards per game and DVOA statistics.

The Patriots are known for their “next man up” mantra, and therefore rarely rely on single superstar who clog up cap space. They have no problem trading away a guy like Jamie Collins or letting some of their best players (Revis, Talib) hit free agency.

Why? Because the rest of the team is so well-coached. Check this out:

That’s it. This isn’t a team of superstars. This is a team full of well-coached, well-schemed players that churn out an above-average defense more often than not. The Lions have had as many All Pros (Darius Slay, Ndamukong Suh) and more Pro Bowl defenders (Slay, Suh, Ezekiel Ansah, Glover Quin) than the Patriots since 2012

And essentially that’s what this all boils down to. Has Matt Patricia led the league’s best defense during his tenure? No, far from it, in fact. But it’s hard to find a defensive coordinator who has done more with less.