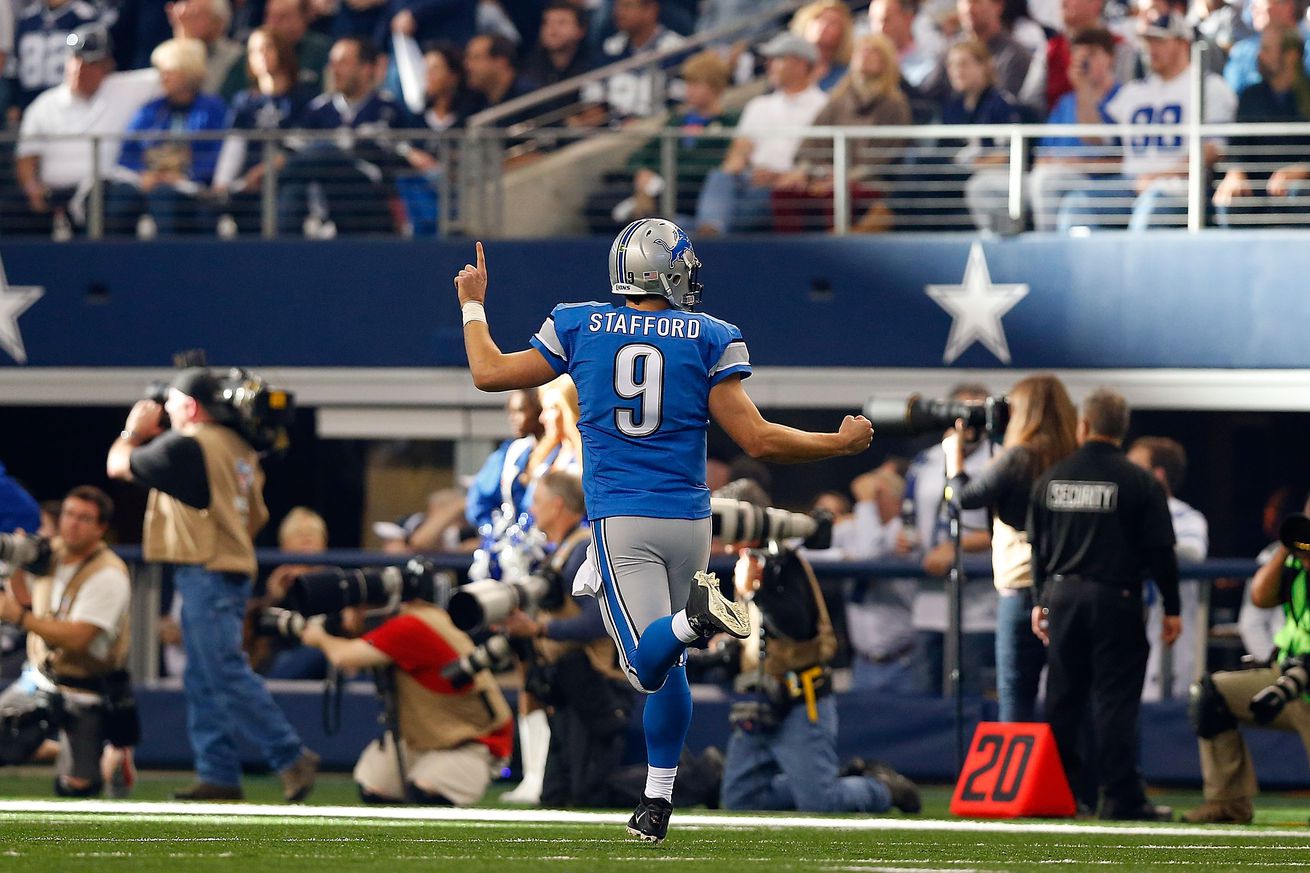 How do the Lions and Cowboys match up? Here’s our preview and prediction for Monday night.

After last week’s loss to the New York Giants, the Detroit Lions find themselves in a situation in which they likely need to win at least one more game to clinch a playoff spot. Unfortunately, the road ahead isn’t an easy one. With a huge showdown looming in Week 17, the Lions first need to get through the first place Dallas Cowboys on “Monday Night Football.”

This game has been complicated by the fact that the Cowboys have now clinched the first seed in the conference and have nothing to play for, but since the team is saying they will play full strength, let’s take their word for it and break down the matchup as normal. 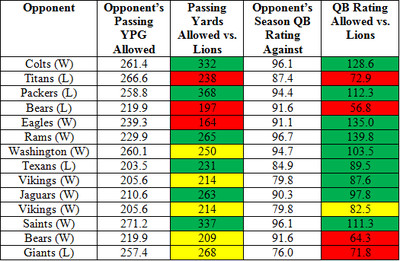 The Lions pass offense has taken a step back in the past two weeks. There are several theories as to why this has happened: The absence of center Travis Swanson, Matthew Stafford and his injured finger or simply just running into two very good defenses. The truth is probably a combination of the first and last options. Stafford has looked fine, and even thrown pretty well, but Detroit has had trouble putting the ball into the endzone and the raw statistics show it.

Overall, still, the Lions are playing at a high level when throwing the ball. They rank ninth in passer rating (95.8), t-12th in yards per attempt (7.3) and eighth in completion percentage (66.3).

Though Stafford has thrown three interceptions in the past two weeks, he has still only thrown eight on the season and is still playing at his best. Unfortunately, it looks like he could still be without his starting center this week, as Swanson already missed one practice. In addition to Swanson, the Lions passing offense may be without their No. 1 receiving option out of the backfield, Theo Riddick, who continues to mend an injured wrist. 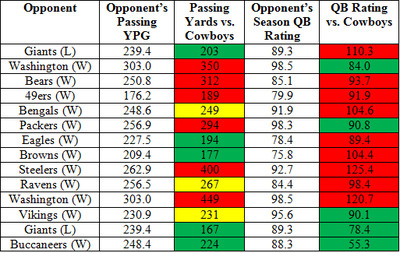 The Dallas Cowboys had one of the worst passing defenses in the league over their few months. Nine of their first 11 opponents were able to surpass their average passer rating against the Cowboys. However, in the past three weeks, the Cowboys defense has tightened up and given opposing quarterbacks hell, holding all three well below their passer rating average.

There doesn’t seem to be one simple reason for this improvement, but the Cowboys are getting some pass rush now from guys like David Irving. They also have playmakers across their defense, including linebacker Sean Lee.

However, this is still a vulnerable unit despite their recent success. They rank just 27th in passer rating allowed (96.7), t-14th in yards per attempt (7.1), and 31st in completion percentage allowed. Statistically speaking, they are very similar to the Lions’ pass defense, which has been much maligned all year.

Player to watch: Golden Tate. Since Riddick’s injury, Tate has been the centerpiece to the Lions’ passing offense, hauling in 325 yards in his past three games. If Riddick can’t go again, expect Tate to get the bulk of targets yet again.

Advantage: Lions +1.5. Detroit would have a bigger advantage here if it weren’t for the current trends of both units. The Lions’ struggles on offense may just be a mirage due to playing decent defenses, but it’s concerning nonetheless. As for the Cowboys, they’ve managed to shut down there mediocre offenses in as many weeks. This will present a new challenge for Dallas and a new opportunity for the Lions offense. Detroit should look more like themselves this week. 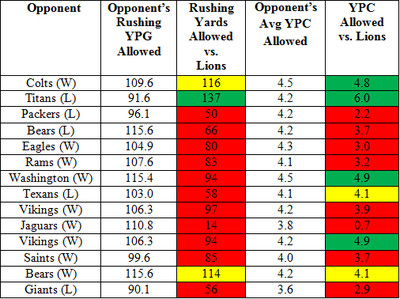 I think it is now official: the Lions’ running offense is now the worst unit on the team. Since Ameer Abdullah’s injury in Week 2, the Lions have not been able to gather anything resembling a running game and it only seems to be getting worse. Neither Dwayne Washington nor Zach Zenner were ever supposed to become feature backs under this offense, but injuries have forced the Lions’ hands and the offense has suffered because of it. For the past two weeks, they’ve also had to deal with the aforementioned injury to their center and the results have not been pretty.

Overall, Detroit undeniably sports one of the worst rushing attacks in the league. They average just 3.7 yards per carry (27th) and earn first downs on only 20.7 percent of carries (24th). They’ve only surpassed a defense’s YPC allowed average four times all season, and just once in the past seven games. 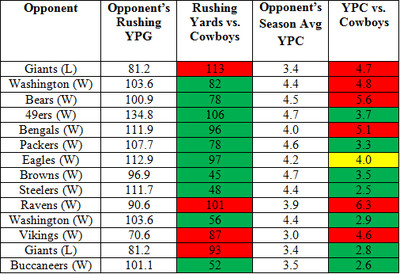 This isn’t a great Cowboys defense, but they defend the run much better than they defend the pass. They have held eight of their 14 opponents below their YPC average, and four of those were held under 3.0 YPC. The yardage totals are a bit misleading, because Dallas is typically playing with a lead and opponents often abandon the run against them. In fact, the Cowboys have faced the fewest rushing attempts of all teams in the NFL.

Still, the efficiency statistics of this run defense are impressive. They’re allowing just 3.9 YPC (t-ninth) and just 22.1 percent of rushes earn first downs against this Dallas defense (t-11th). They aren’t quite as outstanding as their chart suggests, but they are an above average unit.

Player to watch: Sean Lee. Lee landed on several Pro Bowl snubs lists, and for good reason. The Cowboys linebacker leads the team with 140 tackles and 13 tackles for loss, which place him second and 10th in the league respectively.

Advantage: Cowboys +1.5. The Lions will try to stubbornly run the ball every week, and that won’t change against the Cowboys. However, I don’t see how the Lions come away with any sort of success on the ground. Dallas is too sound of a tackling defense and Detroit is just struggling without the likes of Swanson and Riddick. 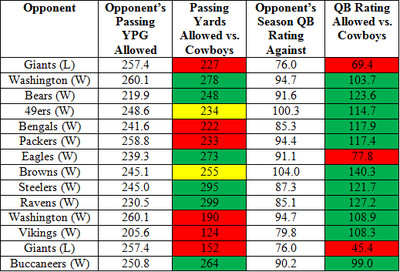 The Cowboys’ pass offense is a tough nut to crack. Obviously rookie Dak Prescott is playing at a level that no one expected in his rookie year, but he has also had the help of a great offensive line and an even better running game. Still, the numbers are hard to deny. Dallas has finished with an above average passer rating in 11 of 14 games and in 10 of those, Prescott finished with a passer rating over 100. But while the efficiency numbers are incredibly high, the raw numbers are just okay. Dallas hasn’t had to rely on the passing game much, which is why the Cowboys have the fourth fewest passing attempts in the league (30.9 attempts per game).

Regardless, On Paper tends to value the efficiency statistics more than things like yardage totals, and the Cowboys are wildly impressive in efficiency. They rank fourth in passer rating (103.0), yards per attempt (7.9) and completion percentage (67.7). Dallas has also allowed just 24 sacks on the year, the eighth-fewest in the league. No matter the reasoning, the Cowboys passing offense has been an efficient machine. 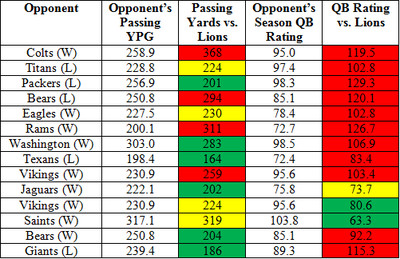 Unfortunately for the Lions pass defense, they have allowed nearly every quarterback they have faced to look just as efficient. After two back-to-back games in which Detroit’s defense finally looked ‘fixed’, the Lions have fallen back on allowing an extremely high percentage of completions and making very few plays in the secondary.

Overall, the numbers are quite awful. Detroit is 31st in passer rating allowed (102.1), t-20th in yards per attempt (7.4) and 32nd in passer rating (72.8). If there’s one thing the Lions do well though, it is preventing long plays. They’ve allowed just 42 plays of 20+ yards (t-12th) and six of 40+ yards (t-sixth). This defense makes their opponents methodically drive down the field and earn every yard. Though opposing offenses usually have little trouble doing exactly that.

Player to watch: Nevin Lawson. All signs point to Darius Slay missing this week due to a hamstring injury, which means Lawson will be promoted to the No. 1 cornerback position. He’ll likely draw a lot of Dez Bryant—who is dealing with a minor back issue of his own. Lawson has played decently as of late, but Bryant will be a tough assignment.

Advantage: Cowboys +2. With a beat up secondary and no pass rush, it’s hard to see a way the Lions win this matchup. If anyone can save the Lions defense here, it will be their safeties, who have combined for seven of the team’s 10 interceptions. But considering how safe Prescott has been with the ball—just four interceptions all year—Detroit doesn’t seem to have much of a chance here. 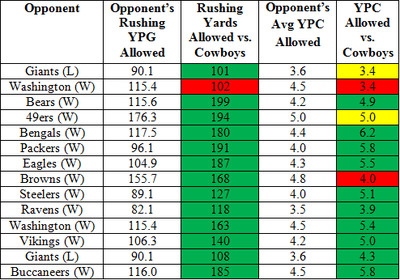 Here are where things go from bad to worse for the Lions. The Cowboys running game has been a marvel to watch. Rookie Ezekiel Elliott has all but wrapped up Offensive Rookie of the Year honors, and is now eyeing potential a run at MVP. When you look at this chart, you can easily see why. As a team, the Cowboys have hit 100 yards in every single game this season, and have rushed for at least 4.0 yards per carry in 11 of their past 12 games. They aren’t just surpassing defensive YPC averages, they’re blowing them out.

The Cowboys rank second in YPC (4.8) and second in percentage of carries that earn first downs (29.5). They can hit you with the explosive plays (15 rushes of 20+ yards, third-most) and they can pound it in at the goal line (22 rushing TDS, second-most). Elliott is a complete back and there are no signs of him slowing. 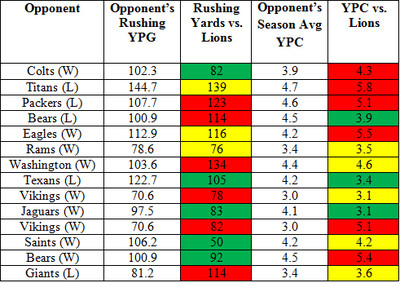 The Lions run defense has not been horrible, but they’re certainly a below average unit. They’ve only held three opponents significantly below their YPC average, though an additional five opponents have only met those averages.

Detroit has enjoyed improved linebacker play since DeAndre Levy rejoined the lineup, but it hasn’t shown up much on the stat sheet. The Lions are still ceding 4.2 YPC (t-16th) and 25.6 percent of rushes are earning first downs against this defense (29th).

Advantage: Cowboys +3. This is the best unit the Lions will face in any facet of the game this entire season. No defense has been able to slow Elliott down this year and there’s no reason to believe Detroit could do something that hasn’t been done since Week 2. This Cowboys offensive line has been dominant all year, while the Lions’ defensive line has vastly underperformed. This could get ugly.

On Paper is now on a winning streak, having correctly predicted two games in a row. Last week’s prediction of 17-16 was pretty spot on, if I had just not included one of those ones. In the comment section, you’ll never believe who won. Chris Lemieux’s prediction of 4π-5 Giants was the closest to the final score. Chris, who has made predictions of 69-66, 9-5, 32-29 in the past, has now managed to win this dumb contest twice this year.

And you know what? I will not stand for Lemieux making a traveshamockery out of this contest. You know what, Chris. You get no prize. Come at me, @AdequateHost.

The Cowboys come out with a significant +5 advantage, one of the biggest edges in On Paper this season. There just isn’t much of a question that the Cowboys are a better team statistically, no matter how you cut it up.

But this is a funny Lions team. Give them an edge in the passing game and anything can happen. Throw in the fact that the Cowboys have nothing to play for, and you can throw predictions out of the window for Monday. That being said, this column is all about trying to obtain objectivity, and the Cowboys are objectively a better, more well-rounded team than the Lions. If the Cowboys come out swinging on Monday night, things could get ugly. Cowboys 27, Lions 17.