There are Class Modules on Forms and Reports.  Almost all Controls on Form, like Command Buttons, Text Boxes, Combo Boxes, List Boxes and others  have Event s Coding features that makes Ms-Access a powerful Database Management System.

Text Box have GotFocus, LostFocus, BeforeUpdate, AfterUpdate  and other Events and we write VBA Code in them to do various tasks, like data entry control, validation checks or calculations on entered data and so on.

The OnClick Event Procedure of Command Button launches Forms or Reports or Run programs or Macros to do various tasks.  In all these predefined Events we write code directly on the Form’s or Report’s Class Module.

But, we are going to do it differently this time by redirecting the Event handling somewhere else other than the Event invoking Class Module.

As far as Ms-Access is concerned we can divide this procedures into two sections:

First we will start, with the second option, defining Custom Events and will learn as how to invoke a Custom Event from one Form and capture it on another Form or in a Class Module Object, as it happens and run the required task there.

Why we take the Custom Events first, because it uses all the fundamental elements of this  powerful programming feature.  It uses few basic statements (given below) and their placement on different Modules and the correct naming of Events on the Source and Target Modules are very important.

We will be trying out a simple example, but it is very important that you understand the key elements placement of Custom Event and how all of them are synchronized to work together.

Capturing the built-in Events, like Button Clicks, Combo Box Clicks etc in Class Module object is much more simpler than to define Custom Event on one Class Module and capture it from another Class Module.

Let us try an example with two simple Forms, with a Text Box and a Command Button.  With this trial run I am sure that you will know the basics of this procedure. The sample design of Form1 is given below: 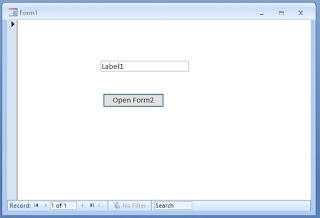 Let us take a closer look at the Form1’s Class Module Code.

Now let us go through the Form2 Module’s Code.

What happens on form2 and Form1, the chain of action path is depicted in a diagram given below. You may use it as a guide when you try out something on your own ideas. 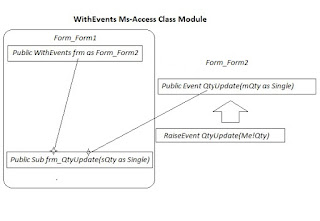 The global declaration Public WithEvents frm as Form_Form2 on Form1’s VBA Module is like a Radio Receiver, states that whatever action transmitted from Form2 (from instance frm Variable) will be received in Form1 and executed.

In Form2’s Module at the global declaration section you will find the statement Public Event QtyUpdate(mQty As Single) , you may compare this statement with the transmission Frequency (or Event Name: QtyUpdate()) with data, from Text Box as parameter.

The transmission takes place only when you call the RaiseEvent Statement and it fires the Event declared at the Module level of Class or Form or Report, with parameter value (if defined), like RaiseEvent QtyUpdate(Me!Qty).

The same name QtyUpdate() is a Subroutine Name – not to declare as Function  - (on Form1 Class Module, like we tune in to the same transmission frequency to receive the radio broadcast) where we write code to run validation check on the passed data as Parameter and displays a message based on the validity of value passed from Qty textbox on Form2.

The Sub-routine name is always prefixed with Form2’s Class Module instance variable name frm_  and the sub-routine header line is written as Private Sub frm_QtyUpdate(sQty As Single), to tune into the correct frequency of transmission.

Note: It means that the actual Code, for the Event Procedure declaration done on Form2 Class Module, is written on Form1 Module, by addressing the subroutine directly with object name (frm_) prefix.

Armed with the above background information let us try out the Forms to see how it works.

The formClose() Event is fired, a message is displayed. The Label control Caption on Form1 is updated with the same message stating that Form2 is closed.

I am sure you understood as how the whole thing works and try something similar on your own way.  When on doubt use this as a reference point.

More on this next week.