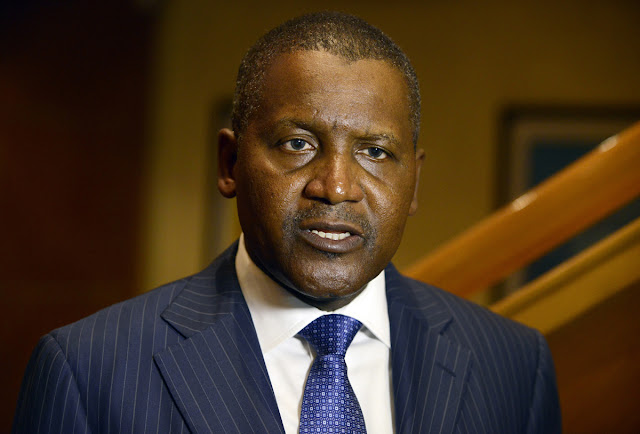 The current recession rocking the Nigerian economy has hit one of the biggest employers of labour in the country outside of the government as the Dangote Group, belonging to Africa’s richest man, Aliko Dangote, has fired 48 members of staff.

Punch gathered that those sacked were made up of 36 expatriate and 12 Nigerian workers from the group’s headquarters and one of the subsidiaries, Dangote Cement Plc.
It was further gathered that the huge amounts in foreign currencies being paid to the expatriate workers had become a burden on Dangote due to the steady depreciation in the value of the naira and the difficulties of raising enough dollars.

For the affected Nigerians, it was gathered that most of them had disciplinary issues, which made it easy for the group to do away with their services.

However, in a letter titled: ‘Recent Retirement Exercise’,  signed by the President/Chief Executive Officer, Dangote Group, Aliko Dangote, dated Thursday, October 20, 2016,read in part,
“This year has been a very challenging year for us as a business. The unavailability of foreign exchange coupled with an unprecedented hike in the exchange rate has resulted in increased costs across the organisation.

“This called for a proper review and adjustment of our costs across board to ensure efficiency and effectiveness in the deployment of our factors of production in a bid to eliminate redundancies that we know exist, which resulted in some tough decisions, which means losing staff, including some of our colleagues.

Who is Ted Boehly, the American billi…
Pass the CAPM exam on your first try …
Formaldehyde
CannaHealth Founder Kebra Smith-Bolde…
Buhari challenges citizens to expose …
“On Friday, October 14, 2016, we began the process of staff cutbacks as it is imperative to review our human capital deployment for the required cutbacks that would ensure eficiency and eliminate redundancies in the allocation of human resources.“This first phase of this exercise involved the cutback of 36 expatriate staff across the Dangote Cement Plc and Dangote Industries Limited, and 12 local staff members in Dangote Industries Limited.”