To round out the year, this is an update of a post from January 2019, now that the Democratic presidential field has been winnowed, and occasionally added to.

As with the original? 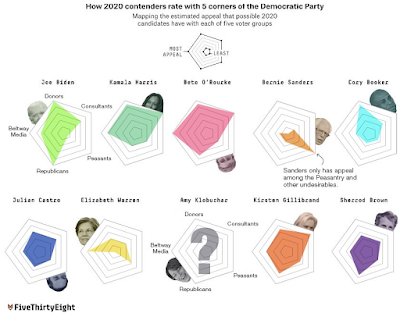 First, I'll give you oddsmaking.

Second, I'll give you his or her likely target audience.

Third, as a Green-leaner, I'll give a letter grade based on my take on the acceptability of their political stances and related issues.

Note: Odds may go over 100 percent total because they would change in reality with candidates dropping out, etc.

Note 2: I have written in-depth takes on selected candidates and will do more in the future. Where available, they're linked.

Note 3: A candidate's name in red means they've officially entered the race. A strike-through means they're officially out. (As noted, I've already winnowed from the original.)

And, since he liked mine, Gaius at Down with Tyranny also has a ratings/oddsmaking.

(June 29, 2019: Here's my take on winners and losers from the first pair of Democratic debates.)

(Note: On people with perceived higher odds, I'll give more of a breakout. At least as much as for Julian in the paragraph above.) And so, in no particular further order ...

Joe Biden: Odds 18 percent. (Don't overestimate those early Iowa polls.) Biden has the pluses of being a better establishmentarian candidate than Hillary Clinton and ties to the Obama coattails, and may be seen as more progressive than is actually true. With both her and Bloomberg out, too, he's the only "establishmentarian" heavy hitter left. Minuses are being almost as old as Bernie Sanders, being gaffe-prone, being Sen-MBNA on bankruptcy tightening 15 years ago, and lots of #MeToo baggage beginning with but not limited to the Clarence Thomas confirmation hearings. Since the start of the run, he's looked more and more memory-befuddled. Plus, the impeachment process has brought his family baggage into the light. Target: DNC establishment and DNC superdelegates if a brokered convention happens. Like factor: D-minus.

Cory Booker: Odds 8 percent. Has pluses of being a minority. Has baggage of footsie with Big Pharma, of many "poseur" stances (he's a weathervane in a field filled with them), and lack of a Senate legislation paper trail for his length of time in office. Target: Slightly more conservative Kamala Harris voters. How much her dropping out will boost him remains to be seen. Could be an acceptable establishment alternative if Biden slips more. Like factor: D-minus, but perhaps moved up to a straight D.

Bernie Sanders: Odds: 22 percent. Pluses include previous campaign history, plus him moving slightly leftward again on foreign policy. (Let's see how Palestinian issues continue to play out, and if he keeps schwaffling on Venezuela.) Minuses include the downside of previous campaign history, plus no "Hillary voted for Iraq and spoke to Goldman Sachs" easy campaign targets. Minuses from a Green POV include that he's still way too much of a military Keynesian. Additional baggage of age. See my posts about him and F-35s. Additional baggage for some Dems of being a white male.  (The male part is coming into play on some of his Congressional endorsements, and questions about them.)  Other minuses (not for him, but his campaign) include becoming ever more a target of the Dem establishment and establishment media, even with antisemitic smears similar to those against Corbyn. Like factor: B-minus. (I'm not grading on a curve, but you can compare his grade with other Dems.) That said, he IS a Dem. See this new piece. Or click the Bernie tag below.

Michael Bloomberg: Odds: 3 percent. (This odds is as a Democrat only; I in no way rule out him making an independent run in the general election — even if he's chided Howard Schultz for thinking of that.) Political, if not real, pluses include perceived liberalism, especially on climate and environment through things such as the soda tax, claims to appeal to centrist independents in general election. Minuses include bankster background and everything related. Target: Democratic establishment. Like factor? Hell,. F. It was an F originally, and his entering the race after all only makes this worse.

Elizabeth Warren: Odds 18 percent. Pluses? A woman in the MeToo era, perceived as liberal to left-liberal economically. Minuses include her Cherokee Nation baggage, that she's not as liberal on as many things as believed and that she's anti-BDS. Also, per her "I'm having a beer" NYE Instagram video, a too-transparent sense of earnestness, possibly coupled with a too-transparent sense of pandering to Millennials with that as an Instagram rather than Facebook video. Additional minus is that she reportedly has hired comms staff from Hillary 2016. Politically unastute plus they were hacks. Like factor? C-minus, and I am amending an earlier statement. I am partially grading on the curve; otherwise, she might be lower. Thanks to Daily Wire or whoever gave that graphic to somebody connected to Trump, who then Tweeted it.

John Delaney: Odds: Less than Julian Castro. Pluses besides being first to file? None. Minusus? Bland older white guy from exurban Congressional district. Plus/minus: Looks like a bald, blander Will Ferrell. Target: Cabinet position in next Dem presidency and staying in longer than Julian Castro. Like factor: Not even registered. But, the fact that he's worth at least $92M is registered.

Tulsi Gabbard: Odds: 1 percent. Political pluses (note that caveat) include Sanders connections, especially if he does not run, a Kool-Aid stronger than Beto's, perhaps, and definite support from people like H.A. Goodman who haven't done the full Bernie-to-Trump but are definitely the conservative faction of BernieBros. General pluses are willingness to take on Dem establishment. Minuses are basically everything I've said above under political pluses plus the fact she still, Kool-Aid drinkers aside, appears to back Islamophobia, and that she's as much a political re-inventor as Trump. That's all true, and I've blogged about her Hindu nationalist fascist bromance three full years ago, and now, like Beto, about her Kool-Aid drinkers plus Kool-Aid brewer Michael Tracey. Targets: The conservative portion of the Sanders movement. Like factor: D. Dropped from D-plus due to the cultic level of her backers.

Andrew Yang: Odds: 6 percent. Political pluses include enthusiasm of his groupies. However, that becomes a minus when they often become cult-like TulsiTwerker type folks. More serious pluses? Basic Income focus (and a version that at least seems to be non-libertarian) indicates he thinks outside some boxes. But, on Israel and Zionism, he remains firmly inside the current Doink foreign policy box; also, his health care ideas look more like Warren than Sanders. Target? Millennials. Like factor? C-minus.

Amy Klobuchar: Odds: 3 percent. Pluses? Lemme think. Minuses would be being behind two or three other women senators and being older than two of them, as well as being seen as less progressive than all three. Target: Hillary Clinton backers who wouldn't vote for one of those other women, along with masochistic lower-level white collar employees who love sadistic bosses. Like factor: D-minus.

Marianne Williamson: Odds: Not a ghost of a chance or even a New Agey ghost of a chance. (I'd forgotten that there had been noises about her until she was mentioned on someone else's blog. But she even has an exploratory committee and website.) Pluses: Not a politician. She has, though, made extensive donations, mainly to progressive Dems but also to ConservaDems like Jon Ossoff and Doug Jones. "Peace" imagery. Minuses: All her baggage as a New Age nutter. Target audience: People who think "A Course in Miracles" is real. Like factor: Probably on the non-New Agey angle, a B-minus; including it, a D-minus. Her campaign contributions do NOT include the Green Party, but do include the Natural Law Party. Nuff ced. My full take is now up.

Michael Bennett: Odds: Less than Julian Castro. John Hickenlooper with another name and without fracking oil directly on his hands. Target? You fucking got me, other than his own vanity. Like factor? No more, no less than any other milquetoast centrist neoliberal, so, D?

Deval Patrick: Odds: About the same as Obama actually getting the 22nd Amendment overturned. Gov. "Obama's Third Term" is making bland noises about separating himself from Democrats' recent past, but of course doesn't mean it. Target? People who wish Obama could run for a third term. Like factor? Same D as many candidates here.

Tom Steyer: Odds: About half of Bloomberg's. Likeability factor? About twice Bloomberg's, if that's not damning with faint praise. More serious about climate change than any other Dem. That includes Bernie, who I don't think really gets it, and Liz, who of course "has a plan for that." Target? Environmentalists. Like factor? C-minus.

Pete the Budgie, aka Mayo Pete, aka Mary Pete (suck it, certain subtypes) otherwise known as Pete Buttigieg: Odds: The same exact percentage of Julian Castro's odds as South Bend's population is of San Antonio's. That was my assessment when he first entered. Now? 9 percent. Target audience: The future Dem president who gives him a Cabinet seat/Indiana Dem Senate voters. Like factor: F, dropped from original; worked for management vulture McKinsey for three years, for doorknob's sake, and more and more leaks. His claiming that South Carolina black leaders support his was odious. Has zero real accomplishments at South Bend and embroiled city in racial issues. No, seriously. Wikipedia. Here's more reasons, with a blog post written just to "out" Beto-Lite, why you shouldn't vote for him.

As with the original, when candidates drop out, I'll strike through their names.

Finally, with Dem changes on superdelegates, is there some chance of a brokered convention? Yes, but not much Put it at 5 percent; note how wide open the GOP race was in 2016 but how much it converged well before the last round of primaries.

No, more finally. What about the Republicans?

Well, Bill Weld has now formed an exploratory committee and since then, officially entered the race. Since then, largely unrepentant wingnut Joe Walsh, who is now simply a Never Trumper Past Today wingnut, has also entered. Former SC governor Mark Sanford entered for all of what, two weeks, then wandered back down the Appalachian Trail.

Odds? Weld 4 percent. Walsh 1 percent.
There is no god and I am his prophet. - SocraticGadfly