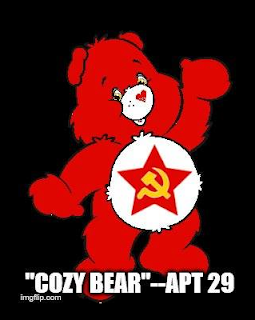 First, it's "interesting" that President Barack Obama's new sanctions against Russia were launched oh, about an hour after a new cease-fire in Syria was announced — a cease-fire mediated by Russia and Turkey alone, not the US, which was deliberately cut out.

I find it more interesting that, reading between the lines, a Russian spy house an hour or so away from the White House suddenly and massively hit a new level of spookery after the Russkies have been there for 44 years.

It's also funny that Russian President Vladimir Putin punked Obama by not retaliating in kind.

Second, that they're little more than a list of protections needed against malware, or otherwise, a group of vague warnings pinnable to nothing.

In light of that, one should read Jeffery Carr calling other work by national security consultant CrowdStrike "a work of fiction." (And, stand by for his details on that.)

Or, let's go back six months, to when the natsec establishment was throwing #IBlamePutin bullshit at the wall to first see if it might stick.

The metadata in the leaked documents are perhaps most revealing: one dumped document was modified using Russian language settings, by a user named “(Felix Dzerzhinsky),” a code name referring to the founder of the Soviet Secret Police

OK. Raise your hand if you think that a GRU or FSB officer would add Iron Felix’s name to the metadata of a stolen document before he released it to the world while pretending to be a Romanian hacker. Someone clearly had a wicked sense of humor.

That, in turn, the Carr piece, is referenced by a brand-new longform at Harper's, from Andrew Cockburn, one of the better pieces out there about the rise of a new McCarthyism.

#FollowTheMoney, if you want another hashtag. Carr also addresses this issue. (He also seems to reference people who think Robert M. Lee knows a lot more shite than him.) I can't believe that people out there are smart enough to not think about this — people who are generally smart, and not normally apologists for the natsec spinoff of the military-industrial complex. But, I guess I need to start believing.

Fourth, as I've said before, Hillary Clinton was not hated to death by Vladimir Putin. Google "Frank Giustra" plus "uranium" plus "Clinton Foundation" if you don't believe me. In fact, this NYT piece should be your top Google hit.

Fifth, and related, just because Trump is allegedly a sucker for flattery doesn't make him "controllable," even if all the allegations are totally true. It just makes him an unstable, mercurial, sucker for flattery with the flattery's effect being short-term only, because of that.

Putin might well value the stability and experience of a Hillary Clinton over that.

But, she's a warhawk!

And, Putin might use that as flypaper, if she had been elected and really had tried to put a no-fly zone over Syria into effect. Even more so now that Turkey and Russia are current BFEs.

Sixth, but Julian Assange is a Russian agent, right?

Well, first, let's set aside the MSM's repeated attempts to smear him, including the Guardian, one of his earlier collaborators.

Is it possible that, in some areas, Assange has been a kind of a fellow traveler? Yes. (And Glenn Greenwald should be more suspicious of that.) That doesn't make him a Russian agent, or even an implacable foe of US interests. After all, Wikileaks' dump of Syria leaks was largely anti-Bashar Assad, just like the US government is.

Seventh, speaking of, the natsec eggs and their MSM mouthpieces have been dead wrong about Russia before, in this case, specifically, Russia and Syria.

Eighth, speaking of MSM mouthpieces, one, the Washington Post, or at least its owner, has a $600 million conflict of interest vis-a-vis the CIA.

Summary: As of right now, this is a thin, runny stream of crap held between sheets of one-ply toilet paper. Click those links, purge your brain of what the MSM and the government has been feeding you, and you might learn some new stuff.
There is no god and I am his prophet. - SocraticGadfly