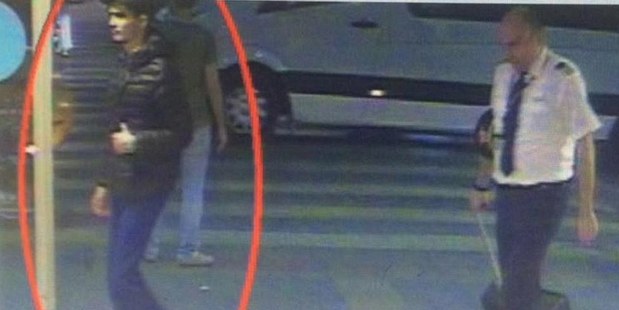 CCTV footage shows one of the men believed to be one of the bombers walking into the airport terminal alongside a pilot.
The three suicide bombers who attacked Istanbul's Ataturk Airport have been identified as nationals from Russia, Uzbekistan and Kyrgyzstan, a senior Turkish official said.
Turkish authorities did not release the names of the attackers, who staged a triple suicide bombing at Turkey's biggest airport on Wednesday, killing 43 people and wounding more than 230.
The identities exposed possible connections between Islamic State cells and Turkey's large communities of workers and others from the Central Asia region. There has been no claim of responsibility for the attack, but Turkish officials have said they believe the Islamic State is behind the bloodshed.
Even as the country reeled from the violence, the assault on one of the world's busiest airports - and a symbol of Turkey's modern economy - threatened to propel the country into a wider war with the jihadists.
Turkish police staged raids in at least two cities, detaining at least 13 suspects in connection with the attacks.
Counterterrorism units raided 16 addresses in Istanbul and launched operations in the coastal city of Izmir, according to Turkish officials and the state-run Anadolu news agency.
Three of those arrested in Istanbul are foreign nationals. Another nine suspects were detained in Izmir for providing logistical support to the Islamic State, but it was unclear if they are directly tied to the attack.
But Turkish Prime Minister Binali Yildirim said in a televised speech Thursday that the government's assertion that the Islamic State is responsible "continues to gain weight." 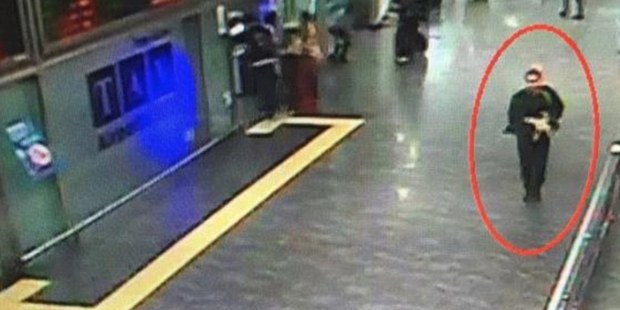 A second suicide bomber can be seen making his way through the terminal with what appears to be a gun.

Endocannabinoid System | How Importa…
After Naveen Patnaik, KCR extends loc…
Cat Coronavirus Diary – Day 8
Mediterranean Interior Design
Can CBD Be Used to Fight Coronavirus …
Turkey's Interior Minister Efkan Ala also said there was no conclusive evidence, but early reports suggested the Sunni extremists were behind the bloodshed.
"Every connection is being evaluated carefully," the Associated Press quoted Ala as saying.
Two people injured in the attack later died, raising the death toll to 43, officials said. More than 230 people were injured.
On Thursday, a senior Turkish official gave a timeline of the attack: First, a militant detonated explosives in the arrivals area on the ground floor of the international terminal. A second attacker exploded a bomb minutes later in the departures area upstairs. Finally, a third bomber detonated explosives in the parking area amid the chaos as people fled to escape the attacks inside.
It was unclear at what point security forces exchanged gunfire with the attackers, according to the official's timeline. But witnesses spoke of scenes of panic, fear and wounded fellow travelers.
"It was chaos. No one was in charge," said Faisal Rashid, a 15-year-old who was travelling with his family from Sweden to Iraq, where they are originally from. "We just ran, all of us, outside. We didn't know what we were doing - we just thought we could die."
The airport handles more than 60 million passengers each year and is a hub for Turkey's official carrier, Turkish Airlines. 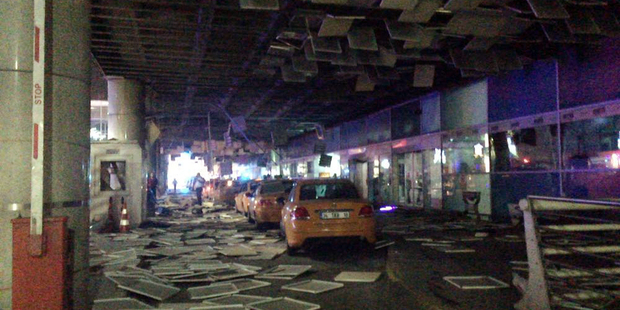 An entrance of the Ataturk Airport in Istanbul after the explosions. Photo / AP
"If the Islamic State is indeed behind this attack, this would be a declaration of war," said Soner Cagaptay, director of the Turkish Research Program at the Washington Institute for Near East Policy. "This attack is different: the scope, impact and deaths of dozens in the heart of the country's economic capital.
"It will have widespread ramifications," he said.
Turkish President Recep Tayyip Erdogan, who has depicted himself as a strong, conservative leader, "cannot afford to let this go," Cagaptay added.
Turkey has taken steps to battle the Islamic State, which grew strong amid the bloody civil war in neighboring Syria. But critics have faulted Turkey for its reluctance to take the fight to the extremists.
For years, Turkish security forces turned a blind eye to the militants who slipped across the border from Syria, where Islamist rebels and others have been battling forces loyal to Syrian President Bashar Assad.
Turkey wanted the Syrian leader to step down and also saw the militants as a bulwark against Syria's own autonomy-seeking Kurds. Turkey's ethnic Kurdish minority has long sought greater independence from the Turkish state, and the rise of a Kurdish enclave in northern Syria worries nationalist Turks, who fear it will inspire the Kurds in Turkey.
Fighters gathering on the Turkish-Syrian border - many of whom eventually joined the Islamic State - used Turkey as a crucial route for weapons, recruits and supplies. Lax enforcement along the frontier allowed the militants to develop sprawling networks inside Turkey, even as they grabbed land across Syria and Iraq. 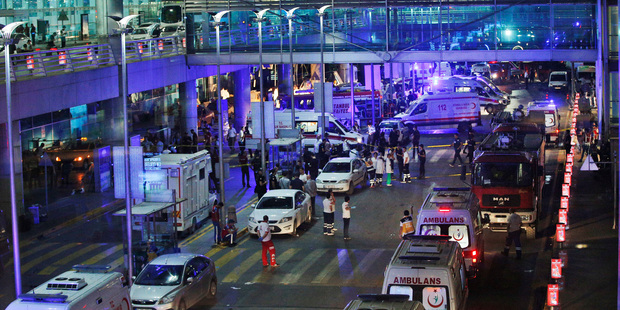 Security and rescue personnel gather outside Istanbul's Ataturk airport. Photo / AP
And when the detente between Turkey and the militants came to an end - when Turkey joined the U.S.-led coalition against the Islamic State and opened its Incirlik Air Base to U.S. aircraft - the networks were tapped for the new battle with the Turkish state.
The Islamic State has either claimed or been blamed for at least five major suicide attacks in Turkey in the past year, including the assault at the airport and two other bombings in Istanbul this year.
Now, the two sides are edging toward full-fledged conflict, analysts say.
"They went from a cold war to a limited war and are now moving towards full-scale war," Cagaptay said of Turkey and the Islamic State.
But among the questions is whether Turkey, a NATO member and U.S. ally, could actually escalate its role in the campaign in Syria. 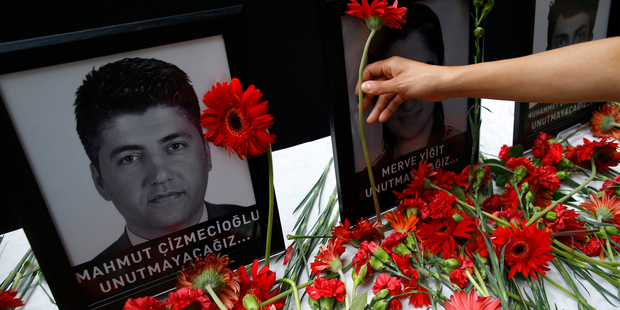 Photographs of victims displayed among carnations as family members, colleagues and friends gather for a memorial ceremony at the Ataturk Airport. Photo / AP
Turkey's airstrikes against Islamic State positions were suspended after Moscow, responding to Turkey's downing of a Russian jet that Ankara said was flying over its territory last October, threatened to shoot down Turkish planes over Syria. Since then, Turkey has flown only surveillance and reconnaissance missions in its own airspace.
Russia intervened in Syria last fall to prop up Assad in the face of the rebel onslaught.
This week, Erdogan met Russian President Vladimir Putin's demand for an apology for the shoot-down. The two spoke by phone Wednesday, the presidency here said, and Putin expressed his condolences for the victims of the Istanbul airport attack.
If Turkey wanted to engage with the Islamic State anywhere in northern Syria, "they cannot do it without Russia's blessing," Cagaptay said.
But even as Turkey mulls its options in the fight against the Islamic State, the latest bloodshed "unfortunately suggests the beginning of the type of attacks that are coming," he said.
"The capability of the Islamic State . . . is likely to continue to expand," said Ege Seckin, an analyst at IHS Country Risk, a political risk analysis firm.
And the size and nature of the militant cells in Turkey means preventing their attacks will be difficult, he added.
Get more trending information on Jokpeme News - Europe,US,Middle East,UK,Asia,Africa, Latin America,Entertainment & World News