United States of America's first national mammal is the bison 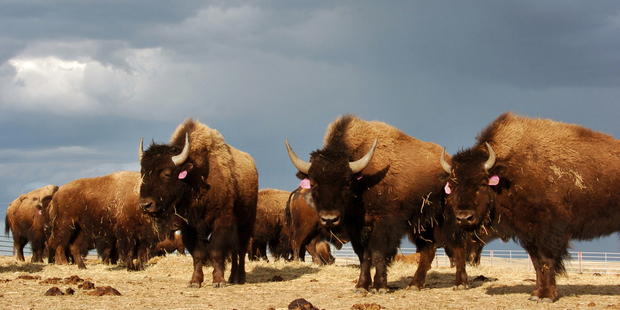 A herd of bison roam on the Fort Peck Reservation near Poplar, Montana. Photo / AP
North America used to be teeming with Bison.
But in one century, their numbers plummeted from tens of millions to just a few dozen in the wild after hunters nearly wiped out the continent's largest mammals.

The 15 Best Vancouver Restaurants
IDK DROPS POIGNANT NEW SINGLE “MONSIE…
Biden-Harris Administration Announces…
Wall Street Journal Crossword August …
Ahrefs CEO Answers SEO Questions Abou…
Now the bison has become the first national mammal of the United States.
Today, President Barack Obama signed into law the National Bison Legacy Act, which designates the bison as the official mammal of the United States. The legislation passed the House and Senate last month.
At a time of political gridlock and partisan bickering, legislators agree on an official national mammal.
The bison, which joins the bald eagle as a national symbol, represents the country's first successful foray into wildlife conservation.
Lobbying for the official mammal designation was a coalition of conservationists; ranchers, for whom bison are business; and tribal groups, such as the InterTribal Buffalo Council, which wants to "restore bison to Indian nations in a manner that is compatible with their spiritual and cultural beliefs and practices".
Cristián Samper, president of the Wildlife Conservation Society, which helped lead the effort, called the bison an "icon that represents the highest ideals of America: unity, resilience and healthy landscapes and communities."
ABOUT THE BISON DECLINE
1 Before the mid-1800s, bison (also called buffalo) lived mostly in the Great Plains, but were also found throughout the continent
2 The introduction of horses and guns accelerated the pace of bison hunting among Native Americans, who relied upon the animals for many uses.
3 With the westward expansion by white settlers and the pushing of Native Americans off their lands, the US Army led a campaign to wipe out bison as a way to control tribes
4 General Philip Sheridan, who commanded during the Indian Wars, responded: "Let them kill, skin and sell until the buffalo is exterminated."
5 Settlers also introduced cattle, and with them, diseases that impacted bison. Farming encroached upon bison's habitat. The animals' hides were worth good money. Tourists could even pay to shoot and kill bison through the windows of trains.
The Army tried to protect a few dozen bison living in Yellowstone National Park, and about 1000 more were owned privately. But other than that, "we fundamentally killed every bison," said John Calvelli, the Wildlife Conservation Society's executive vice-president of public affairs.
"We had taken this animal that was an incredibly important symbol of our country, of America, and incredibly important, religiously, for Native Americans - we got to the point when these animals were on the brink of extinction," Calvelli said.
Then came the conservationists.
William Hornaday, founder of the American conservation movement and the first president of the Wildlife Conservation Society, travelled to Montana in 1886 to get some bison to display at the Smithsonian Institution. He was shocked to see their numbers decimated.
Three years later, he wrote "The Extermination of the American Bison," which helped drum up support to save the bison.
"Between the Rocky Mountains and the States lying along the Mississippi River on the west, from Minnesota to Louisiana, the whole country was one vast buffalo range, inhabited by millions of buffaloes," he wrote, adding that their near-annihilation was due in part to "man's reckless greed, his wanton destructiveness, and improvidence in not husbanding such resources as come to him from the hand of nature ready made."
The first federal legislation protecting bison was enacted in 1894; killing bison was punishable by imprisonment. Hornaday became director of the Bronx Zoo in 1896, and with the help of President Theodore Roosevelt and other supporters, the American Bison Society was started to breed bison for wild reserves.
Hornaday explained why it would be necessary to transport a handful of bison to a zoo to help keep the species alive, writing that "the total expense would be trifling in comparison with the importance of the end to be gained, and in that way we might, in a small measure, atone for our neglect of the means which would have protected the great herds from extinction."
The approach was a success. With funds approved by Congress, the zoo donated 15 bison to a reserve in Oklahoma.
Today, bison live in every state. Just a handful of bison lived in Yellowstone National Park during the 1800s; that population has swelled to roughly 4900, and officials are now required to control the bison population. Culling has become a routine - and controversial - method to keep the bison numbers in check, as rules prevent relocating the bison to private lands.
An estimated 20,000 bison live on public lands in North America. An additional 162,110 live on private farms and ranches, according to the 2012 US Department of Agriculture census.
"We look at it as a conservation story, but to Native Americans, it's also about making peace with the past," Calvelli said. "Many of those bison were actually killed to help drive Native Americans to reservations. . . . Now, 100 years later, we as a nation are recognizing this symbol."
Get more trending information on Jokpeme News - Europe,US,Middle East,UK,Asia,Africa, Latin America,Entertainment & World News

United States of America's first national mammal is the bison