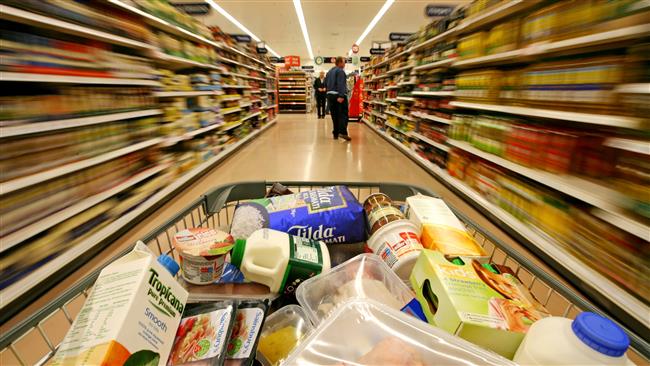 Consumers shopping at a supermarket in the UK (file photo)
Rising levels of Inflation coupled with lackluster wage growth have led UK Consumer confidence to fall, according to a new survey, nearly a year after 52 percent of Britons voted to leave the European Union.
According to the study by research firm Deloitte, overall confidence barometer showed Minus seven percent for the first quarter of 2017, down one percent from the minus six percent in the previous quarter.
Deloitte also reported that four of its six measures of consumer optimism had dropped during the same period, with confidence in disposable income hitting a two-year low at minus 17 percent. This is while, inflation missed Bank of England’s target.
“Since last summer’s EU referendum consumer spending has held up well, but with inflation rising and nominal wage growth starting to slow, consumers are beginning to feel a squeeze on their disposable income,” Ian Stewart, chief economist at Deloitte, said.
“In March, the rate of inflation stood at 2.3 percent, above the Bank of England’s 2 percent target and the highest in more than two years. There are already some signs that these pressures are contributing to a slowdown in consumer activity,” he added.
Deloitte’s consumer tracker also registered a decrease in consumer spending, where spending on discretionary items had dropped by four percentage points to minus four percent.
Ben Perkins, head of consumer research at Deloitte, blamed the trend on less disposable income, which forced consumers “to consider whether to trade down, buy less or borrow more.”
The robustness of the UK’s consumer-led economy in the wake of the EU vote was questioned in March, after retail sales saw their biggest quarterly fall in seven years.
The government of UK Prime Minister Theresa May has been harshly criticized for the way it is handling Brexit.
The immense criticism led May to request early general elections to gain more authority in the EU talks, a motion that was approved by Parliament. The vote will be held on June 8.

CBD 2020: What to Expect + Our Top Pr…
How to Create a Winning Black Friday …
Stablecoins Claimed to Be Securities
AMD Ryzen 9 3950X Reportedly Beats th…
What is Black Hat SEO and how can thi…
Get more trending information on Jokpeme News - Europe,US,Middle East,UK,Asia,Africa, Latin America,Entertainment & World News