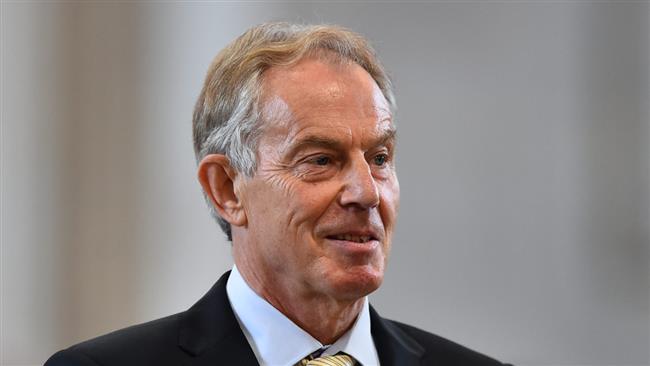 Former UK Prime Minister Tony Blair
Former British Prime Minister Tony Blair has called on registered Labour Party voters to break ranks and Vote Tory or Liberal Democrat in the upcoming general election, further challenging Jeremy Corbyn’s troubled leadership over the main opposition party.
In an interview with BBC on Sunday, Blair said the issue of getting more members of parliament who could oppose Prime Minister Theresa May’s possible hard Brexit deal was now “bigger than party allegiance.”
“The absolutely central question at this general election is less who is the prime minister on June 9, and more what is the nature of the mandate,” he said.
“Otherwise frankly this is a steamroller election – is it possible that we can return as many members of parliament as possible to parliament that are going to keep an open mind on this Brexit negotiation until we see the final terms.”
Last week, May called for snap general elections to gain a stronger mandate for Britain's withdrawal from the European Union. The request was approved by the Tory-dominated parliament, as the House of Commons voted 522 to 13 to pass the motion.The election will be held on June 8, nearly a year after 52 percent of Britons voted to leave the European Union (EU). The current parliament will dissolve on June 3.
Return to politics
Blair, who was elected PM three times as Labour leader, has positioned himself to join forces with Lib Dems against May, indicating a comeback to politics.
“I look at the British political scene at the moment and I actually almost feel motivated to go right back into it,” he told BBC on Sunday.
When asked whether he was encouraging people to vote for Lib Dems as his new party, Blair gave an evasive answer.
“What I’m advocating may mean that. It may mean voting Labour. It may mean, by the way, that they Vote Tory, for candidates who are prepared to give this commitment,” he argued. “This is something that’s bigger than party allegiance, in this particular election.”
The former premier, who risks indictment over his role in the US-led invasion of Iraq in 2003, insisted that he “will always vote Labour.” 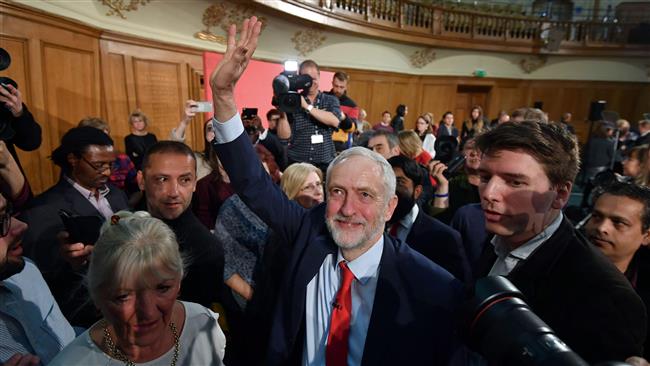 British opposition Labour Party leader, Jeremy Corbyn, waves after delivering his first campaign speech of the 2017 election in central London on April 20, 2017. (Photo by AFP)
Blair's comments prompted outrage on social media, with some party members calling for him to be fired for backing rival candidates in breach of the party’s rule-book.
“On 9 June, we will either have a Labour government or a Tory one. If you want Brexit to be used to turn Britain into a low-wage tax haven, vote Tory. If you want a Britain for the many not the few after Brexit, vote Labour. The choice is clear,” said a Corbyn spokesman.
Corbyn, who is struggling to close a wide popularity gap with the ruling Tories, has pledged to turn the page and win the vote.