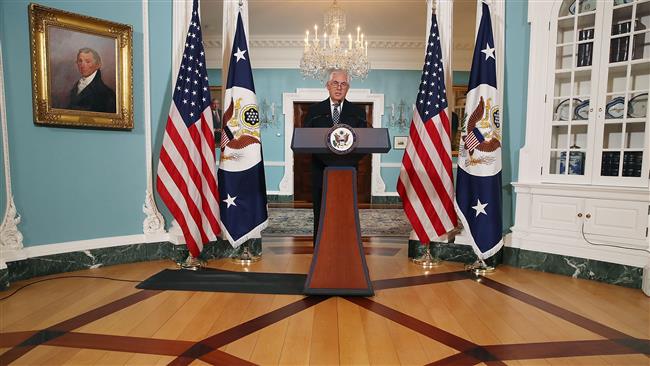 US Secretary of State Rex Tillerson speaks at the State Department on April 19, 2017 in Washington, DC. (Photo by AFP)
US Secretary of State Rex Tillerson says Russia’s “actions” in eastern Ukraine serve as an “obstacle” in ties between the administration of US President Donald Trump and the Kremlin.
Tillerson, who recently visited Russia, made the comments during a phone conversation with Ukrainian President Petro Poroshenko on Sunday, according to acting spokesman Mark Toner.
“Secretary Tillerson phoned Ukrainian President Petro Poroshenko today to discuss his recent trip to Moscow and his message to the Russian leadership that, although the United States is interested in improving relations with Russia, Russia’s actions in eastern Ukraine remain an obstacle,” Toner said.
He added that the former ExxonMobil CEO also accepted the Ukrainian president’s “condolences” in regard to the Sunday death of an American monitor with the Organization for Security and Co-operation in Europe, who hit a landmine in eastern Ukraine. 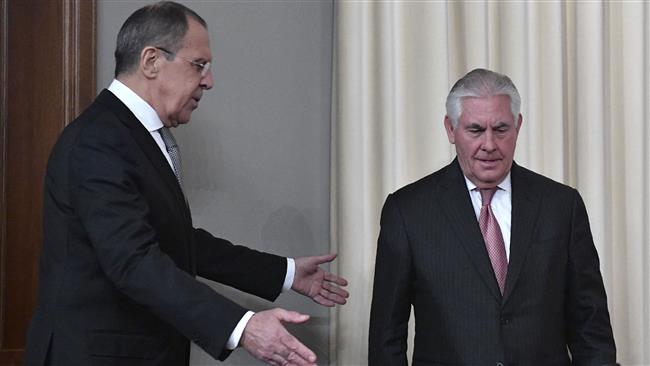 Russian Foreign Minister Sergei Lavrov (L) and US Secretary of State Rex Tillerson arrive to attend a press conference after their talks in Moscow on April 12, 2017. (Photo by AFP)
Toner further reiterated Washington’s “firm commitment to Ukraine’s sovereignty and territorial integrity and confirmed that sanctions will remain in place until Russia returns control of the Crimean peninsula to Ukraine and fully implements its commitments in the Minsk agreements,” adding that Tillerson also “emphasized the importance of Ukraine’s continued progress on reform and combating corruption.”
Crimea declared independence from Ukraine on March 17, 2014 and formally applied to become part of Russia following a referendum, in which 96.8 percent of participants voted in favor of the move.
After Crimea rejoined Russia, an armed conflict broke out in eastern Ukraine when Kiev launched military operations to quell similar pro-Russia sentiments there. Ukraine accuses Moscow of involvement in the conflict, a charge Russia has denied.
Trump, who has called for better relations between the Kremlin and the White House, said prior to his election victory that "The people of Crimea, from what I've heard, would rather be with Russia than where they were."