Donald Trump secures the 270 Electoral College votes necessary to be declared as the president of the United States.
Electors sealed the Republican president-elect's victory with 304 votes. Despite mounting pressure to break away from Trump, only a pair of Texan GOP electors did so by voting for former Representative Ron Paul and Ohio Governor John Kasich. 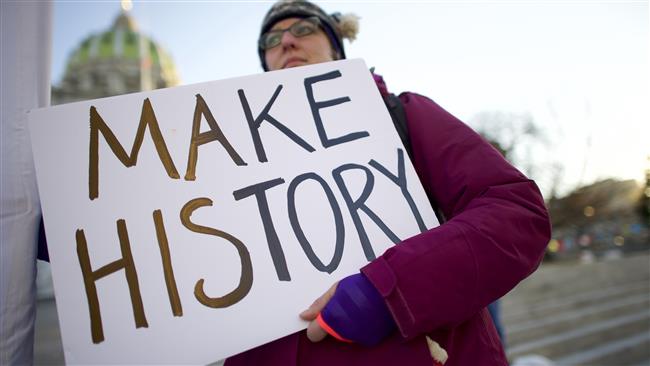 A protester demonstrating outside the Pennsylvania Capitol Building before electors arrive to cast their votes from the election on December 19, 2016 in Harrisburg, Pennsylvania. (Photo by AFP)
The Electoral College officially announced the New York billionaire as the 45th president of the country.
The vote clears the way for the reality TV star and real estate tycoon to succeed Barack Obama on January 20, 2017, after beating his opponent, Hillary Clinton, on November 8.
The electors gathered in every state capital as well as Washington, DC, to formally elect the president.
"Congratulations to @realDonaldTrump; officially elected President of the United States today by the Electoral College!" tweeted Vice President-elect Mike Pence.
The vote came as Democrats were engaged in efforts to highlight the idea that Trump had won the White House through Russian support, an allegation denied by both Moscow and the Trump campaign. 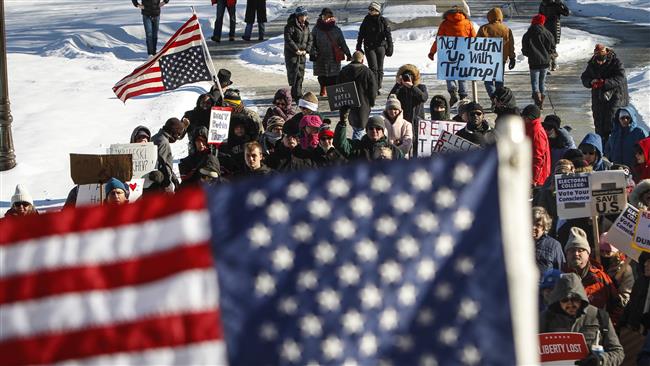 Protesters rally at the Michigan State Capitol before the state electoral college met to cast their votes on December 19, 2016 in Lansing, Michigan, United States. (Photo by AFP)
Trump lost the popular vote to Hillary by a 2.8-million difference on the Election Day.
"The basis of this is the people's vote. The people voted and they place their vote as they should and had a right to on November the 8th and that is the basis of the vote that we placed today in my mind I place that vote for the people of Pennsylvania who voted in a certain way," said Pennsylvania State Elector Tina Pickett in Harrisburg, where the electors were meeting.
"Vote your conscience, He's not our President," chanted the protesters outside.
"I realized they were saying things but I don't really focus on it. I thought you know the ceremony got really formal and at that point they know they're not going to change anything so probably they got a little bit over the top at that point. But as far as you know the things that they've done to make their viewpoints heard and read and so forth in the last several weeks, that's, that's fine," Pickett said.
Get more trending information on Jokpeme News - Europe,US,Middle East,UK,Asia,Africa, Latin America,Entertainment & World News

10 Proven Ways to Feel Confident with New Braces at College