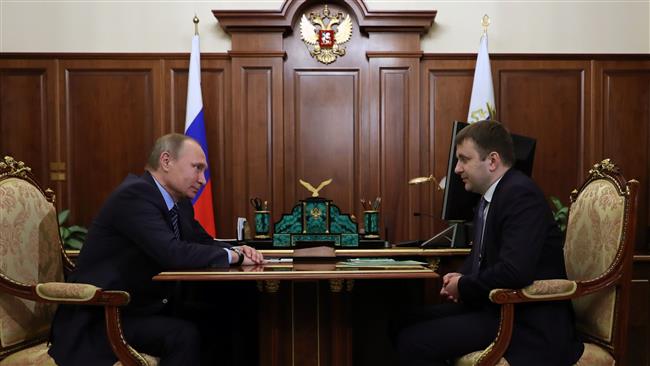 Russian President Vladimir Putin (L) meets with the deputy finance minister and the future economy minister, Maxim Oreshkin, at the Kremlin in Moscow on November 30, 2016. (Photo by AFP)
Russian President Vladimir Putin has elevated a relatively young former banker to the position of economy minister.
Putin on Wednesday appointed Maxim Oreshkin, Russia’s current Deputy Finance Minister, as the economy minister, calling him a “mature” manager.
“I want to offer you the position of economic development minister,” Putin told Oreshkin, adding, “You haven't been working long, but... you are working successfully.”
Oreshkin worked in Russia’s banking sector before joining the finance ministry in 2013. He is only 34 and has served as deputy finance minister since last year.
Putin said despite his young age, Oreshkin was “a mature, experienced specialist.”
Oreshkin has made a good reputation over the past two years for helping Russia out of recession, especially at a time when the Russian economy was suffering from lower international oil prices and sanctions by the West over the crisis in Ukraine.
The young man ensured Putin on Wednesday that the worst had been over for the Russian economy but lamented that the country has yet to grapple with low growth rates.
“Therefore the main task for the next year is to prepare key measures that will remove structural obstacles to the Russian economy's growth and let it move forward,” he said.
Oreshkin replaces Alexei Ulyukayev, who was fired this month after being slapped with charges of taking a $2-million bribe. Ulyukayev is currently under house arrest. The 60-year-old had served as economy minister since 2013.