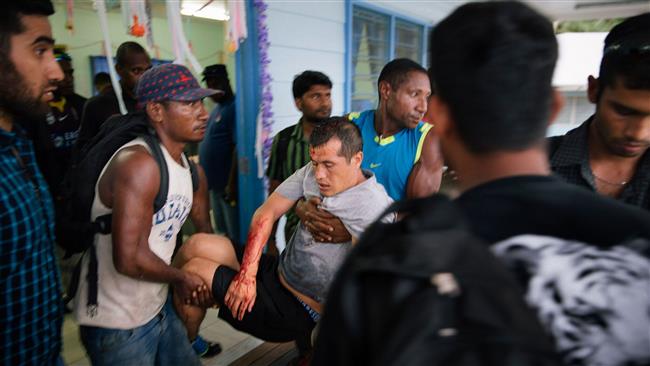 File photo of an injured Afghan refugee (C) from an Australian detention facility in Manus Island being carried by two men after he was allegedly attacked by a group of Papua New Guinean men while out on a day release. (AFP photo)

Witnessing an Aggressive Event
Well said Mr. PM, We’re racing with t…
Pineapple juice benefits for skin
What You Need to Know About Sydney Ep…
How To Invest in Real Estate With no …
The United Nations Human Rights office has demanded that Australia end its indefinite detention of refugees held on the Central Pacific island country of Nauru amid persisting reports of abuse against the captives.
Censuring Australia’s controversial offshore detention policies, new Pacific representative of UN Human Rights Office of the high commissioner, Chitralekha Massey, referred to continued captivity of asylum seekers at Nauru as “unsustainable, … a violation, and … unnecessary,” the UK-based daily,The Guardian, reported Friday.
Her remarks came in an interview with the British daily in which she called on the Australian government to demonstrate “political courage” and bring an end to the detention of men, woman and children on Nauru, where hundreds of asylum seekers languished in “not only prolonged, but indefinite” captivity.
Pointing to continuing reports of abuse, self-harm and sexual assault at the detention facility which had created an alarming environment there, Massey insisted that the issue needed to be resolved and that the asylum seekers at the center had to be given the opportunity to resettle in Australia or another country if they had been found to be refugees. 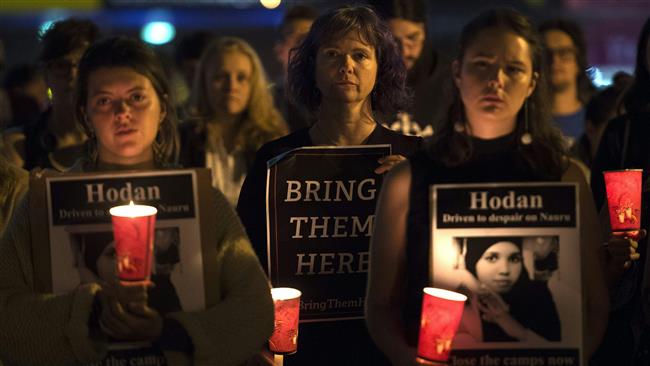 Participants hold a candle light vigil for two refugees, a Somali woman and an Iranian man who set themselves on fire on the remote Pacific island of Nauru, in Sydney on May 4, 2016. (AFP photo)
According to the daily, Massey’s team completed an inspection of the Nauru facility in August 2016. She said the situation in the past two years had been “aggravated even further” based on the observations of the team’s latest visit.
“We have repeatedly reported our concerns around healthcare, around education, access to justice,” she emphasized.
“We are particularly concerned about the sexual violence and the number of rapes against women, against children, the amount of self-harm that is really an indicator of how bad the mental health of people has deteriorated,” Massey added.
She further underlined, “It’s difficult for me to find words to describe how somebody can go from being at a breaking point and just continue to be at a breaking point endlessly. There is an urgent response required.”
Reacting to recent remarks by Australia’s Immigration Minister Peter Dutton that the nation’s regional processing relationship with Nauru would continue for “decades,” Massey said, “It’s already unacceptable.”
This is while the UN office also remains focused on other aspects of Australia’s approach to human rights. Massey stated that her office continues to be concerned about the juvenile justice system, Indigenous affairs and gender-based violence in the community.
“We are very concerned that juvenile justice seems to be almost the norm rather than the exception,” she said.
She further pointed out that while the Nauru detention facility moved to an “open center” arrangement in October 2015, asylum seekers held on the island still lived in “militarized, police-like” arrangements. She also called on Australia to adopt a greater regional role in bolstering the human rights framework of neighboring Pacific countries.
Get more trending information on Jokpeme News - Europe,US,Middle East,UK,Asia,Africa, Latin America,Entertainment & World News


This post first appeared on Alexa Nigerian News And General Viral World News & Entertainment - Europe,US,Middle East,UK,Asia,Africa,Latin America., please read the originial post: here
People also like
Witnessing an Aggressive Event
Well said Mr. PM, We’re racing with time but..
Pineapple juice benefits for skin
What You Need to Know About Sydney Epoxy Flooring
How To Invest in Real Estate With no Money in 2023
Fitness Routines For Busy Professionals
Ways To Make Money From Home
Zainstaluj pakiet Office na wszystkich komputerach
Medical Equipment for Molecular Diagnostics Lab
Comparison Between The 3rd Ranked & 2nd Ranked Framework: Flutter Vs Angular
This Is What You Should Do If You’re Laid Off