After claiming he was attacked and wounded by an ISIL supporter, Paris teacher now admits he made up the story. 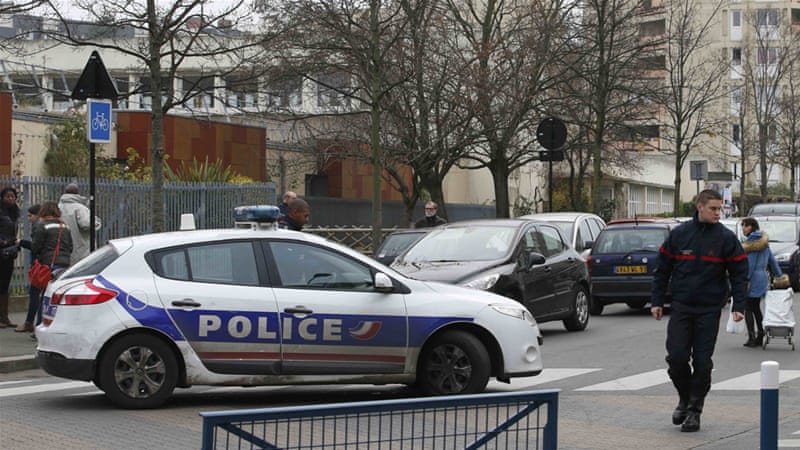 The claimed attack set off a manhunt in Aubervilliers, northeast of Paris [Charles Platiau/Reuters]
A French Teacher who claimed he was attacked in his classroom by an Islamic State of Iraq and the Levant (ISIL) supporter admitted to prosecutors on Monday that he invented the story.
Earlier on Monday, sources in the police and prosecutor's office told the media the teacher had been attacked by a balaclava-wearing man wielding a box-cutter and scissors.
"This is Daesh. This is a warning," the man was said to have shouted, according to the local prosecutor. Daesh is another name for ISIL.
The claimed attack by the 45-year-old nursery school teacher set off a manhunt in Aubervilliers, northeast of Paris.
Both the Paris prosecutor's office and the local prosecutor said the teacher - who was hospitalised with light wounds to his side and throat - was being questioned on why he lied about the attack. It was unclear how the man sustained his injuries.
"He is being interviewed with a view to establishing the reasons for this invented story," an official told Reuters news agency.
ISIL claimed responsibility for the November 13 attacks in Paris that killed 130 people and wounded hundreds of others.

7 reasons I’m tired of being tired
You Say Covid-19, I Say Hangar 18!
طريقة عمل طاجن النوتيلا
Can CBD Be Used to Fight Coronavirus …
Qualities Of The Best Dentist in Syra…