On 12 July 2016, the Permanent Court of Arbitration rendered its decision on the Philippines v. China case over disputes in the South China Sea. Capturing worldwide attention, the ruling was made largely in Manila’s favour. Yet overshadowed by this event was another milestone in Manila’s foreign relations: the 40th anniversary of the establishment of diplomatic relations between the Philippines and Vietnam.

CBD 2020: What to Expect + Our Top Pr…
Why Friday The 13th Will Be Your Luck…
Vechain Blockchain Technology Powers …
How To Get From Lima To Cusco Peru {T… 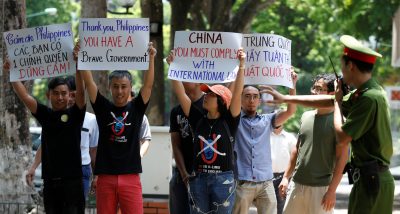 In recent years, the two Southeast Asian countries have forged closer ties largely because of China’s increasing assertiveness in the South China Sea. Concerned with Beijing’s attempts to solidify its claims in the disputed waters, Manila and Hanoi pursued efforts to enhance their security cooperation, which culminated in the signing of a joint statement on the establishment of a strategic partnership (JSESP) on 17 November 2015.

Although encompassing other areas of cooperation, the JSESP has a particular focus on defence and security. The strategic partnership aims to promote a ‘peaceful, stable and resilient region’ against the backdrop of an ‘evolving political, economic and security architecture’ in the Asia Pacific.

After the Tribunal’s decision was released, Vietnam announced that it welcomes the ruling, which Hanoi earlier considered to lay the ‘foundations for peaceful settlement’ of the dispute. Vietnam also reiterated that it is considering a similar legal action against China.

Although the decision is final and binding, the fact remains that it cannot be enforced. Thus, to achieve the case’s objective of ‘peace, security and good neighborliness’ in the South China Sea, the Philippines must now carefully recalibrate its relations with China as well as with its allies and strategic partners, including Vietnam. Although planning to engage Beijing, Manila must also ensure that its strategic partnership with Hanoi is sustained for their common strategic interests. In this regard, the JSESP can play a role in de-escalating tensions in the disputed waters.

For example, Hanoi might share to Manila the details of its dispute management mechanisms with Beijing. The JSESP is built upon existing Philippine–Vietnam bilateral agreements, including the Memorandum of Agreement between the two countries’ defence establishments, under which the parties agreed to have ‘exchange of experiences’ during their bilateral visits.

As the new Duterte administration plans talks with Beijing, Philippine officials may consider their Vietnamese counterparts’ dispute management mechanisms with China, specifically the use of hotlines to prevent or de-escalate tensions in the South China Sea. Hanoi and Beijing have a total of four hotlines for their agriculture, defence and foreign ministries, and one between the general secretaries of their communist parties.

Although these forms of engagement have limitations, as seen in the 2014 oil rig incident, these communication lines must be kept open to repair relations and pursue negotiations during times of crisis. These mechanisms may also help in minimising the spill-over effect of the disputes in other areas of the Sino–Philippine relationship.

At the multilateral level, the Philippines and Vietnam may propose other measures to manage disputes. Under the JSESP, the two countries agreed to ‘enhance cooperation in multilateral military and defence fora’. These include the ASEAN Defence Minister’s Meeting (ADMM) and ADMM-Plus. But it must be noted that the South China Sea dispute has exposed some of the divisions among ASEAN member states, which could affect the organisation’s efforts in promoting its centrality in the regional security architecture. The occasional lack of issuance of joint statements because of the South China Sea dispute and the prolonged negotiations of the proposed Code of Conduct are indications of ASEAN’s internal divisions.

These setbacks are partly because of ASEAN’s consensus-based decision-making system. This may also be a reason why ASEAN cannot issue a strongly worded statement regarding the dispute. Still, it is possible for ASEAN to initiate measures that will not undermine its efforts to promote its centrality.

With support from Vietnam, Manila, as the 2017 ASEAN chair, may propose the inclusion of the ‘Plus’ countries in the ADMM’s Direct Communication Link initiative, which aims to provide a direct hotline among the ASEAN states’ defence ministers. As the ‘highest ministerial defense and security’ mechanism in ASEAN, the ADMM can provide guidance to the direct military-to-military interaction platforms, such as the ASEAN Navy Interaction, to conduct exercises on rules of engagement like the Code for Unplanned Encounters at Sea.

Manila and Hanoi could also cooperate on the exchange of information regarding coastal defence. The JSESP holds that the two countries shall ‘enhance the capability of both sides to combat traditional and non-traditional security threats’. Although engaging Beijing, Hanoi recognises that a balance of power with China, anchored on Vietnam’s own military capabilities and those of key regional players, would contribute to stability in the South China Sea.

As part of its military modernisation program, Vietnam pushed for the enhancement of its coastal defence with the acquisition of ‘anti-ship artillery batteries and the mobile Bastion K-300P [coastal defence missile] system’. Along with other assets, these acquisitions raised the costs of China’s assertiveness along Vietnam’s claimed exclusive economic zone.

Through their bilateral engagements, Philippine officials may consider pursuing elements of the Vietnamese coastal defence system for the Philippines. Manila had previously envisioned a similar initiative in its proposed Shore-Based Missile System project. The importance of such technology for coastal defence was highlighted when the US military used a similar system, the High Mobility Artillery Rocket System, during the 2016 Balikatan Exercises.

Recent developments in the South China Sea strongly suggest that Manila and Hanoi are at the receiving end of Beijing’s assertiveness. Though these two ASEAN countries have overlapping claims in the South China Sea, their differences will likely be muted in the foreseeable future and the Vietnam–Philippines strategic partnership can play a role in managing the dispute.

Mico A Galang is a researcher at the National Defense College of the Philippines (NDCP). The views expressed are of the author’s alone and do not necessarily reflect the official position of NDCP.