President Trump Sends Letter To 11 Year Old Girl Whose Teacher Would Not Allow her To Write About The President As Her Hero... 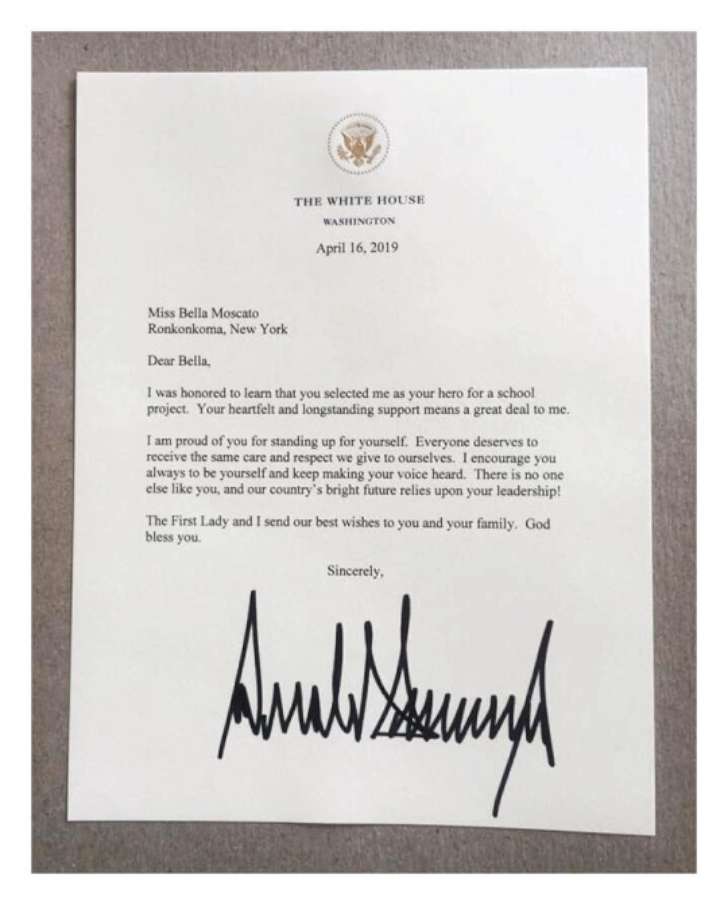 "I am proud of you for standing up for yourself. Everyone deserves to receive the same care and respect we give to ourselves. I encourage you always to be yourself and keep making your voice heard. There is no one else like you, and our country's bright future relies upon your leadership!"
STORY:
Mom says daughter couldn't use resident Trump for hero project
A Lake Ronkomkoma mother claims her daughter was not allowed to have President Donald Trump as her hero for a class assignment.
When sixth-graders at Samoset Middle School were assigned to pick a hero on whom they would write a report, 11-year-old Bella Moscato said her choice was a no-brainer.

"Donald Trump is my hero," she says.

The 45th U.S. president has been Bella's idol since she was 8 years old, which is why she dressed up as Trump for a third-grade class project. But Bella says when she told her sixth-grade teacher that Trump was her choice for the hero project, the teacher nixed the idea.

Bella says her teacher said Trump "spreads negativity and says bad stuff about women" in front of another teacher and students in the class. The teacher told her to pick another hero.

Bella's mother, Valerie Moscato, says she was outraged when her daughter called her from school about the incident. She says what the teacher did amounts to intimidation and censorship.

Arthur Moscato, the girl's father, says he can't believe someone would tell his daughter that the current U.S. president cannot be her hero.

President Trump Sends Letter To 11 Year Old Girl Whose Teacher Would Not Allow her To Write About The President As Her Hero...