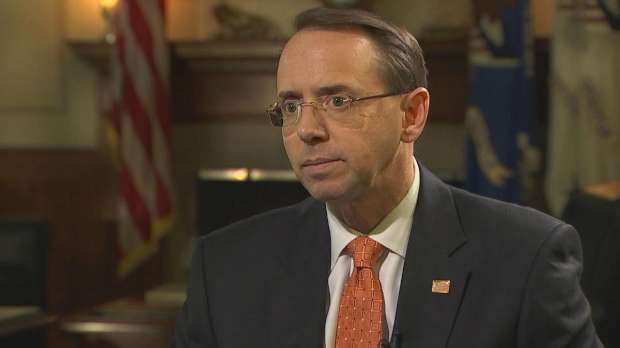 In an interview with a local D.C. TV station, Rod Rosenstein admired the monster he created, who now runs an alleged investigation into supposed Russia-Trump collusion but which quickly morphed into what amounts to a silent coup against a sitting President of the United States:

The U.S. Department of Justice official who appointed special Counsel Robert Mueller to investigate Russian efforts to influence the 2016 presidential election said he is satisfied with the special counsel’s work….

Rosenstein has much to be accountable for. Yes, Virginia, this is a witch hunt. Robert Mueller III was appointed special counsel after his friend, the vindictive former FBI Director James Comey, committed a federal crime by leaking a memo which was a government record to the press. Mueller has picked staff and prosecutors as if he were stocking Hillary Clinton’s Department of Justice. He has picked a bevy of Clinton donors, an attorney who worked for the Clinton Foundation, a former Watergate assistant prosecutor, and even a senior advisor to Eric Holder. Objective professionals all.

Thanks to Rosenstein, Mueller is in fact colluding with Comey and Clinton moles to enact revenge on President Trump for Comey’s firing, something which even Comey said Trump was constitutionally entitled to do. There is no evidence of collusion with Russia or obstruction of justice. It is not obstruction of justice for a President to exercise his legal and constitutional authority.


The facts and the lack of an actual crime will not stop Robert Mueller. Just show him the man, or woman, and he will show you the crime. As Professor Alan Dershowitz writes in the Washington Examiner:

Special counsel Robert Mueller was commissioned to investigate not only crime but the entire Russian "matter." That is an ominous development that endangers the civil liberties of all Americans.

Federal prosecutors generally begin by identifying specific crimes that may have been committed -- in this case, violation of federal statutes. But no one has yet identified the specific statute or statutes that constrain Mueller's investigation of the Russian matter. It is not a violation of any federal law for a campaign to have collaborated with a foreign government to help elect their candidate….

One does not have to go back to the Soviet Union and Lavrentiy Beria's infamous boast to Stalin, "Show me the man and I will show you the crime," in order to be concerned about the expansion of elastic criminal statutes. There are enough examples of abuse in our own history.

From McCarthyism to the failed prosecutions of Sen. Ted Stevens, Rep. Thomas DeLay, Gov. Rick Perry and others, we have seen vague criminal statutes stretched in an effort to criminalize political differences.

Indeed, now we here reports that Mueller’s investigation will range anywhere from Jared Kutchner’s finances to perhaps any unpaid parking tickets Sean Spicer may have.

Rosenstein is apparently satisfied with what amount to moles from Team Clinton being involved in both the sham collusion investigation and the Comey coverup of Hillary Clinton’s crimes with the head mole being one Peter Strzok. As Byron York reports in the Washington Examiner:

House Intelligence Committee chairman Devin Nunes has issued an angry demand to the FBI and Department of Justice to explain why they kept the committee in the dark over the reason Special Counsel Robert Mueller kicked a key supervising FBI agent off the Trump-Russia investigation.

Stories in both the Washington Post and New York Times on Saturday reported that Peter Strzok, who played a key role in the original FBI investigation into the Trump-Russia matter, and then a key role in Mueller's investigation, and who earlier had played an equally critical role in the FBI's Hillary Clinton email investigation, was reassigned out of the Mueller office because of anti-Trump texts he exchanged with a top FBI lawyer, Lisa Page, with whom Strzok was having an extramarital affair. Strzok was transferred to the FBI's human resources office -- an obvious demotion -- in July.

Strzok was everywhere, throwing sand into the wheels of justice at every opportunity to protect Hillary Clinton and her operatives:

Strzok was one of the leaders of the FBI’s investigation into Hillary Clinton’s use of a private email server, and he participated in interviews with a number of Clinton’s top aides, including Huma Abedin and Cheryl Mills, as well as Clinton’s own interview with the FBI.